A court order has unsealed documents giving new information on a March 5 shooting in Farmington that left one man dead.

The victim was shot once by a firearm 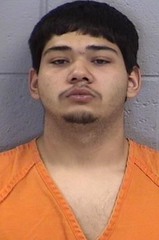 FARMINGTON — A court order has unsealed documents giving new information on a March 5 shooting in Farmington that left one man dead. A judge last month ordered he suspect be freed from the county jail on conditions of release.

San Juan County Chief Deputy District Attorney Dustin O'Brien told The Daily Times the DA's Office believes the man should have been held without bond, and the court disagreed.

Shellie Patscheck, the suspect's public defender, said the only evidence against her client is a statement of a witness that Judge Weaver deemed to not be a credible witness.

Isiah Ontiveros, 18, has been charged with one count of first-degree murder and two felony counts of tampering with evidence, according to court documents.

Ontiveros is accused of shooting 31-year-old Nathaniel Tracy once around 6:48 p.m. on March 5 in the 300 block of North Monterey Avenue, according to the arrest warrant affidavit.

The narrative portion of the Affidavit for Arrest Warrant was unsealed earlier this week in Farmington Magistrate Court. The case was sealed to protect the identity of the witnesses interviewed, according to an audio recording of a March 22 hearing in Farmington District Court.

Weaver stated in her written order the prosecution did not meet the burden of proof by clear and convincing evidence, and a pre-trial risk assessment was ordered.

In the March 27 order, Weaver ordered Ontiveros be released on conditions of release.

Patscheck said her client was released on March 25 or 26.

Different versions of the shooting

The arrest warrant affidavit filed on March 12 provides a look into the shooting investigation.

The detective stated in the affidavit Ontiveros shot Tracy once in the victim's "upper left side" during an altercation, and that he was shot in close proximity.

A witness stated she saw a male not charged in the case driving a silver passenger car with Ontiveros in the front passenger seat.

The men allegedly drove to North Monterey Avenue to confront Tracey and an altercation occurred.

While interviewing Ontiveros and the other male, the court document states three versions of events were shared.

The first version was Ontiveros and the male were in a vehicle when Tracy confronted them by reaching into the car and that was how he was shot.

The second version was Ontiveros got out of the vehicle and shot Tracy because Tracy was reaching for something in his pocket.

The third version was that Ontiveros had the firearm and accidentally shot Tracy, according to court documents.

A spent .40 caliber casing was found near Tracy at the scene. Tracy was transported to San Juan Regional Medical Center where he died.

The female witness told a detective the men left North Monterey Avenue and headed to a residence on the 300 block of North Buena Vista, one block east of Monterey.

Ontiveros told a woman at the residence he needed to get rid of the gun because he just "clipped someone and the gun was hot," according to court documents.

The men allegedly made efforts to destroy their clothing and the shoes they were wearing that night.

Ontiveros' preliminary hearing is scheduled for the morning of April 29 in Aztec District Court.