A man who brought a rifle to a child custody exchange has been charged with murder after deputies found his young child dead inside an apartment. 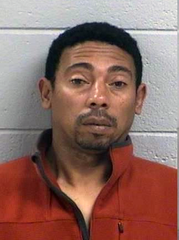 FARMINGTON — A Farmington man has been charged with murder and is accused of killing his five-year-old son after the child was found in a Farmington apartment.

Fernando Azofeifa, 45, has been charged with first-degree murder and aggravated assault, according to a San Juan County Sheriff's Office press release.

The press release details a search for Azofeifa after deputies learned he pointed a rifle at a man during custody exchange involving the mother of his child on Saturday in Kirtland.

A warrant was issued for Azofeifa's arrest on the aggravated assault charge and deputies started to search for him.

He was later located Sunday afternoon at a Farmington apartment.

The child's mother received a text message from Azofeifa around 1 p.m., stating she would never see her son again, according to the press release.

Deputies then knocked on the door of the apartment and took Azofeifa into custody.

The deceased child was located while Azofeifa was being taken into custody.

Azofeifa confessed to the murder during an interview with detectives.

The press release states Azofeifa is employed at the Riverview Golf Course in Kirtland as a Golf Professional.

San Juan County Spokesperson Devin Neeley said the golf course has started the process to terminate him from his position.

FARMINGTON — A man who the San Juan County Sheriff’s Office said brought a rifle to a child custody exchange and pointed it at another man has been charged with murder after deputies who arrested him Sunday found his young child dead inside an apartment.

Deputies executed a warrant for aggravated assault with a deadly weapon Sunday following the Saturday incident in Kirtland and arrested 45-year-old Fernando Azofeifa, who they say pointed a rifle at another man during the custody exchange involving his 5-year-old son.

“A warrant was issued for aggravated assault with a deadly weapon and deputies immediately began searching for Fernando,” according to a release by Sheriff’s Office spokesperson Jayme Harcrow.

The release said deputies searched through the night for the suspect and found him in an apartment in Farmington Sunday afternoon.

“A text message was sent from Fernando to the mother of his child on Sunday around 1 p.m., stating that she would never see her son again,” the release stated. When deputies arrested Azofeifa they found the child dead inside the apartment.

Detectives took over the scene after Azofeifa was arrested. They said he confessed, and he was charged with first-degree murder.

He is being held in the San Juan County Adult Detention Center.

The suspect is employed by the Riverview Golf Course in Kirtland.

The Sheriff’s Office said more information will be released as it becomes available. They did not return calls this morning.  This is a developing story.