Suspect shot at officers, killed himself in 5-hour standoff

A warrant was being served at a Farmington residence Monday when a man fired multiple rounds at officers, leading to a standoff

Suspect shot at officers, killed himself in 5-hour standoff

Male suspect had warrant for charges out of Colorado 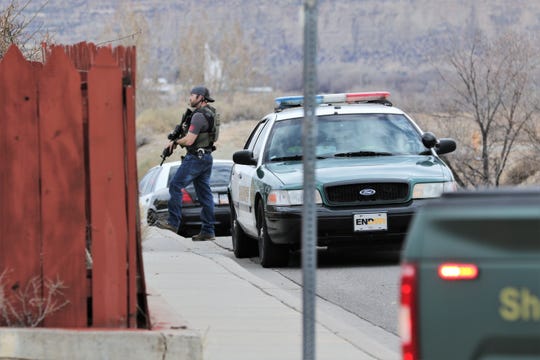 An officer with a U.S. Marshals Service vest proceeds to a police standoff with an armed male suspect who was later found dead Monday night in a residence on Yale Drive in Farmington. (Photo: Joshua Kellogg/The Daily Times)

FARMINGTON — Local law enforcement and federal officials were serving a warrant at a Farmington residence Monday when the man they sought fired multiple rounds at officers, leading to a five-hour standoff which ended with the man's suicide.

The San Juan County Sheriff's Office, the agency handling the investigation, has released new information on 50-year-old David Valenzuela, the armed man who barricaded himself in the residence, according to a Sheriff's Office press release.

U.S. Marshals Service personnel and deputies were serving a warrant on Valenzuela around 4:30 p.m. at a residence on the 2900 block of Yale Drive for charges from the Ignacio, Colorado Police Department, including aggravated assault and domestic violence.

A door was breached at the residence after officers announcing their presence got no response.

Valenzuela initially fired one round at officers, then two more rounds just before a woman exited the residence.

No shots were fired by law enforcement at the scene throughout the standoff.

People were evacuated from residences along Yale Drive and were escorted by deputies a block away to Edgecliff Drive.

Residents were advised to avoid the area as a safety precaution while patrol vehicles were used to establish a perimeter around the residence.

Police negotiators tried to get Valenzuela to safely exit the residence along with a second woman who was inside. 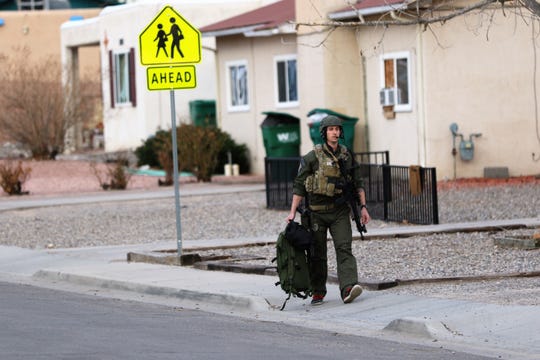 A member of the Farmington Police Department SWAT team walks along the 2900 block of Edgecliff Drive as an armed male suspect barricaded himself in a residence at 2906 Yale Drive Monday in Farmington. (Photo: Joshua Kellogg/The Daily Times)

A decision was made around 8:45 p.m. to attempt to force the occupants out of the residence.

Five cans of gas were fired into the home after multiple warnings were given by officers.

The woman, identified as his girlfriend, exited the residence and Valenzuela appeared in the doorway and was observed with a handgun in his right hand. The press release states he did not point the gun at officers.

Valenzuela then walked into a bathroom and those at the scene heard a noise that sounded like a gunshot. They then lost phone contact with the man.

Valenzuela was found deceased in the residence after a robot was deployed and located the man in a bathtub. His death was confirmed by paramedics at 9:10 p.m.

Area law enforcement used their social media accounts to provide updates to the community, stating around 9:15 p.m. residents were safe to return to their homes as the scene was no longer active.

The two females in the residence with Valenzuela were not charged in the case.