A Farmington man is accused of battering a woman, biting a child and DWI after having a fight with the alleged victim. 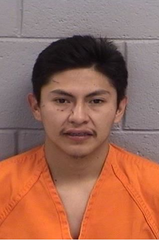 FARMINGTON — A Farmington man is accused of battering a woman, biting a child and DWI after having a fight with the alleged victim.

Rhaemy Charles, 21, is accused of five charges in two cases including one third-degree felony count of aggravated battery, two counts of child abuse along with a fourth-degree felony of criminal damage to property.

He is accused of battering a woman, biting a four-year-old boy and damaging electronics, along with driving the vehicle while intoxicated with two children inside, according to court documents.

Marita Robinson, a contract public defender for Charles, declined comment on the case.

Farmington Police Department officers were dispatched around 9:32 a.m. on March 5 to a residence in the Mesa Trailer Park at 2011 Troy King Road on reports of a vehicle crash.

The alleged victim spoke to an officer after she and two children were transported to San Juan Regional Medical Center by paramedics.

She told the officer Charles had been intoxicated and they had an argument, during which he allegedly pulled her hair.

Charles then allegedly placed the alleged victim in a "choke hold" and she briefly blacked out.

The victim was alleged pushed by Charles, causing her to cut her arm on a nail sticking out of the wall.

After the alleged victim got into the vehicle with the children, Charles allegedly pulled her out of the vehicle by her hair.

She told the officer Charles exited the vehicle with the keys, went inside the residence and he punched her about four to five times in the stomach then went back to the vehicle.

Charles allegedly backed the vehicle into a light pole then tried to leave but a tire popped off the vehicle, according to court documents.

Two maintenance workers ran to the vehicle and checked on the occupants, telling Charles to stay in the vehicle.

While at the hospital, the officer observed a bite on the shoulder of a four-year-old boy.

The alleged victim told the officer Charles broke "their phones, the Xbox and tv" during the alleged incident.

He was incarcerated at the San Juan County Adult Detention Center on a no-bond hold.

His preliminary hearings are set for Wednesday morning in Farmington Magistrate Court.