A Shiprock man is accused of embezzling more than $3,000 from a Farmington auto parts store 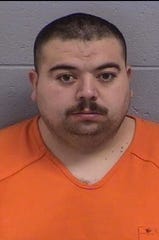 FARMINGTON — A Shiprock man is accused of embezzling more than $3,000 from a Farmington auto parts store where he used to work.

Joshua Martin, 29, is accused of embezzlement, a third-degree felony, according to court records.

He is accused of conducting fraudulent transactions for $3,246 at the O'Reilly Auto Parts store at 2941 E. Main St. in Farmington across a nearly two month period, according to the arrest warrant affidavit.

Nicholas Cullander, Martin's attorney, could not be reached for comment.

A Farmington Police Department officer was dispatched around 8:11 p.m. on Jan. 31 to the auto parts store on reports of a possible embezzlement.

A regional auditor for O'Reilly Auto Parts spoke to the officer.

He told the office he was doing audits when he came across several alleged fraudulent transactions made by Martin, who was an assistant manager.

Returns were being made to the store by customers and the funds were allegedly being sent to Martin's personal credit card, according to court documents.

The auditor stated the transactions were made using Martin's unique ID in the computer system.

The arrest warrant filed in this case states that Martin was confronted by the auditor, who stated Martin returned his key and left the business.

The officer attempted to contact Martin but the phone number provided was disconnected, the document stated.

Martin was booked into the San Juan County Adult Detention Center and released on his own recognizance following a motion filed by Cullander.

Martin's first appearance in Farmington Magistrate Court is set for this morning.