A Shiprock man who has 12 DWI convictions has been accused of his 13th DWI charge after allegedly driving intoxicated in Farmington.

The suspect has 12 DWI convictions across 30 years 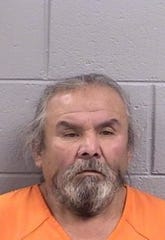 FARMINGTON — A Shiprock man who has 12 DWI convictions has been accused of his 13th DWI charge after allegedly driving intoxicated in Farmington.

Nakai Natoni, 60, is accused of five charges including a second-degree felony count of aggravated DWI (eighth or subsequent offense), according to court records.

Natoni's charges include driving a vehicle while intoxicated along East Main Street and Farmington Avenue while having a revoked driver's license and having an open container of beer, according to the probable cause statement.

Stephen Wayne, Natoni's public defender, could not be reached for comment.

The San Juan County District Attorney's Office filed a motion to hold Natoni without bond pending trial and the motion cited Natoni's 12 DWI convictions, which start in 1990 and go through 2010, according to court documents.

A Farmington police officer observed a vehicle around 6:55 p.m. on Feb. 10 traveling eastbound on Main Street and noted that the driver did not have any lights on.

The vehicle started to travel north on Farmington Avenue and the officer initiated a traffic stop at a shopping plaza.

The officer approached the driver-side of the vehicle and contacted Nakai, who had the strong odor of an alcoholic beverage emitting from the vehicle, according to a Statement of Probable Cause filed in Farmington Magistrate Court .

Nakai initially told the officer he drank three beers then stated he had four to five beers.

During the conversation, the officer observed Nakai was slurring his words.

Nakia told the officer he couldn't see the officer's hand during the sobriety test, even thought it was directly in front of Nakai's face.

He waived his preliminary hearing in Farmington Magistrate Court Wednesday and the case was bound over to District Court.