Card skimmers have been found at a second Farmington gas station recently.

Devices were found attached to pumps on Jan. 26 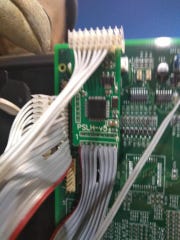 A debit/credit card skimmer was found on two gas pumps at the Sinclair gas station on East Main Street in Farmington on Jan. 26. No customer information was compromised. (Photo: Michael Webb)

FARMINGTON — Devices used to intercept a customer's credit/debit card information have been found at a second Farmington gas station recently, and the owner is citing the work of his employees in preventing that information from ending up in the wrong hands.

The Farmington Police Department is investigating two debit/credit card skimmers found on gas pumps on Jan. 26 at the Sinclair gas station at 2707 E. Main St, according to spokesperson Georgette Allen.

The devices were found by an employee of the Sinclair gas station, according to owner Michael Webb.

The skimmers typically are installed outside or inside a gas pump and are used to make counterfeit cards once the information has been intercepted, according to the National Association of Convenience Stores website.

Three pumps at the Sinclair gas station were broken into, but only two had skimmers installed.

Webb thanked his employees for their diligence and for protecting customers from falling victim to the scammers.

There were only three gas sales conducted between the night of Jan. 25 and the morning of Jan. 26 when the store was closed, Webb said. and the sales occurred on automated gas pumps without the skimmers.

The skimmers found on the Sinclair pumps were mounted on the motherboard of the pump.

"The type of skimmer found mounts directly to the board. That's not normal," Webb said. "This is very sophisticated. This is very new."

Webb said he didn't mind sharing the information about the skimmers found on his gas pumps since his employees are diligent in checking the pumps every morning and because no customer information was compromised.

He added the use of skimmers has increased since customers have started using debit cards more frequently at the gas pump.

Webb goes as far as to urge people to not use their debit cards to pay at a gas pump. He said the safest method for paying at the pump is to get a credit card from the gas station company customers frequent, adding scammers are not interested in fuel cards.

The skimmers found at the unidentified gas station broadcast a signal via Bluetooth for the scammers to collect the card information via a laptop computer or tablet computer, according to The Daily Times archives.

Farmington police Det. Justin Anaya said it is safe for citizens to use their smartphones to check the Bluetooth menu and see if any device is broadcasting using a name full of random letters and numbers.

"We know there is a lot of concern about using cell phones in front of gas pumps because of static electricity," Anaya said.

Anyone with information on the investigation can call nonemergency dispatch at 505-334-6622 or the Farmington Police Department Detective Tip Hotline at 505-599-1068.