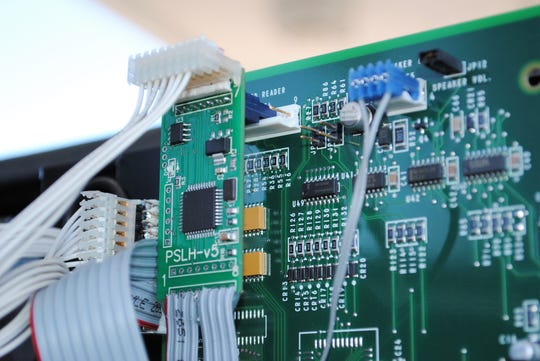 Credit card skimmers were found on two Farmington gas pumps Saturday that had been installed between the credit card reader and the motherboard that operates the pump. (Photo: The Farmington Police Department)

FARMINGTON — The Farmington Police Department is warning citizens about two credit card skimmers found at a Farmington gas station and providing tips on how to avoid becoming a victim of the scam.

An investigation was launched Saturday after the skimmers were found on two gas pumps at the station, according to a Farmington police press release.

Station employees were conducting a check on the pumps when they noticed the doors on two pumps wouldn't fasten correctly and pry marks were found on the door to access the pump's motherboard, according to Detective Justin Anaya.

"Once the actual operator who deals with the pumps itself looked further into it, they discovered the skimmers," Anaya said.

A skimmer is a device installed inside or outside a gas pump to steal a customer's debit/credit card information to make counterfeit cards, according to the National Association of Convenience Stores website.

Farmington police have declined to identify the gas station where the skimmers were found because the owner asked police to not release the name for fear of losing business, according to Anaya.

Investigators reviewed all the credit card transactions for the business, and no customers was affected by the skimmers because no transaction activity occurred on the affected pumps on Friday night/early Saturday morning, Anaya said.

It is the second case involving credit card skimmers Farmington police have investigated in the last year and a half, according to Anaya.

Anaya said credit card skimmers have become more sophisticated in response to debit/credit cards having microchips installed on them.

In the most recent case, the skimmers were found installed between the card reader mounted on the gas pump and the motherboard inside the pump, Anaya said.

The skimmer received power from the gas pump and transmitted its signal via Bluetooth. Anaya said the skimmer wirelessly transferred the credit/debit card information it collected to a nearby laptop or tablet computer.

Farmington police are advising drivers who use a debit or credit card to pay for their gas to use their smartphone and check the Bluetooth menu to see if any device is broadcasting using a name that is full of random numbers and letters mixed up together, according to Anaya.

One device found by investigators was broadcasting using the name of "FCD_1608."

Anaya advised citizens it is safe for them to use their smartphone near a gas pump, and the use of the phone near the pump will not ignite the gasoline fumes. 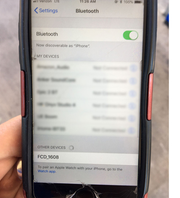 Citizens concerned about using a credit/debit card to pay at a gas pump also are urged to look for any signs of forced entry and damage to the pump. Some gas pumps have security seals placed on panels of the pumps, and the seal will read "Void" if the panel is opened or if the seal is cut, according to the Federal Trade Commission website.

Farmington police urge anyone who believes they were scammed by a credit card skimmer to contact police and their financial institution.

Anyone with information on the investigation can call the Farmington Police Department Detective Tip Hotline at 505-599-1068 or nonemergency dispatch at 505-334-6622.