A San Juan County man is accused of six felony charges for multiple alleged incidents of molesting and groping a young female relative. 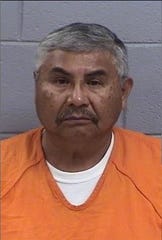 He is accused of two incidents of molesting and four incidents of groping a young female relative, according to the arrest warrant affidavit.

Adam Bell, Herrera's attorney, could not be reached for comment today.

The investigation was launched on Jan. 17 after a detective for the San Juan County Sheriff's Office received a report from New Mexico Children, Youth, and Families Department. The report was about a girl who had told friends at her school about alleged sexual abuse involving a relative, according to court documents.

The alleged victim stopped one of the alleged incidents with Herrera by getting the attention of another relative in the same room, according to court documents.

On Jan. 29, an interview was conducted with Herrera at the Sheriff's Office. He did not talk to the detective about the allegations from the victim, remaining silent during significant portions of the interview, according to court documents.

He allegedly only spoke twice, stating, "It didn't happen" and "I gotta go" before he walked out of the interview.

Herrera was released on his own recognizance following his first appearance Monday in Aztec Magistrate Court and was ordered to wear a GPS ankle monitor, according to court records.

His preliminary hearing was set for the morning of Feb. 14 in Aztec Magistrate Court.