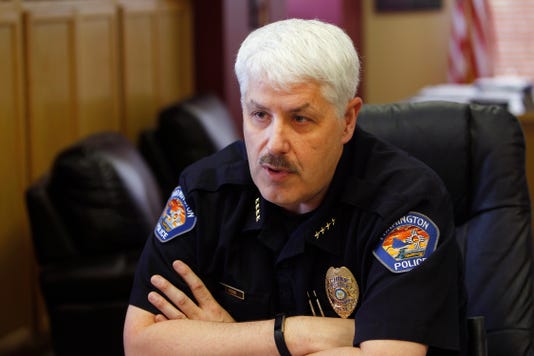 Farmington Police Chief Steve Hebbe says he is pleased with the results of recent study that appears to show that aggressive outreach by the department's victim advocates results in a higher conviction rate for violent offenders.(Photo: The Daily Times archives)Buy Photo

It was Farmington police Chief Steve Hebbe who approached Sarah Tracy, a visiting professor in the psychology department of the school's Farmington branch, to assess how the program is functioning.

Tracy responded positively when Hebbe reached out to her for help in collecting the data, running the statistics and determining how effective the program is.

The program has two advocates who support victims of violent crimes, focusing on sexual assault and domestic violence, according to Hebbe.

"The basic thing they are supposed to do is work with the victims to allow them to track the cases that go through the courts, so they know what is going on," Hebbe said. "They wind up doing so much more."

In addition to helping victims track their case through court, the advocates end up tackling social work by helping victims connect with agencies designed to help them with issues including finances, housing or child custody.

Tracy was able to access the Farmington Police Department's Law Enforcement Records Management System and search the database for domestic violence cases. She was searching for how much contact advocates had with victims and studying the nature of that contact.

Tracy started by examining if an advocate sent a letter to a victim, then determining if the advocate had phone contact or face-to-face contact with a victim.

“I think it's important to note that the difference in conviction rates between just a letter versus face-to-face contact was statistically significant.”

Her informal results show that the conviction rate in cases when only a letter was sent was 26 percent. The rate when phone contact was made went up to 46 percent, and it increased to 50 percent when face-to-face contact was made, according to Tracy.

"I think it's important to note that the difference in conviction rates between just a letter versus face-to-face contact was statistically significant," Tracy said.

Hebbe said he was very pleased with the results.

"It wasn't totally unexpected for me, but I was pleased with what we saw,'" Hebbe said.

Most law enforcement agencies do not have victim advocates on staff, as those agencies tend to focus on the suspect and prosecuting the criminal case, according to Hebbe.

The Farmington Police Department has had a victim advocate on staff for nearly 15 years, a job that started as a grant-funded position.

"In the overall picture, this is one of the most important things we do for victims in crimes," Hebbe said. "Much more so than making an arrest at night and processing the paperwork in court."

The information Tracy gathered for her report will help department officials determine if they should hire a third court advocate or if the department already has enough advocates.

Hebbe said the program also empowers violence victims to keep control of their lives by helping them seek counseling if they wish with the perpetrator so they can live a better life together or break free and help seek a different life without the perpetrator, Hebbe said.