New charges have been filed against Ryan Westman, the suspect shot once by authorities at a Farmington gas station.

A New Mexico State Police vehicle rammed the front of a suspect's vehicle until it came to stop north of the intersection of U.S. Highway 64 and County Road 350 after an extended chase on Thursday.(Photo: Courtesy of the San Juan County Sheriff's Office)

FARMINGTON — A new set of charges has been filed against a man who was shot last week in San Juan County by law enforcement officials after an extended chase that covered much of northwest New Mexico.

Westman was shot once in the right arm Thursday evening at the Valero gas station at 4913 E. Main St. in Farmington after leading authorities on a vehicle pursuit earlier in the day, according to the arrest warrant affidavit.

Langley is on paid administrative leave, according to Detective Lt. Kyle Lincoln of the San Juan County Sheriff's Office.

The sheriff's office charges stem from the events that allegedly transpired when authorities attempted to take Westman into custody around 7 p.m. Thursday at the Farmington gas station.

A Hispanic male exited Westman's vehicle to pay for gas and started to pump fuel into the vehicle, according to court documents.

The agent was struck by the front-passenger side of Westman's vehicle, and Langley responded by firing his rifle into the vehicle. 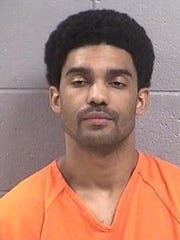 Lincoln said the sheriff's office is still investigating the number of shots fired by Langley.

Westman allegedly fled the scene in the vehicle and later was taken into custody north of the intersection of County Road 350 and U.S. Highway 64 after a New Mexico State Police vehicle rammed Westman's vehicle onto the shoulder of the road.

Westman was transported to the San Juan Regional Medical Center for treatment. He was released and booked into the San Juan County Adult Detention Center early Friday.

Lincoln identified the Hispanic male accompanying Westman as Robert Baca, who was arrested at the gas station for alleged possession of a controlled substance after being accused of having heroin and syringes.

Several agencies, including the San Juan County and McKinley County sheriff's offices, New Mexico State Police, the Farmington Police Department and the Shiprock Police Department, were involved in the pursuit of Westman from an area north of Gallup to Farmington.

Sgt. Robert Turney of the McKinley County Sheriff's Office said Westman is involved in a murder investigation after the victim of an alleged battery, 57-year-old Mitchell Chavez, died in a Flagstaff, Arizona, hospital on Sunday.

Turney believes homicide charges could be filed against Westman later this week.

Westman is accused of striking Chavez multiple times in the head with a blunt object, according to Turney. Chavez was flown to a hospital in Flagstaff for treatment.

It was around 11:30 a.m. Sunday when Chavez was taken off life support and was pronounced dead, Turney said.

As part of the investigation, deputies for the McKinley County Sheriff's Office on Thursday were given a possible location for Westman in an unincorporated portion of McKinley County known as Gamerco.

A deputy made visual contact with the suspect in the area and observed Westman get into a white passenger car and flee the scene around 10 a.m., according to Turney. He led officers from Gamerco to Shiprock to Farmington, where authorities lost him.

Authorities were able to locate Westman later on Thursday by pinging his cellphone, which returned a possible location in the area of English Road and East Main Street in Farmington.

“It's amazing no one else was hurt”

He is accused of trying to strike a McKinley County sheriff's deputy and two officers for the Shiprock Police Department with his vehicle as they tried to deploy spike strips along U.S. Highway 64 and U.S. Highway 491, according to Turney.

"It's amazing no one else was hurt," Turney said.

Turney wanted to express his gratitude for all the agencies involved in the arrest of Westman and said their response illustrates how committed they are to the safety of their community.

Westman was incarcerated at the county jail this afternoon on a no-bond hold.