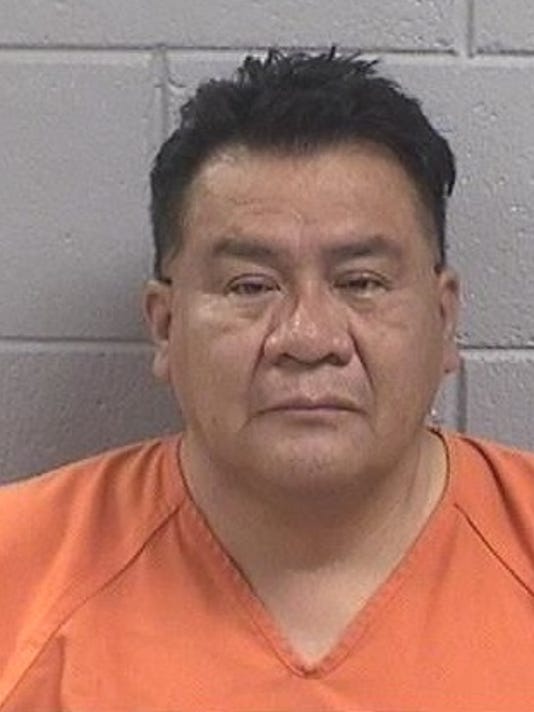 FARMINGTON — The director of the Navajo School Clothing Program has pleaded guilty to an outstanding warrant for a driving while intoxicated conviction as the Navajo Nation education department files paperwork to have him removed from his board seat for a tribally controlled school in Arizona.

Chrispin Wallace, 49, was arrested on June 9 by Farmington police officers at the Courtyard by Marriot hotel for failing to comply with his probation related to a 2011 DWI conviction.

A warrant was issued on March 15, 2011, in Farmington Municipal Court for his arrest for failing to report to the San Juan County Adult Detention Center on Feb. 21, 2011.

That was part of a plea agreement on a Dec. 17, 2009, DWI arrest, according to court documents and records.

Wallace initially pleaded not guilty on June 14 during a hearing in Farmington Municipal Court, according to court documents.

He was ordered to be held without bond at the San Juan County Adult Detention Center with a pretrial conference scheduled for July 6.

Wallacee changed his plea to guilty on June 16 and waived his right to counsel.

The court documents state he was found in contempt of court and sentenced to serve 90 days in jail.

If Wallace completes the program, the remaining jail time will be suspended, and he will be on supervised release, according to the court documents.

Terrelene Massey, executive director of the Navajo Division of Social Services, declined comment, stating it was a personnel issue.

The Navajo School Clothing Program operates under the Navajo Division of Social Services and provides clothing for Navajo children enrolled in school and those experiencing a crisis.

Matthew Tso, legislative analyst for the Department of Diné Education, said the department filed a complaint with the Navajo Election Administration on June 16 to remove Wallace from his Nazlini school board seat and prohibit him from holding any other elected Navajo Nation office for eight years.

The Navajo Nation Election Code has a lifetime ban for school board members convicted of "any crimes involving the use of intoxicating alcohol," according to a copy of the complaint.

Wallace's complaint follows the recent removal of three tribal grant school board members in May for failing to list alcohol-related convictions on candidate applications, Tso said.

One member resigned and two members were removed from the Shiprock Associated Schools Inc. Board of Education for not disclosing DWI convictions on their election paperwork.