A Farmington man accused of battery charges for allegedly attacking a man based on his sexual orientation has agreed to plead guilty.

FARMINGTON — A man charged with two counts of battery has agreed to plead guilty to one of the charges as part of a plea agreement.

Jonathan Reed, 34, agreed to plead guilty to a charge of aggravated battery causing great bodily harm, a third-degree felony, as part of a plea agreement filed in district court on Monday, according to court documents.

Reed was charged on Aug. 1 in Farmington Magistrate Court with felony and misdemeanor aggravated battery counts, according to court records.

In the plea agreement, the misdemeanor battery charge will be dismissed.

Reed was accused of attacking Josh Valdez and Christina Martinez at a birthday party early on Aug. 1 at a residence on North Carlton Avenue in Farmington, according to The Daily Times archives.

Valdez, who is gay, told police Reed yelled hateful slurs at him before punching Valdez in the face, according to court documents.

Reed then allegedly pinned Valdez to the ground and repeatedly struck him, according to court documents.

Martinez was treated for "serious brain injury" and brain bleed after intervening and trying to stop the fight, according to court documents.

Valdez said he suffered a concussion and a broken nose. Valdez told The Daily Times he was attacked because he is gay.

The felony battery charge was filed against Reed for the attack on Martinez, San Juan County Chief Deputy District Attorney Dustin O'Brien said. O'Brien said Martinez suffered a broken bone around one of her eyes. 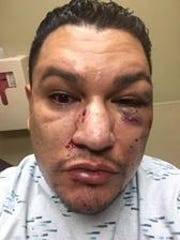 Josh Valdez posted photos of his injuries on Facebook after he allegedly was attacked at a birthday party early on July 31 at a residence on North Carlton Avenue in Farmington, according to an arrest warrant affidavit. Valdez says he was attacked because he is gay. (Photo: Courtesy of Josh Valdez)

The DA's Office and Reed's defense attorney both said they had concerns about the evidence in the case.

Hatfield said there are different accounts of the incident from witnesses for the defense and prosecution. He described the agreement as a "good result" of negotiating between both sides.

Reed's previous felony convictions will play a role in his sentencing.

The 2003 conviction will require Reed to serve a one-year sentence for violating the conditions of his release, according to O'Brien.

Reed could serve a sentence of one to four years, according to O'Brien.

The aggravated battery felony count carries a sentence of one to three years followed by two years of parole.

The DA's Office did not oppose a suspended sentence for Reed for the time not covered by the one-year required sentence, the agreement states.

Hatfield said the agreement is not binding, and Judge Karen Townsend's ruling during a June 19 hearing could differ.