Two teen brothers were arrested on allegations they damaged and burgled the Bloomfield Multicultural Center. 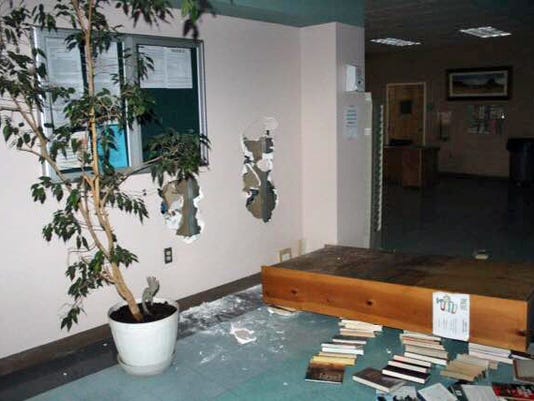 Two teenagers have been arrested on suspicion of vandalizing the Bloomfield Multicultural Center. Officials found the damage on Wednesday. The teens are accused of smashing walls, spraying fire extinguishers and knocking over bookshelves.(Photo: Courtesy of city of Bloomfield)

FARMINGTON — Two teens were arrested Wednesday on suspicion they damaged and burgled the Bloomfield Multicultural Center, causing tens of thousands of dollars in damage.

Bloomfield police were dispatched at 5 a.m. Wednesday to the multicultural center on South 1st Street after receiving reports of the incident.

Police Chief Randy Foster said today officers discovered vandals had broken in and caused damage. Windows were broken, drywall had been smashed, book shelves were kicked down and graffiti was scribbled on the walls.

Foster said the vandals smashed through drywall to move between rooms at the multicultural center. Fire extinguishers were sprayed throughout the building.

The vandals also stole about $100 from a cash register, according to Foster.

Foster said police found footprints at the scene and were able to identify two local brothers, ages 14 and 15, as suspects after canvassing the neighborhood. He said police obtained confessions and matched the footprints to the brother's shoes.

Vandals did an estimated $30,000 to $50,000 in damage to the Bloomfield Multicultural Center Wednesday. (Photo: Courtesy of city of Bloomfield)

"It was an awesome team effort by the department to put it together," Foster said.

Foster said the city's insurers toured the center today to determine the cost of the damage. He estimated the boys did between $30,000 and $50,000 in damage.

Foster said there have not been recent reports of other incidents of vandalism in Bloomfield.