Brandon Lee is set to appear at trial today in the violent kidnapping of a 30-year-old woman in December 2014. 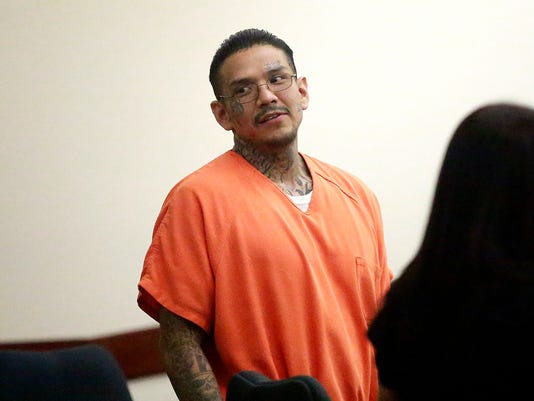 AZTEC — Brandon Lee is expected to appear at trial Thursday on charges of kidnapping and aggravated battery after the last-minute collapse of a plea deal.

Lee, 29, of Kirtland, is charged with kidnapping, aggravated battery with a deadly weapon and assault, among lesser offenses, on allegations he kidnapped 30-year-old Crystal Begaye from her home on Dec. 22, 2014, and demanded she pay him for unpaid debts, according to The Daily Times archives.

Lee allegedly beat Begaye with a pair of brass knuckles and drove her to an ATM to get him money, archives state. Begaye eventually jumped out of Lee's vehicle and was crushed by its wheels, but she managed to escape, according to archives.

Lee was arrested Dec. 27, 2014, after a week-long manhunt. Police allege Lee jumped from the second-story balcony of a motel in an attempt to avoid arrest, but he was caught after a short foot pursuit.

Lee was expected to enter a plea today to resolve the charges, but the state withdrew the plea offer after Begaye appeared at the hearing and told Judge Karen Townsend she did not approve of it.

Prosecutor John Beckstead told the judge his office made the plea offer because they feared Begaye would not appear at trial.

Begaye admitted she missed a meeting with the state, but said it was due to "fear."

"I have anxiety," she told the judge. "I have a lot on my mind. I'm afraid about how this will go down. But I'm here right now. I'm speaking to you."

Lee's defense attorney, Brad Kerwin, argued the plea deal was a signed contract, but the judge rejected it.

Attorneys agreed the trial likely will be completed by Thursday afternoon.