Prosecutors have dismissed murder charges against Cody Soto, who was arrested in 2013 in the slaying of Brandy Robinson.

FARMINGTON — The state has dismissed murder charges against Cody Soto, who was arrested nearly three years ago in the slaying of 29-year-old Brandy Robinson.

Chief Deputy District Attorney Dustin O'Brien said Tuesday a gag order prevented him from discussing the state's decision to dismiss the case, but he said murder charges may be refiled in the future.

Current said detectives still believe Soto is responsible for the death of Robinson, the 27-year-old's ex-girlfriend, whose nude body was found on June 22, 2013, dumped near a service road off the Bisti Highway in San Juan County. Robinson was stabbed almost two dozen times, including fatal wounds to the back and left breast.

During a two-week trial in January, the state pinned its case against Soto on an alleged confession he offered during questioning by detectives in July 2013.

"This case is about the confession," Cowen told the jury in closing statements. 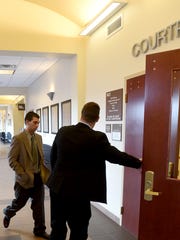 Defense attorneys Christian Hatfield and Liane Kerr attacked the criminal investigation and said the confession was coerced. After several hours of deliberation, a jury failed to reach a verdict on Feb. 1 and Judge John Dean declared a mistrial.

Kerr said Tuesday she and Hatfield fought hard because they believe in Soto's innocence.

"We had a trial, we had a mistrial, we filed a bazillion motions through the process, and I think that is how we get to justice," she said.

She said she had theories regarding who was responsible for Robinson's murder, "but I will leave that up to San Juan County law enforcement."

Earlier this month the state dismissed charges against Levi Wilson, another high-profile defendant accused of attempted murder in a shootout in Farmington in July 2013 that left a neighbor, 40-year-old Christopher Valdez, dead.

O'Brien said the decision to dismiss the men's cases were not related.

In the Wilson case, prosecutors faced the difficult task of definitively proving who fired the bullet that killed Valdez. O'Brien said both Soto and Wilson's cases were hampered by witnesses who lacked credibility.

Soto is scheduled to go to trial on charges of drug trafficking, false imprisonment and battery against a household member on Aug. 16.