Farmington police officers are being trained in crisis intervention to better deal with individuals with mental illness. 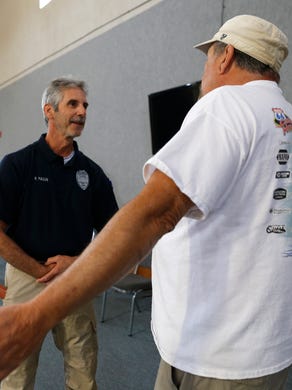 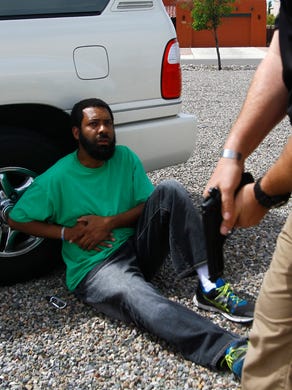 Public Safety Psychology Group role-playing actor Troy Taylor talks with Farmington Police Department Officer Justin Ahlgrim during a training session on Friday at the Fraternal Order of the Police headquarters in Farmington. Taylor was playing the role of a man who was stabbed during an altercation with an individual with mental health problems. Jon Austria/The Daily Times
Fullscreen 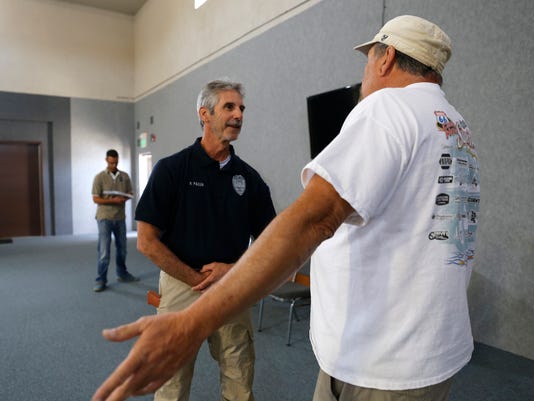 FARMINGTON — Gerard Bartlett paced the floor Friday morning at the Fraternal Order of Police headquarters armed with a clipboard. Two Farmington police officers were armed with guns, which they pointed at a knife-wielding woman backed up to a wall.

Officer Lisa Haws asked the woman to drop the knife.

"I told you he didn't do anything, and you didn't listen to me," the woman, whose husband sat nearby in handcuffs, yelled at the officer.

"As far as today goes, is there any way we can get you to drop that knife?" Haws

Officer Carlos Martinez explained to the woman that her husband was handcuffed because he was being uncooperative and aggressive. But he had only been detained.

"It didn't have anything to do with you, ma'am," Martinez said. "We are just trying to figure out what is going on. Now, do you understand that?"

The woman said she understood. A few moments later, she dropped the knife, and about two dozen officers in the room applauded.

The weapons weren't real, but the situation was all too familiar, according to Martinez.

"Every day I come in contact with an intoxicated subject on the street," he said in an interview. "Domestic violence scenarios. Suicidal subjects."

Public Safety Psychology Group role-playing actor Troy Taylor talks with Farmington Police Department Officer Justin Ahlgrim during a training session on Friday at the Fraternal Order of the Police headquarters in Farmington. Taylor was playing the role of a man who was stabbed during an altercation with an individual with mental health problems. (Photo: Jon Austria/The Daily Times)

The officers were participating in a week-long training course designed to teach crisis intervention, a nonviolent police tactic that emphasizes techniques to deal with the mentally ill or people in crisis.

Bartlett, a licensed mental health counselor, dissected the scenario with Haws and Martinez after it was completed. He commended both officers for how they handled the situation and told Martinez he had a disarming voice.

"Even as we talk right now, I feel like I am being listened to," Bartlett said.

Chief Steve Hebbe said the training was intended to help the officers develop tools, such as body language awareness and verbal de-escalation, that may help them avoid the use of force.

"It's a major strain on the department to have so much training going on at one time," Hebbe said. "But this one is worth it."

He said the training is part of a larger collaborative effort to help individuals experiencing a mental health crisis.

"We are in the beginning phases of forming collaborative teams with other mental health professionals in San Juan County," he said. "More proactive outreach and collaboration — that is where we will be six months from now." 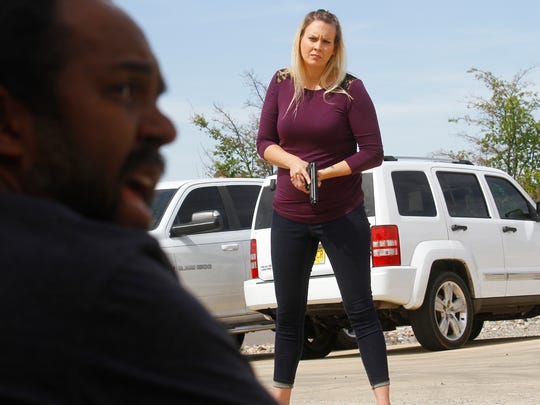 Police psychologist Troy Rodgers owns the Public Safety Psychology Group, the Albuquerque-based business that is providing the training. He said crisis intervention training was created in the middle 1990s in response to a national mental health crisis that began in the 1970s, when many mental health facilities were shuttered as part of a national trend toward deinstitutionalization.

Many of the patients released during that period ended up on the streets, according to Rodgers, where they regularly came into contact with law enforcement officers who were not trained to recognize a mental crisis and intervene.

Though the crisis intervention training was created 20 years ago, Rodgers said it has gained prominence as a police tactic in the past five years, with his business recently training the Albuquerque Police Department, New Mexico State Police and the Bernalillo County Sheriff's Office.

"There isn't a textbook for talking to people," Rodgers said. "We can say it's a science, but it's an artful science."

Haws said crisis intervention wasn't taught when she attended the law enforcement academy in 1999, but she said this week of training had been invaluable.

"Being able to safely gain compliance? It's safer for everybody," she said.