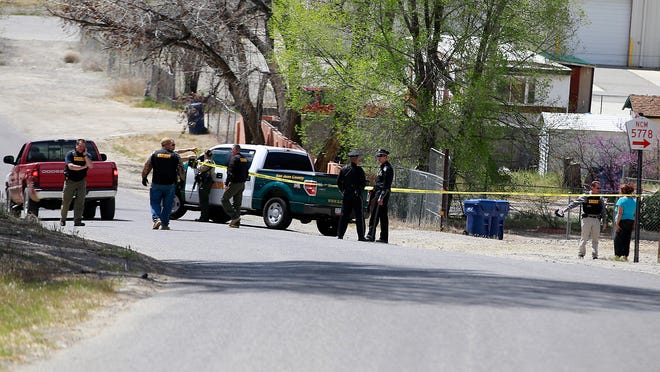 FARMINGTON — Police this evening continued searching for a 22-year-old suspect in a nonfatal shooting in the Wild Horse Valley subdivision between Bloomfield and Farmington.

Police were looking for Randy Armenta, a Bloomfield man wanted on a bench warrant for allegedly violating probation in a credit card theft case, according to court records.

Deputies from the San Juan County Sheriff's Office and New Mexico State Police were dispatched at 11:13 a.m. today to County Road 5777 after receiving reports of a shooting.

Sheriff's Office detective Lt. Kyle Lincoln said deputies learned at the scene that 28-year-old Edgar Lopez was shot after a dispute outside a home at No. 7 County Road 5777.

Lopez was transported by the home's owner to San Juan Regional Medical Center and treated for a gunshot wound to the leg. Lincoln said this evening that Lopez had been released from the hospital.

Lincoln said Lopez and Armenta met outside the residence on County Road 5777 to exchange tires and rims. Armenta allegedly shot Lopez and then fled the scene in a blue passenger car, Lincoln said.

A black vehicle was also spotted fleeing the scene of the shooting, according to Lincoln. Police have not determined if it was connected to the incident.

County Road 5777 was briefly closed this morning due to the shooting.