Farmington police officials say they expect to close out the year with a modest increase in drunken driving arrests. 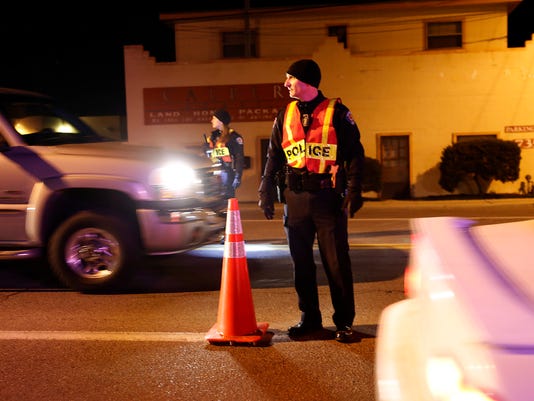 FARMINGTON — Farmington police officials say they expect to close out the year with a modest increase in drunken driving arrests.

The department made 653 DWI arrests in 2011, the highest annual arrest rate in the past five years.

Farmington police Chief Steve Hebbe said the Report Aggressive and Drunken Drivers, or RADD, program continues to be a success for the department.

An average of 331 citizens call 911 each month to report suspected drunken drivers, according to department statistics. On average, 6 percent of those calls have resulted in a drunken driving arrest, the statistics indicate.

Almost 40 percent of the department's total DWI arrests this year were made as a result of citizen calls to 911, according to the statistics.

Although patrol Sgt. David Karst said last year that he expected the department to exceed 1,000 DWI arrests this year, that goal likely will not be met.

Hebbe said that may be a result of the department's publicity campaign, which targeted a reduction in drunken driving.

"We hope some of it is the publicity," Hebbe said. "We have been talking about it a lot."

Hebbe said that three traffic officers in the department's DWI Unit also spent portions of the year receiving training to become drug recognition experts, which meant they were not out on patrol making arrests.

Tracy said there has also been no substantial change in the number of alcohol-related crashes in 2015.

Hebbe said it is difficult to say how many arrests the department will make next year, but he expects another increase.