What to know about the upcoming Navajo Dam water release

The water release from Navajo Dam will be different this year than previous years.

What to know about the upcoming Navajo Dam water release 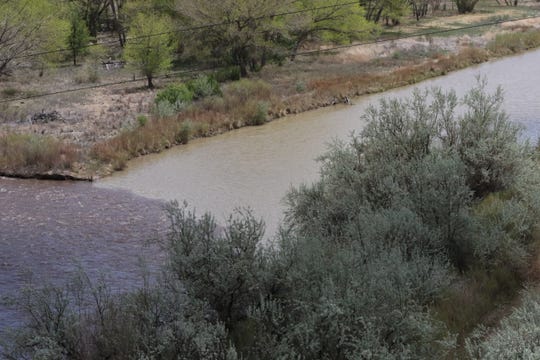 BLOOMFIELD — The U.S. Bureau of Reclamation, which oversees the operations of Navajo Dam, will release 5,000 cubic feet of water per second for five days this year.

This year's release will be a bit different than releases the Bureau of Reclamation has done in the past.

The release will not last as long as in past years. In 2017, the Bureau of Reclamation released had a month-long release of 5,000 cubic feet per second. In 2016, the release began in May and ramped down in July.

There was not a spring peak release in 2018, but the bureau did release water over the summer to balance the low flows from the Animas River and maintain at least 500 cubic feet per second in the San Juan River between Farmington and Lake Powell.

Flooding is possible during the release

Behery said property owners along the San Juan River could notice some flooding. She said valuable items should be removed from the river banks.

Behery said this flooding is possible during releases from Navajo Dam or when tributaries like Largo Wash are running.

Shawn Williams, district manager for the Office of the State Engineer, said property owners should not try to stabilize the banks on their own. Instead, he said the U.S. Army Corps of Engineers can assist property owners.

The water release is intended to clear out sediment, debris

The Bureau of Reclamation has been releasing large amounts of water for several weeks on a yearly basis since 2006. In 2006, a record of decision was issued for the Navajo Unit that detailed requirements to mitigate the impacts of the dam on endangered species. When there is enough water, the bureau makes large releases in the spring or early summer to mimic the natural spring runoff from snowmelt in the Colorado mountains.

Canada geese stand in the shallows, Wednesday, May 1, 2019, at the confluence of the Animas and San Juan rivers in Farmington. (Photo: Hannah Grover/The Daily Times)

She said the Bureau of Reclamation wants to keep the channel capacity at 5,000 cubic feet per second.

The release will likely happen in late May or early June

Behery said the release will be timed based on when the Animas River peaks. She anticipates that will be in late May or early June. Notice will be posted online 10 days before the release on the project's page on usbr.gov.

Thom Chacon, a guide with Duranglers, rows a boat out into the San Juan River, Thursday, April 18, 2019, at Texas Hole below Navajo Dam. The dam will begin releasing water for a period, eventually reaching 5,000 cubic feet per second for five days. (Photo: Hannah Grover/The Daily Times)

After five days of releasing 5,000 cubic feet per second, Behery said the bureau will decrease the flow over three days.

She said the San Juan River will likely be flowing at 10,000 cubic feet per second below the confluence with the Animas River during the channel maintenance release.

Bureau of Reclamation is trying to rebuild reserves

In a normal year, the Bureau of Reclamation would release 300,000 acre feet of water during the spring peak release. However, this year’s release will only be 70,000 acre feet.

The smaller release is intended to clear out the channel without losing too much water from the lake. Behery said the release will likely reduce lake levels by five to six feet.

While the Bureau of Reclamation is trying to rebuild reservoir’s water storage following the 2018 drought, Behery said the bureau did not want to put off doing a release altogether.

The Bureau of Reclamation did not do spring peak releases from Navajo Dam in 2013, 2014 or 2015 due to drought conditions. Sediment and vegetation began to encroach on the river banks. This caused problems in 2016 during the spring peak release. A trailer nearly washed into the river, and the Bureau of Reclamation was only able to release up to 4,500 cubic feet of water per second rather than the full 5,000 cubic feet per second.

She said it has cleared up enough that the City of Farmington is able to operate the hydroplant at Navajo Dam, but it is still impacting water quality below the dam

Behery said the cloudy, or turbid, water was likely caused by the low water levels in the lake when runoff began entering the reservoir from two rivers.

“It’s just natural runoff from the Pine and Piedra that normally would have settled out,” Behery said.

She said the low levels in the reservoir likely caused the turbid water to back up behind the dam.

“We don’t really know when it’s going to clear up,” Behery said.