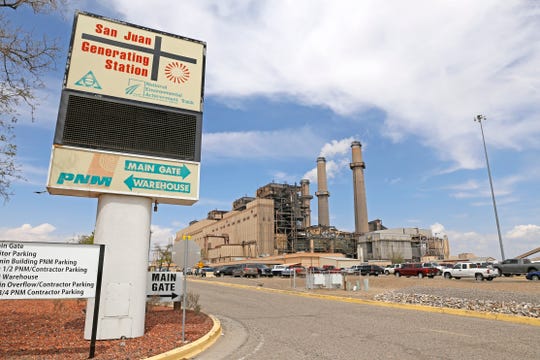 The future of the San Juan Generating Station and the feasibility and uses of carbon capture technology were discussed during a recent energy conference at San Juan College. (Photo: The Daily Times file photo)

A New Mexico Tech researcher said capturing carbon emissions could help both the oil field and the environment.

Energy, Minerals and Natural Resources Department Cabinet Secretary Sarah Cottrell Propst discussed the Energy Transition Act and the state's concerns about whether installing carbon capture technology will be a feasible option at the generating station.

Robert Balch, the director of the Petroleum Recovery Research Center at New Mexico Institute of Mining and Technology, said about two thirds of the oil in the world is stranded, meaning it cannot be accessed using traditional extraction methods.

This oil could be recovered through a process called enhanced oil recovery. That means injecting carbon dioxide into the ground to produce more oil.

Balch told an audience at the San Juan Basin Energy Conference on Friday that carbon dioxide has been used to increase oil production since 1972.

Balch is studying accidental storage of carbon dioxide during enhanced oil recovery. When this carbon dioxide is injected into the ground, some of it remains trapped in the pores of rocks.

He said capturing carbon emissions is necessary to meet the goals set forth by the Paris Climate Agreement.

A state official discussed a feasibility study currently underway to determine if emissions could be captured from the San Juan Generating Station and used in enhanced oil recovery in the Permian basin.

This would require a variance to new emission requirements while the technology is installed.

An audience member asked Cottrell Propst about  the plans for carbon capture at San Juan Generating Station. She said the state learned of plans to install the technology on the power plant late in the legislative session.

"We thought that that was very interesting," she said about the proposal.

Cottrell Propst said there were concerns with the project. She highlighted that there are only two coal-fired commercial power plants that use carbon capture technology and both plants are configured differently than the San Juan Generating Station.

She said the City of Farmington or the investor Enchant Energy could apply for a variance that would give them a few years to install the technology. This would allow the power plant to meet emissions requirements and remain open.

"If they get to the point where the finances on this project look real, the technology looks real and they can prove it, then I think they would have a lot of support even from some of the environmental groups," Cottrell Propst said.

Cottrell Propst spoke about the Energy Transition Act as well as climate change initiatives the state is embracing.

These initiatives include developing regulations to address methane emissions from the oil and natural gas sectors. She said those regulations are still being developed and industry officials will be consulted in the process.

These bonds will be used to pay expenses related to closing the San Juan Generating Station, including investments into the power plant that have not yet been recuperated from customers. The Public Regulation Commission will ultimately decide if PNM can pursue these bonds, but the act provides guidelines for that process.

“The Energy Transition Act is not in and of itself forcing the closure of the San Juan Generating Station,” she said.