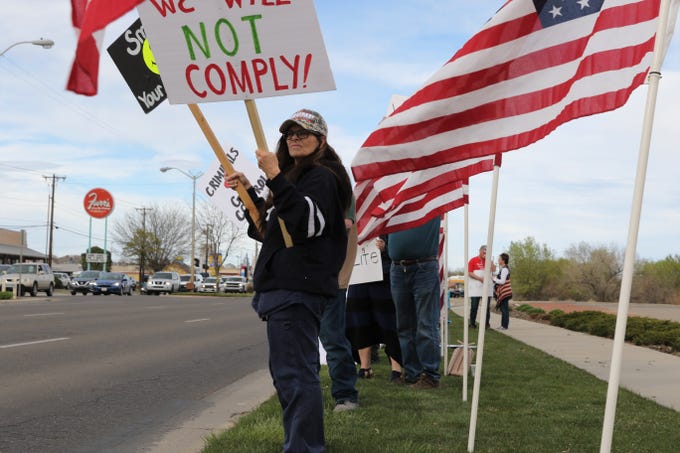 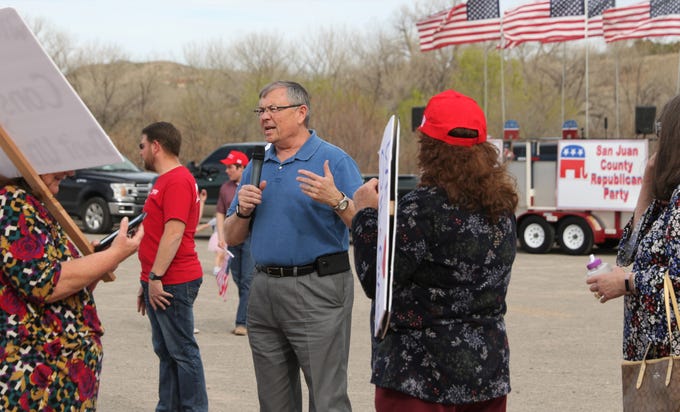 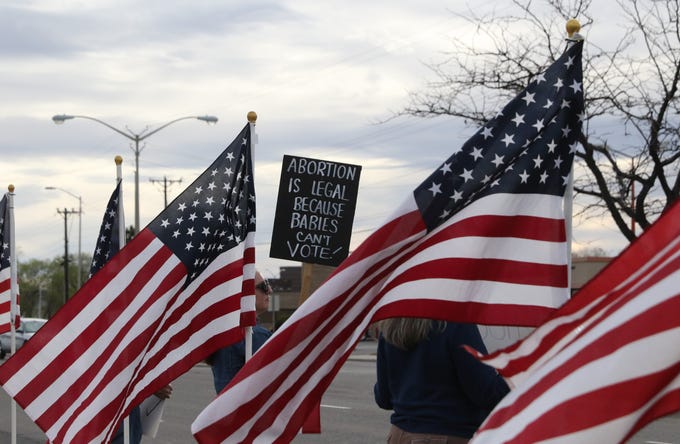 Abortion was among the topics that drew protesters to the Tax Day Rally Monday, April 15, 2019, in front of the Farmington Museum. Hannah Grover/The Daily Times

Abortion was among the topics that drew protesters to the Tax Day Rally Monday, April 15, 2019, in front of the Farmington Museum. Hannah Grover/The Daily Times 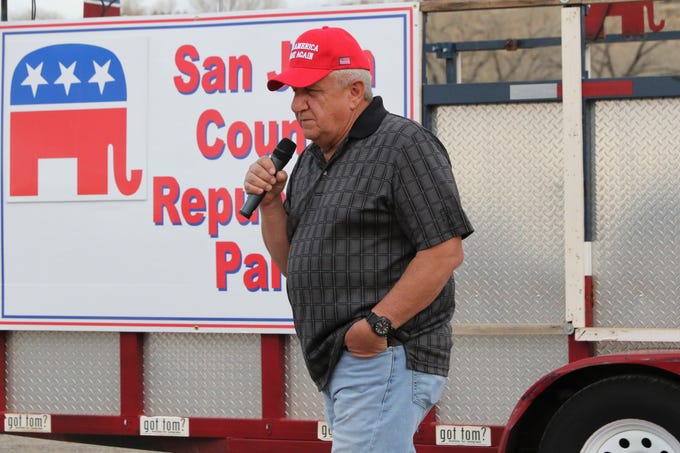 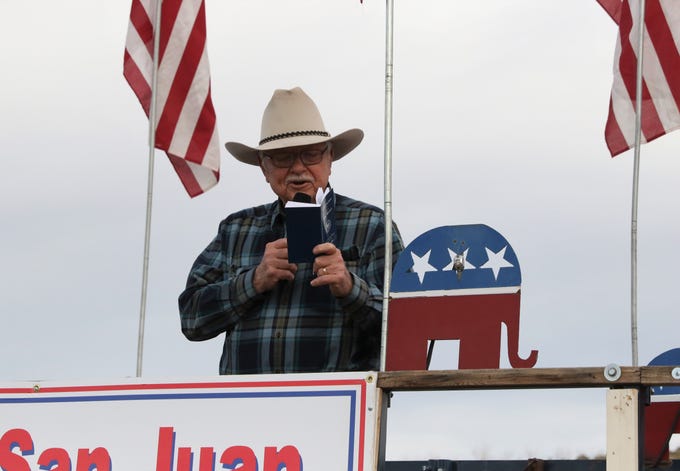 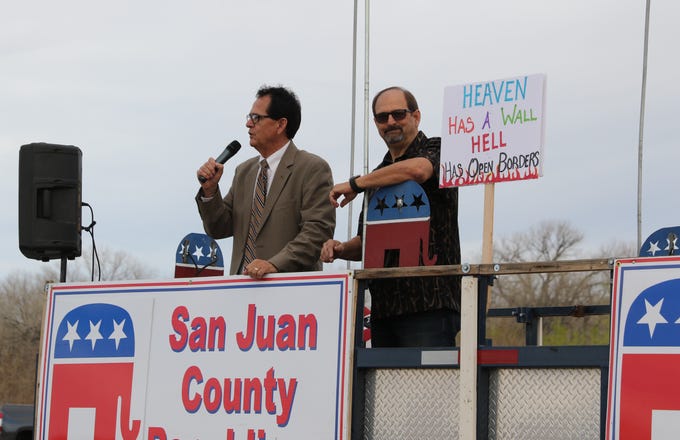 FARMINGTON — The Republican Party of San Juan County marked Tax Day with a rally at Farmington Museum at Gateway Park. While that rally coincided with the filing deadline for taxes, the speakers addressed a wide range of topics, from abortion to jobs.

“We need to hold all the candidates, all the elected officials, accountable for what they are promising us,” Degner said.

Brenda McGaha held a sign reading “Coal feeds my family” while standing on the sidewalk beside Main Street during the Tax Day Rally.

“We don’t want to see the coal mines shut down,” she said. 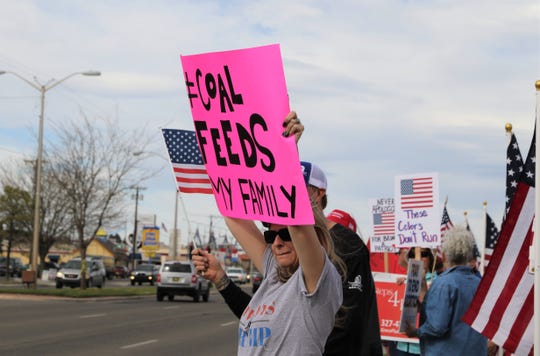 After Public Service Company of New Mexico announced plans in 2017 to close the San Juan Generating Station, local leaders began searching for ways to save the jobs at the power plant and mine.

A few months ago, Farmington announced it had found a buyer for the power plant. Depending on the results of a feasibility study, Enchant Energy plans to install carbon capture technology on the power plant.

The Energy Transition Act includes emission requirements that the power plant will be unable to meet without the carbon capture technology, and the requirements will go into effect before the technology can be installed.

“They have their heads shoved up their methane relief valve so far that they don’t know what’s going on anywhere around them.”

“They have their heads shoved up their methane relief valve so far that they don’t know what’s going on anywhere around them,” he said.

The Energy Transition Act is intended to provide economic assistance to impacted communities as well as displaced workers while the state moves away from coal power. It received bipartisan support during the legislative session.

The City of Farmington has said it would have supported the Energy Transition Act if the legislation had included an amendment in support of a carbon capture technology feasibility study.

Another controversial topic out of the legislative session this year was gun control. Two firearm measures passed and were signed into law. These measures aim to reduce the amount of gun violence.

One of the laws will expand the federal background checks to almost all sales in New Mexico. The other is similar to existing federal laws that prohibit a person convicted of certain misdemeanor domestic violence offenses from owning a gun. That law would also allow guns to be taken from people who are subject to protective orders.

The controversy surrounding these gun laws, as well as bills that did not pass the legislature this year, led to backlash from the majority of New Mexico counties. 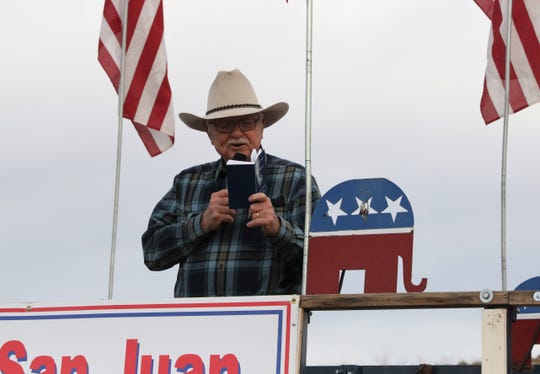 Meanwhile, one of the speakers criticized tariffs President Donald Trump has enacted.

“The federal government is taxing you and spending as recklessly as it ever has.”

Former San Juan County Libertarian Party Chairman Allen Elmore, who is the publisher of American Classifieds, said his business has been hurt by tariffs.

“We pay $450 a week now because of paper tariffs from Canada,” he said.

Elmore said the tariffs hurt other businesses as well, including companies that deal in steel or solar panels.

He encouraged Republicans to be alert even though their party won the presidential election.

“The federal government is taxing you and spending as recklessly as it ever has,” Elmore said.