There are many questions about installing carbon capture technology on the San Juan Generating Station, but the answers are not yet available. 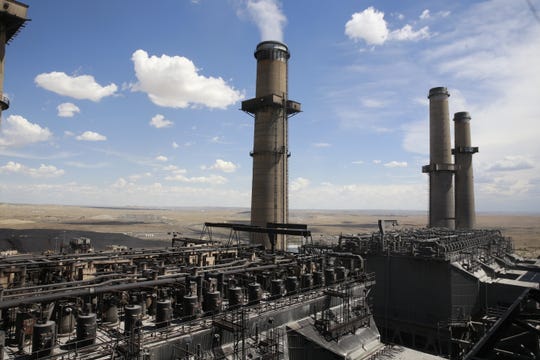 The San Juan Generating Station is pictured in 2015 in Waterflow. (Photo: The Daily Times file photo)

The City of Farmington has signed a non-binding letter of intent with Acme that paves the way for the New York-based firm to take ownership of the San Juan Generating Station.

Farmington is currently a 5 percent owner of the plant, but a partnership agreement allows Farmington to acquire the other 95 percent because the other owners are not interested in keeping it open after the coal supply contract expires in 2022.

Commissioner Chris Hunter is in the process of drafting a letter of support for Acme to study installing carbon capture technology on the plant. The commission will likely discuss this letter during its April meeting.

Commissioner Gordon Glass expressed concerns about carbon capture technology because it has only been installed on two commercial coal power plants, and has been expensive.

“I don’t think the economic desires to protect our economy and keep it going need to be so powerful that we become unrealistic about what we’re dealing with,” he said. “I think it’s really important that we’re clear headed on this.”

Those carbon emission requirements apply only to coal-fired power plants that generate at least 300 megawatts of power. There are only two coal-fired power plants in the state that currently produce 300 megawatts or more of power – the San Juan Generating Station and the Four Corners Power Plant. Four Corners Power Plant is located on Navajo Nation land across the San Juan River from the San Juan Generating Station.

Adair said the San Juan Generating Station cannot meet that requirement in its current design and would need more time for the carbon capture technology to be installed. Once installed, the power plant will produce a little more than 200 pounds of carbon dioxide per megawatt hour.

Adair said if Acme can prove the plan to install carbon capture is viable there could be legislation passed next year to allow the plant to remain open, or the city or Acme could apply for a variance to the carbon dioxide emission requirements.