Residents of 317 homes in some neighborhoods affected by the 416 Fire were told to be ready to evacuate if a storm series causes flash flooding. 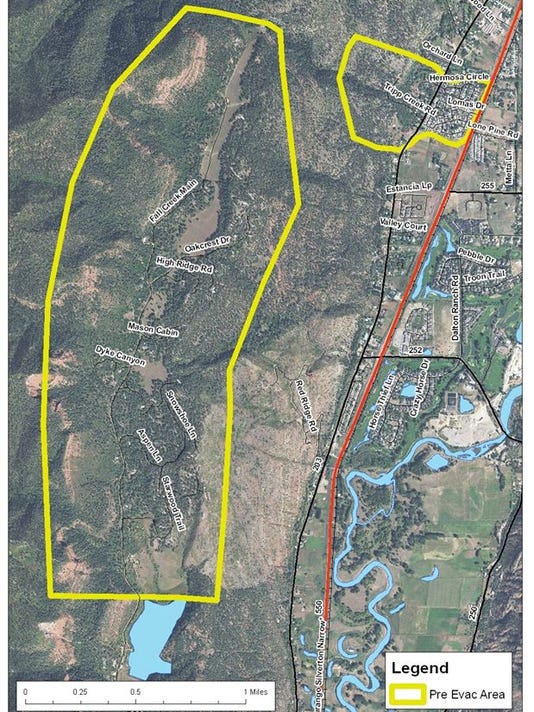 FARMINGTON — Residents of 317 homes in some neighborhoods affected by the 416 Fire have been notified via CodeRED phone alerts to be ready to evacuate if the storm series that began Friday night causes flash flooding.

“Due to the potential for rainfall to trigger flooding and debris flow in some areas in and adjacent to the 416 Fire over the coming days, a pre-evacuation order has been issued for 317 residences along County Roads 203 and 205,” La Plata County officials announced via Facebook.

The affected areas include the Falls Creek Ranch and High Meadows subdivisions, they said, as well as the Durango Regency mobile home community, “the Sanctuary, Hermosa Circle, and residences in the Tripp Creek area.”

The National Weather Service expects the storms to continue through Tuesday and to dump some heavy rain. The flash flood watch it issued expired at 9 p.m. Friday, but another one was issued for noon to 9 p.m. today. The 416 Fire team reported on its Facebook page at 2:30 p.m. today that it was raining heavily at the incident command post.

“Heavy rainfall over the 416 Wildfire burn scar is of particular concern with moderate to heavy rain likely from afternoon and evening thunderstorms,” the NWS said Friday night. “Residents near this wildfire and along the Highway 550 corridor near Hermosa should prepare for potential flooding impacts. Be sure to stay up to date with information from local authorities.”

Due to the intense heat from the 416 Fire, some areas that burned will have soil that is unable to absorb water as fast as soil not heated by a fire. Many areas also have storm debris that could be caught up in runoff.

In his daily operations briefing, Alex Robertson, operations section chief for the Portland National Incident Management Organization team (NIMO) that is managing the fire, said the fire has grown very little over the past several days because of rainfall and higher relative humidity.

He said the area near Purgatory Resort received the heaviest rainfall on Friday, up to two-tenths of an inch, but significant rainfall was not widespread. Nevertheless, he said, with more moisture in the forecast, fire managers do not expect any substantial fire growth for at least the next week.

La Plata County is holding a community meeting at 7 tonight at Miller Middle School, 2608 Junction St. in Durango, “to provide an update on 416 Fire activity as well as to discuss the potential for flooding and debris flow in drainages in and around the fire burn area,” officials announced Friday.

The fire has burned 54,129 acres and is 50 percent contained as it keeps 383 personnel busy. The cost by Friday was $29.5 million. Fire officials announced today that the NIMO that has been managing the blaze since June 22 will be turning responsibility for the fire back to the San Juan National Forest on Tuesday, as its containment objective has been met.