Emergency personnel are planning responses for the possible flash flooding this weekend’s rains may bring as crews continue to battle the 416 Fire. 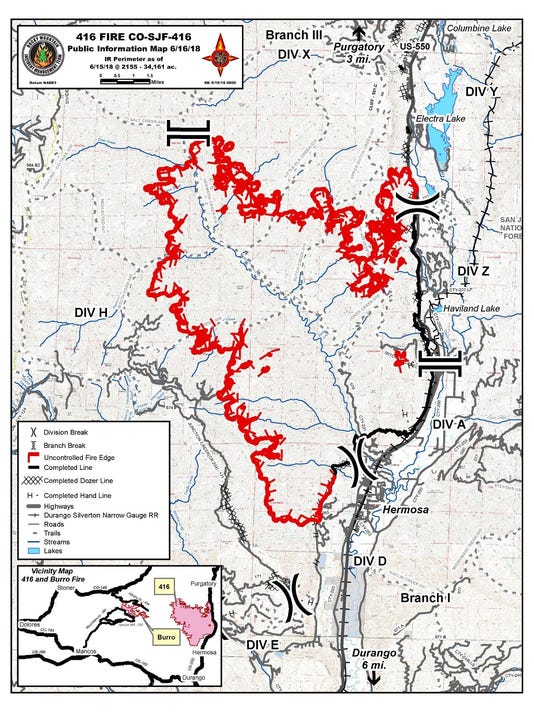 The 416 Fire is now 20 percent contained and slowing due to rainy conditions and high humidity.(Photo: San Juan National Forest/USFS)

FARMINGTON — Emergency personnel are planning responses for the possible flash flooding this weekend’s welcome rains may bring as crews continue to battle the 416 Fire near Durango, Colorado, and the nearby Burro Fire.

Firefighters report some progress containing the 416 Fire’s active southeast flank. They expect today’s fire activity to decrease due to lower temperatures and higher humidity due to the remnants of Hurricane Bud passing through the parched region.

Highway 550 will be open until 8 p.m. for escorted traffic unless conditions change.

The 416 fire has burned 34,161 acres. The fire was measured at 32,959 acres Friday morning and containment increased to 20 percent. Firefighters attributed Saturday’s higher acreage count to the use of imaging techniques to more accurately map the fire's size.

A firefighter is seen on the line of the 416 Fire near Durango, Colorado, in this undated photo posted by the 416 Fire team. (Photo: #416fireteam)

There were 1,124 firefighters assigned to the fire Saturday. The fire began June 1 and has an estimated containment date of July 31.

As of 11:30 a.m. today the other fire being fought by the Rocky Mountain Type 1 Team had an estimated control date in mid-July.

MAP OF EVACUATION AREAS: A map of  affected areas in and around Durango

The Burro Fire had burned 3,484 acres and was 10 percent contained. There are 166 firefighters fighting that blaze, which is located about 14 miles south of Rico, Colorado.

With a flash flood watch in place until midnight the 416 Fire management team said it is working with La Plata County Emergency Services to monitor conditions and plan for contingencies. 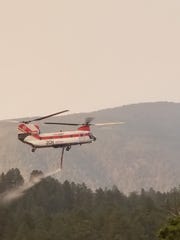 Air and ground crews continue to battle the 416 blaze. This photo was taken by the 416 Fire team. (Photo: #416fireteam)

“Hermosa Creek and Tripp Gulch are particularly susceptible drainages; when an area has burned,” the team said in a morning update. “Soil becomes hydrophobic, or water resistant, which causes water to rush over soil instead of soak in.”

Fire managers established a “flood support group” and put it on standby to help emergency managers upon request,” the update stated. “…Meteorologists from the 416 Fire will constantly monitor weather changes to provide advance notice of any developments. Residents may see more emergency service personnel moving into the area to prepare for any adverse weather events.” 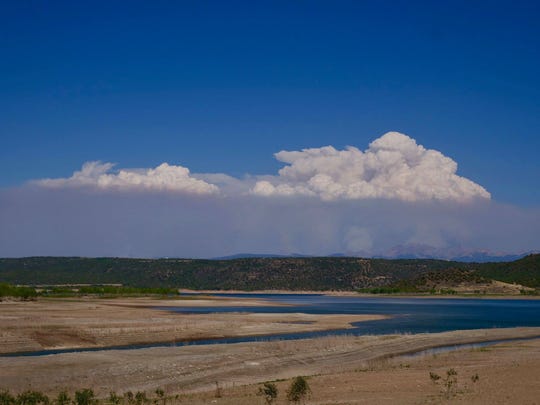 By June 12 the Burro Fire, reported on June 8, has grown to about 3,000 acres as it progresses toward the Hermosa Creek Wilderness at 0 percent containment. (Photo: #416fireteam)

“Fire spread may increase slightly in the afternoon if humidity drops, temperatures rise, or ridge top winds increase,” the team reported. “Overall, fire activity is expected to be minimal today.”

Air quality advisories can be found at http://sjbpublichealth.org/416-fire-updates/.

“Evacuated residents and businesses on the both the east and west sides of U.S. Highway 550 from mile marker 46.5 at Needles north to the San Juan County line were allowed return to their homes and businesses,” La Plata County officials announced on the county’s Facebook page. “This includes Two Dogs, Twilight Peaks, and Lake Purgatory subdivisions, Silver Pick Lodge, Purgatory, and Durango Mountain Resort. This affected 761 residential structures and 94 commercial structures.”

Those areas, however, are still under pre-evacuation orders.