The Bureau of Land Management’s Farmington District Resource Advisory Council toured the Brown Spring recreation site to wrap up their meeting this week. 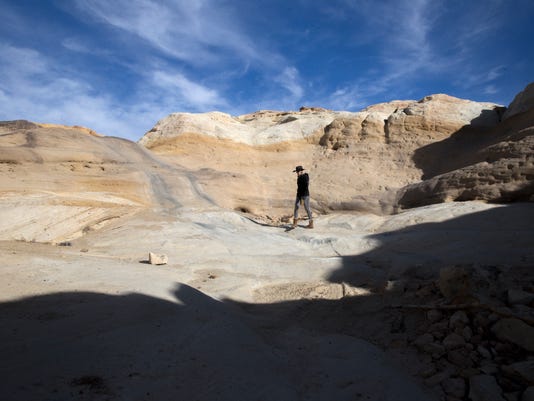 FARMINGTON — Work on a new project at the Brown Spring Campsite in the Glade Run Recreation Area is under way, and members of the Bureau of Land Management’s Farmington District Resource Advisory Council toured the site today to wrap up their meeting this week.

RACs are advisory bodies that “act as sounding boards for BLM initiatives, regulatory proposals and policy changes,” according to the BLM website. The Farmington District RAC is currently comprised of eight members from the district, which includes the Farmington and Taos field offices.

The RAC had its first meeting of the year at San Juan College on Tuesday, with the field trip to Brown Springs today.

The BLM Farmington Field Office is in the midst of a project to establish a campground and training grounds for all-terrain vehicles, such as four-wheelers or side-by-sides. Doug McKim, an outdoor recreation specialist from the Farmington Field Office who led today’s tour, said funding for the project comes from off-highway vehicle registration fees.

Partnerships with other organizations, including San Juan County and the New Mexico Department of Game and Fish, have kept project costs low, McKim said. The budget for the project is approximately $600,000, though the work to date has cost approximately $200,000.

McKim said the training arena features a restructured and graveled parking lot, and 10 campsites are open and available to tent and RV campers. The training arena also includes a “tot lot” for young motorists.

Workers are building pavilions and shelters with benches, grills and picnic tables at the site, which also will include vault toilets and Americans with Disabilities Act-compliant parking and sidewalks, McKim said.

The BLM also will build “skills trails” that feature common obstacles motorists might come across in the glades, including simulated boulder fields, log climbs, sand washes and slot canyons.

The site long has been used by outdoor enthusiasts in the Four Corners, and the World Extreme Rock Grand National Championship has been held at the site since 2016. Farmington District Manager Victoria Barr said the project is a result of public request and interest for “recreational use on public land.” 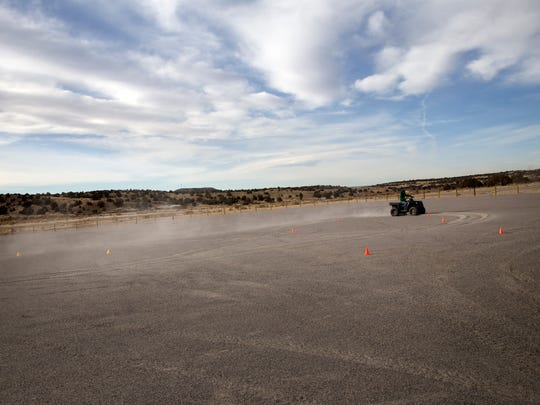 Jake McBride, an outdoor recreation technician intern with the Bureau of Land Management, demonstrates the use of the utility task vehicle training course during a tour Wednesday at the Brown Spring Campground north of Farmington. (Photo: Jon Austria/The Daily Times)

“Even though (the BLM office in) Farmington is primarily an oil and gas resource office, we’ve been getting, over the past five to 10 years, a lot more requests from the public for recreational uses on our public lands, so we’re really glad (to have) this opportunity to respond to the public need,” Barr said.

However, some of those who took the tour, which was open to the public, expressed concerns about safety and security at the site. Aztec resident Jack Scott said the recreation site is “a nice idea, but I see lots of problems.”

“It’s going to take a full-time staff member from BLM out here to prevent vandalism,” Scott said. “Everybody’s going to come out here and shoot it up, and destroy the toilets. I mean, for years we couldn’t even maintain toilets in Aztec in our parks. People would just come in and destroy them.”

McKim said there will be no supervision on site, but he hopes visitors will help regulate the site, which is already a popular and heavily trafficked spot.

“If I’ve got people camping over there, I think a lot of the chances of people throwing parties is diminished, so I think that the usage itself is going to eliminate some of those problems,” McKim said during the tour.

BLM engineer Troy Salyers said work at the Brown Spring recreation site should be complete by the end of the year.

The RAC discussed a variety of topics relating to the Farmington Field Office, including the resource management plan amendment regarding oil and gas development in the Greater Chaco area. Check the March edition of Energy magazine for more information.