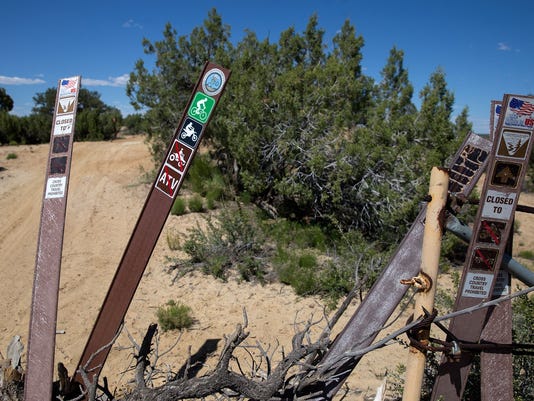 A field tour of Chokecherry Canyon in the Glade Run Recreation Area will be led by the Farmington District Resource Advisory Council of the Bureau of Land Management Wednesday morning.(Photo: Daily Times file photo)

FARMINGTON — The Bureau of Land Management’s Farmington District Resource Advisory Council will meet on Tuesday to hear updates on an amendment to the Farmington Resource Management Plan after hearing community feedback in a series of public scoping meetings in 2016 and 2017.

The RAC will meet from 8 a.m. to 4 p.m. Tuesday at San Juan College’s Henderson Fine Arts Center and will host a field tour of Choke Cherry Canyon Glade Run Recreation Area from 8 a.m. to noon Wednesday, according to a press release from the BLM.

Both the meeting and the field tour are open to the public, but attendees must provide their own food and transportation for the field tour, according to the press release. The RAC will hear public comment at 3 p.m. Tuesday, and RAC members will receive copies of written public comment submitted by the end of Monday at the meeting, according to a meeting announcement in the Federal Register.

The RAC will introduce its four new members to the public. The RAC is comprised of 10 members who are appointed by the U.S. secretary of the interior and represent either commodity, noncommodity or local area interests, according to BLM website. There are currently two vacancies on the council, and three members are scheduled to term out after this week's meeting, according to the BLM website.

During the meeting, the group will hear updates on the Farmington Resource Management Plan Amendment — the subject of a series of public scoping meetings hosted by the BLM and the Bureau of Indian Affairs held in 2016 and 2017 in Navajo communities — and on land use planning in the Taos Field office, as well as on the Taos general recreation plan and the Farmington Glade Run recreation implementation plan, according to the press release.

Other agenda items include overviews of fire and fuel plan treatments, and grazing permits in the Farmington District; a presentation about Section 106 of the National Historic Preservation Act, which requires federal agencies to consider effects of projects on historic properties, and a presentation about the BLM’s role in the Four Corners Air Quality Group.

The RAC may also address “any other matters that may reasonably come before” it, though the amount of time for individual oral comments may be limited depending on the number of public commenters, according to the press release.

The BLM changed venues in anticipation of a significant turnout — the meeting was originally scheduled for December at the Farmington Field Office, but the date was changed to accommodate scheduling conflicts. The venue was changed to the college “to accommodate increased interest from the public,” according to the press release.

The group gives advice and recommendations to the BLM regarding resource and land-management issues within the BLM Farmington District Office, which is “critical in assisting the BLM in continuing to be a good neighbor in the communities” it serves, according to a press release.