Ronald McDonald House Charities is celebrating its 35th year in New Mexico this year, and Four Corners families who have stayed at the charity house in the past at McDonald’s this week.

Local families who have stayed at the Ronald McDonald House in Albuquerque gathered to celebrate the charity's 35th anniversary of operations in New Mexico.

FARMINGTON — Ronald McDonald House Charities is celebrating its 35th year in New Mexico this year, and representatives from the Albuquerque house gathered with Four Corners families who have stayed at the charity house in the past at McDonald’s at 2215 E. Main St. on Wednesday.

Ronald McDonald House Charities of New Mexico is a 30-room house in Albuquerque that provides a comfortable and safe home for families whose children are in medical treatment, according to RMHC-NM executive director Kristin Rortvedt.

The house asks for a recommended donation of $15 a night and not only provides necessities like beds, laundry services and meals for guests, but a place that feels comfortable and safe in trying times.

“This supportive and caring environment creates a place where families can connect with somebody who understands. If you’ve never had a sick child, you don’t know what that feels like,” Rortvedt said, adding that families who stay at the charity house “often feel very isolated when they’re going through something like this, because they’re so afraid and scared, so having a supportive environment makes all the difference.”

There is only one Ronald McDonald House in New Mexico, located in Albuquerque, the only hub for pediatric care in the state. Families stay at the house for an average of 11 nights, though the range varies significantly. Rortvedt said the longest stay she knows of at the Albuquerque house was 362 days by an Aztec family.

Residents of San Juan County used the Ronald McDonald Charity House more than residents of any other county in the state in 2016, making up 20 percent of the house’s in-state guests, according to information provided by Rortvedt.

Deidra Francis of Shiprock, who stayed at the house for 31 days after her son Matthew was born seven weeks premature, said she knew of two other families from Shiprock during her stay there, and that being able to connect with people in similar situations was helpful. 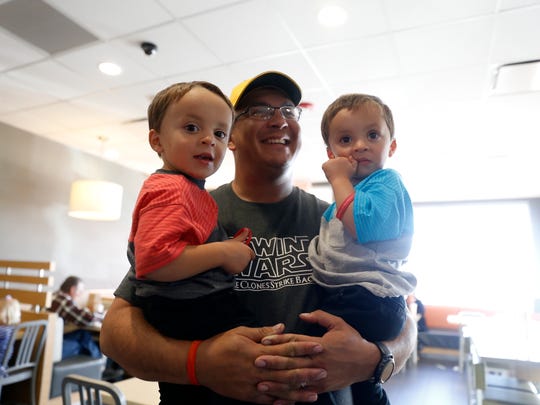 Sarah Thomas stayed at the charity house for 20 days this spring after her newborn son Hyrum needed emergency surgery. She said she felt safe and cared for in a situation that would have otherwise been “hell” — not only in terms of logistics like finding a place to sleep or do laundry, but also because of the supportive environment at the house.

“It just created this sense of community, because we were all struggling with different things with our kids, but it’s still hard, it’s still life threatening,” Thomas said. “I don’t know if traumatic’s the right word, but we were all going through a new experience, and it bonded us in a tender way.”

Bjorn and Emily Baal stayed at the charity house for 21 days after their sons, twins Thiago and Zander, were born two months premature. Bjorn Baal said between caring for their newborn sons and Emily recovering from a C-section and a complicated pregnancy — not to mention reassuring their daughter, who stayed with family members in Farmington — they were dealing with “an interesting juggling act” during their stay, and the understanding and helpful nature of the charity made a big difference.

“I think the biggest thing, when we stayed there, it was acknowledged that, ‘You’ve got enough on your plate to deal with. You don’t need to worry about this.’ I think that was the biggest moment. Our responsibility is to these guys and to be there for them, and we know we have a place to stay,” Baal said.

Megan Petersen covers business and education for The Daily Times. Reach her at 505-564-4621.