After signing an executive order calling for a review of more than two dozen national monuments, President Donald Trump handed the pen to U.S. Sen. Orrin Hatch, crediting the Utah Republican for being a driving force behind the order.

"Believe me, he’s tough," Trump said, nodding to Hatch during the April 26 signing ceremony. "He would call me and say, 'You gotta do this.' Is that right, Orrin?"

Two weeks later, Hatch and the rest of Utah’s all-Republican congressional delegation were meeting with newly-appointed Interior Secretary Ryan Zinke ahead of his on-site visit to the Bears Ears and Grand Staircase-Escalante national monuments, Utah’s two largest and the two that Hatch calls examples of Washington-ordered "land grabs" that lock out local communities.

The 83-year-old was already a 20-year veteran of the Senate when then-President Bill Clinton signed the Grand Staircase into monument status in 1996, and when he saw Bears Ears leaning the same direction two decades later he said the similarities were obvious.

"Nearly 20 years ago, the Clinton administration blindsided Utah with a massive 1.9-million-acre monument designation in Southern Utah," Hatch said, saying that in both cases a monument designation would go against the will of Utah’s elected representatives and local residents.

The debate over those two monuments has made Utah ground zero in what is likely to become a wide-ranging political battle over monument designations, one that most observers expect to end up being fought in the courtroom.

On one side is the contention that Bears Ears, like other western monuments, is among the places most in need of protection, an undulating collection of mountainous terrain rich in cultural significance to native tribes, thousands of archaeological sites, paleontological resources, scenic landscapes and some of the nation’s darkest night skies.

A large coalition of tribal leaders, environmentalist groups, archaeologists and others fought for the monument designation.

The monument proposal had the support of six of the seven Navajo chapters in the state, along with representatives from some two dozen other tribes and the National Congress of American Indians, as well as organizations like the Friends of Cedar Mesa and the Utah Diné Bikéyah, a conservation organization led by Native Americans.

"National monuments are designated so they may be preserved for all the people of the United States," said Madison Hayes, content manager for the advocacy group Alliance for a Better Utah. "These are national treasures. Once they are lost and sold off for development and extraction, there is no way to return these beautiful lands to their original state."

But Bears Ears, like the nearby Grand Staircase, is also rich with natural resources that area leaders contend could help prop up poor economies.

When Clinton signed the Grand Staircase into law, it closed ideas of mining coal out of potentially rich beds beneath the Kaiparowits Plateau, where the U.S. Geological Survey had suggested there were some 30 billion tons of minable coal.

Both monuments house what researchers suggest could be rich deposits of gas, oil, uranium and other resources.

Utah officials have long argued that environmental protections could be maintained while allowing for some resource extraction, and most have argued that both monuments ignored the wishes of local leadership.

Legal experts suggest Trump would have difficulty unilaterally rescinding a national monument designated by a previous president, since that ability is not spelled out in the Antiquities Act.

Time running out on Bears Ears

But there are arguments that he could amend or shrink the borders of monuments.

Congress has acted in the past to remove monument status and to make changes to existing monuments, and Utah’s lawmakers have been among those proposing legislative changes to the 1906 law.

Last year, Hatch and Sen. Mike Lee proposed one measure that would have allowed monument designations to expire if states didn’t sign off on them, and then a second bill that proposed exempting Utah from any new monuments. Neither made it to a vote.

Snow-covered remnants of an Anasazi tower ruin on the rim of Mule Canyon in the Cedar Mesa area of Bears Ears National Monument. Getty Images
Fullscreen

This May 23, 2016, file photo, shows the northernmost boundary of the proposed Bears Ears region, along the Colorado River, in southeastern Utah. Francisco Kjolseth, AP
Fullscreen 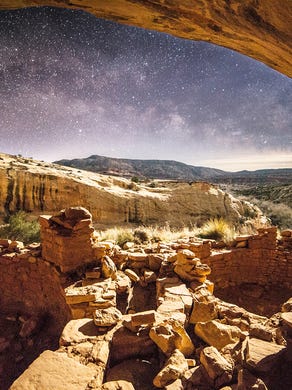 Snow-covered remnants of an Anasazi tower ruin on the rim of Mule Canyon in the Cedar Mesa area of Bears Ears National Monument. Getty Images
Fullscreen 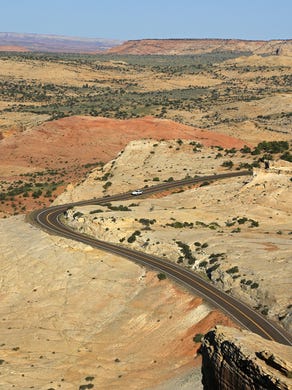 Our hiking group descended from a plateau down into the Escalante River Canyon and explored this remote former Anasazi Indian territory in southern Utah. Submitted by Kenny Karem
Fullscreen 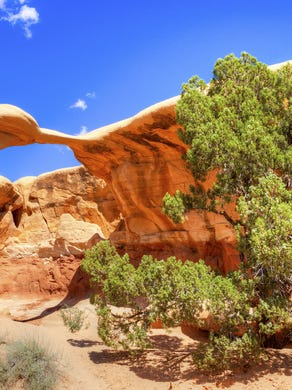 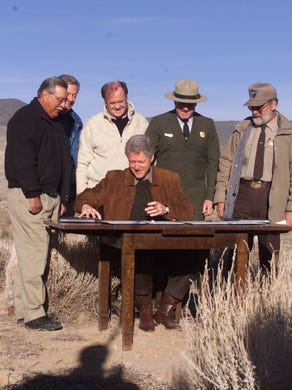 An example of Fouquieria splendens, or ocotillo plant, at the Dripping Springs Natural Area. The green nature of the plant indicates that it has rained in the area in recent two weeks. Jett Loe/Sun-News
Fullscreen

The Dripping Springs Natural Area in the foothills of the Organ Mountains includes hiking to natural and historic landmarks. Courtesy
Fullscreen

Cacti are among the plant species in the Organ Mountains-Desert Peaks National Monument. One project NMSU researchers have proposed is a vegetation map of various plant species within the monument. NMSU
Fullscreen

Snow is left on the Organ Mountains on Tuesday, January 31, 2017. Many are wondering what the future holds for the Organ Mountain-Desert Peaks National Monument as Rep. Steve Pearce has recently requested newly inaugurated President Donald Trump to roll back the size of the monument. Robin Zielinski/Sun-News
Fullscreen

The Vermilion Cliffs in northern Arizona are shrouded in fog early in the morning of Oct. 18, 2015. Tom Tingle/The Republic
Fullscreen

The Vermilion Cliffs stretch for 30 miles along U.S. 89A in northern Arizona. John Morey
Fullscreen

Juniper tree branches are used for steps into a big kiva at Lowry Pueblo in the Canyon of the Ancients National Monument in Colorado. V. Richard Haro/The Coloradoan
Fullscreen

Catus sit under a cloudy sky at Lowry Pueblo at the Canyon of the Ancients National Monument in Colorado. V. Richard Haro/The Coloradoan
Fullscreen

A tower still stands in the Painted Hand Pueblo in the Canyon of the Ancients National Monument in Colorado. V. Richard Haro/The Coloradoan
Fullscreen

Tourists look at the General Sherman Giant Sequoia tree which is the largest recorded tree by volume in the world, at the Sequoia National Park in Central California on October 10, 2009. Mark Ralston/AFP/Getty Images
Fullscreen 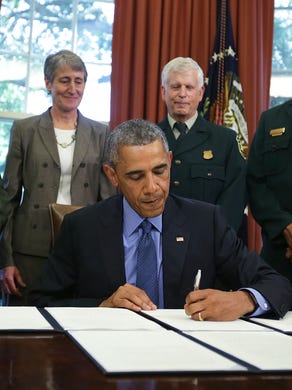 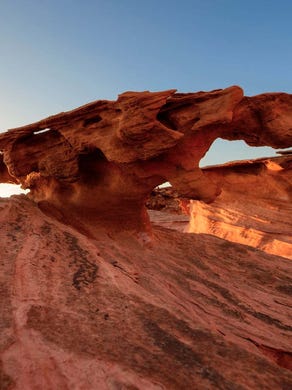 - -SHASTA VIEW: Dave Willis, chairman of the Soda Mountain Wilderness Council, looks at Mount Shasta from a point near Pilot Rock. Willis has been an activist for the preservation of the area since 1983. He now is pushing to have some of the Cascade-Siskiyou National Monument designated as a wilderness area to increase federal protection. (Tim LaBarge 001428) Tim LaBarge, Copyright 1999 Salem Statesman Journal;Yes
Fullscreen

The Big Morongo Canyon Preserve would be included in the proposed Sand to Snow National Monument. The popular birding area has an extensive elevated walking deck throughout its wetlands and trees. Jay Calderon, The Desert Sun Jay Calderon/The Desert Sun
Fullscreen

The aptly named Sand to Snow National Monument would include this cactus located in the Devil's Playground, a remote area near Highway 62 just west of Desert Hot Springs, named for its abundance of cacti. Jay Calderon, The Desert Sun Jay Calderon/The Desert Sun
Fullscreen

These foothills and snow-covered peaks, along with the entrance to the Mission Creek Preserve, will be included in the Sand to Snow National Monument. Jay Calderon/The Desert Sun
Fullscreen 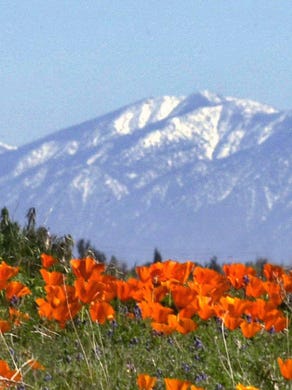 FILE - This Sept. 19, 2011 file photo cows graze along a section of the Missouri River that includes the Upper Missouri River Breaks National Monument near Fort Benton, Mont. U.S. government officials on Thursday, Dec. 1, 2016, finalized an overhaul of how they plan for oil and gas drilling, mining, grazing and other activities across public lands in the West. The move by the Bureau of Land Management aims to address longstanding criticism of an often-cumbersome process that dictates development across almost 250 million acres of federal lands, primarily in 12 Western states and the Dakotas. (AP Photo/Matthew Brown, File) Matthew Brown, AP
Fullscreen

But Trump’s win on Election Day has raised the hopes of state officials that a Republican administration might take a different look at the monuments.

Utah’s back-and-forth with federal agencies over control of federally-controlled lands within its borders goes back decades, reaching a fevered pitch in recent years as state lawmakers propose suing over control of about 31 million acres.

County commissioners, along with county and municipal leadership across the region, Utah Gov. Gary Herbert and other state leaders have pushed for changes to the monument designation.

The Legislature passed a resolution this year demanding the federal government revisit the issue.