In an effort to draw attention to the local manufacturing industry, two area businesses took part in a celebration

The day, which was designated as Oct. 2, was given a week's worth of space — Sept. 29 through Oct. 2 — in a proclamation by Gov. Susana Martinez to help show off New Mexico's contribution to the manufacturing industry and promote its jobs to students as a viable and satisfying career.

"Engineering, and research and development falls under manufacturing. These jobs are not dark, dirty dungeons anymore," Infante said. "We want to highlight that so the next generation of students won’t cross these great jobs off their lists."

One of the state's participating manufacturing businesses is Jack's Plastic Welding Inc. in Aztec.

On Tuesday, the river-sports equipment manufacturer opened its doors and offered public tours of its dual storefront operation. On Friday, the small business gave a special tour for Democratic U.S. Sen. Tom Udall, who came by during a visit to his home state before returning to Capitol Hill on Sunday.

Owner Jack Kloepfer led Udall on a tour of the Main Avenue business he has run for 33 years, most of those years in Aztec.

Kloepfer, 62, primarily sells whitewater rafts, kayaks, catarafts, dry bags and other river-oriented outdoors equipment. But he told Udall that he also has been branching out to stay profitable.

Alongside a dozen 10-foot, 6-inch stand-up paddle boards that were leaning against a wall were plastic inflatable products that are popular — not with outdoors types, but with oilfield workers. Kloepfer pointed to inflatable spill containment systems and cellar plugs used at well sites throughout the San Juan Basin in his showroom that he said are a growing portion of his business. He would like to sell more, but he said marketing nonrecreational products has been a challenge.

"We can make more money per hour on environmental stuff as opposed to our recreational," he said. "Industrial products, now we're at about 15 (percent) of my total business."

His best seller is called the Paco Pad, a PVC-coated polyester sleeping mattress, he said. He sold more than 2,000 of them last year, he said.

Kloepfer's array of products sells primarily to customers in the Four Corners region, but he also has customers across the U.S. and elsewhere, from Denmark and Mexico, he said.

He makes round bags with shoulder straps he calls "buckets" in bright rainbow colors using soft inflatable boat fabric that can hold as much as five gallons of water. The bags have been popular with customers in Japan, who prize them for their color combinations and use them for shopping or as fashionable handbags.

"We're not going to use them for water, we're going to use them as handbags, so can you make them in these colors, and this and that, you know?" Kloepfer said, characterizing the wishes of his Japanese clientele. "What they also love about them is our logo (affixed to each bag), especially the part that says, 'Made in U.S.A.'"

Kloepfer said he stuffed a foam pad in the bottom of one and uses it to tote around his laptop computer.

Udall asked Kloepfer how the local rafting industry was doing.

"Well, we had a hell of an event this summer," he told Udall, referring to the Gold King Mine spill that sent a plume of heavy metals-laden waste water down the Animas and San Juan rivers.

Last month, Gov. Susana Martinez rolled out the state's new energy policy, which listed proposed rail lines from the Four Corners region to Interstate 40 that would increase transportation of parts and goods from the manufacturing sector to markets outside the state.

Aztec Mayor Sally Burbridge and Aztec City Manager Josh Ray came by to see Udall and take him on a tour of the town. One of those dealt with the completion of the Aztec's eastern arterial road project, more than 10 years in the making, that Burbridge pointed out was critical to helping businesses along the busy downtown thoroughfare survive.

As they stood in front of Kloepfer's business watching heavy truck traffic whiz by on downtown's Main Avenue — which is also U.S. Highway 550 — Udall told Burbridge that he and other congressional Democrats would be pushing this month to secure a long-term extension of the Highway Trust Fund, which is paid for through the gas tax. Funding for the bill has been undercut in recent years because of increasing numbers of hybrid and fuel-efficient cars on the road, Udall said.

Moments earlier, a truck had rumbled past Ray's truck parked out front, grazing the driver's side mirror and knocking out the glass.

"That's one reason (to complete the arterial road) right there," Burbridge said to Udall.

Also on Friday at Process Equipment & Service Co. in Farmington, representatives of the oilfield equipment manufacturer led tours of their facility on U.S. Highway 64. 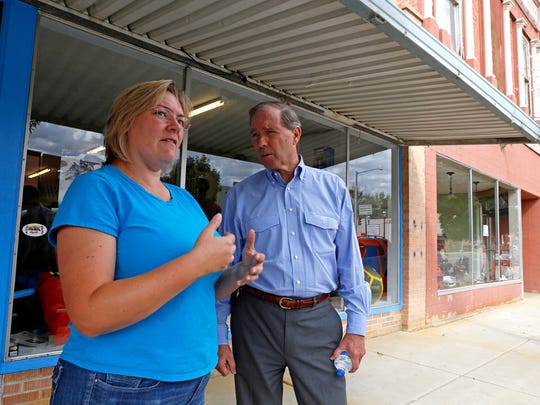 PESCO, which was founded in 1970, employs nearly 300 workers — welders, pipe fitters, painters, sandblasters and truck drivers, primarily — across 100,000 square feet of space at its main location and another satellite location off the La Plata Highway.

Co-owner Blake Wallace said PESCO specializes in custom oilfield equipment made to spec on site and shipped locally, nationally and to far-flung customers in places like China and Australia.

Brian Smith, a PESCO weld trainer, said the company encourages its employees to move up and improve their skills on the job. Smith said that PESCO will hire welders without any experience and train them in paid positions and support their advancement.

Smith led a tour on Friday through the hangar-sized fabrication facilities at PESCO where a majority of workers were filling an order for 100 submarine-size, three-phase separators for the oil and gas industry. The separators are vital equipment in the San Juan Basin and other basins around the country as operators use them to separate oil, gas and water.

Pam Gathings came from her home in Bloomfield to take the tour, encouraged by her contacts at the Quality Center for Business and WESST at San Juan College to have an up-close view of manufacturing in San Juan County.

This year, the 53-year-old Gathings patented a collapsible cargo carrier she designed that she hopes to launch soon under her own brand as an independent manufacturer. Even though PESCO's operations likely would drarf what she plans to produce, she asked lots of questions of Smith as he showed the process of making large-scale oilfield equipment from scratch.