The Trump administration is pushing for increased exports of natural gas and other energy sources as it seeks U.S. energy dominance in the global market.

Energy Secretary Rick Perry is worried about how the previous administration's energy policies affect the U.S. Video provided by Newsy

WASHINGTON (AP) — The Trump administration is pushing for increased exports of natural gas and other energy sources as it seeks U.S. "energy dominance" in the global market, Energy Secretary Rick Perry said Tuesday.

He and President Donald Trump have offered a "comforting" message to energy companies seeking to export liquefied natural gas, or LNG at huge terminals in Texas, Louisiana and other states, Perry said: "If you meet the rules, here's your permit."

Perry also said he has not seen a widely expected department study into the reliability of the electric grid. A draft version leaked to news outlets indicates that renewable power and federal regulations have had little impact on reliability.

"There are lots of people breathlessly waiting to read that" report, Perry said — and he is among them.

In a speech at the National Press Club, Perry called LNG exports a "major driver" of jobs and energy production and a key way to reduce global emissions of greenhouse gases that cause global warming.

"We can have a cleaner environment and a strong, prosperous nation," Perry said. "We do not need to sacrifice one for the other; nor will we follow the course other allies have taken to their detriment."

Perry cited a drive for renewable energy in Germany that he said has forced electricity costs to record highs. "That is not the direction the United States plans to take under the Trump administration," he said.

Perry also touted increased U.S. oil and coal exports as part of a strategy to boost energy production and jobs. Trump has heralded an "energy revolution" that he says celebrates American production on American soil, noting that the U.S. is on the brink of becoming a net exporter of oil, gas and other energy resources.

Trump signed an executive order in April to expand oil drilling in the Arctic and Atlantic oceans, reversing restrictions imposed by President Barack Obama. Trump has also pushed to revive U.S. coal production after years of decline and to boost energy production on federal lands.

Perry speaks during the daily briefing at the White House on June 27, 2017. Susan Walsh, AP
Fullscreen

Perry shakes hands with members of his staff following his swearing-in ceremony on March 2, 2017, in the Eisenhower Executive Office Building. He was confirmed by the Senate as Energy secretary earlier that day. Andrew Harnik, AP
Fullscreen 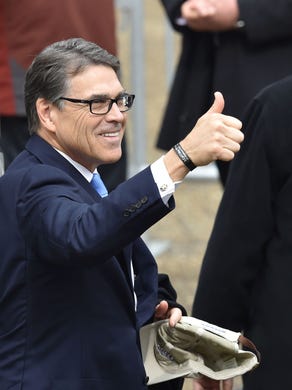 Perry arrives for the presidential inaugural parade in front of the White House on Jan. 20, 2017. Nicholas Kamm, AFP/Getty Images
Fullscreen 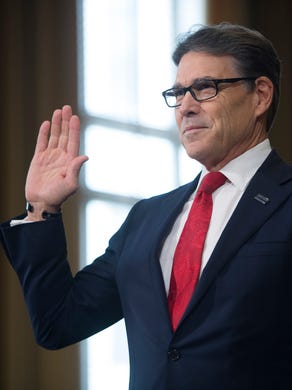 Perry is sworn in for his confirmation hearing before the Senate Energy and Natural Resources Committee on Jan. 19, 2017. Jack Gruber, USA TODAY
Fullscreen

Perry appears before the Senate Energy and Natural Resources Committee on Jan. 19, 2017, for his confirmation hearing to be Energy secretary. Jack Gruber, USA TODAY
Fullscreen

Perry walks through the lobby on his way out of Trump Tower on Dec. 12, 2016, in New York. Drew Angerer, Getty Images
Fullscreen

Perry speaks during the Eagle Council XLIV, sponsored by the Eagle Forum, at the Marriott St. Louis Airport in St. Louis on Sept. 11, 2015. During his speech Perry ended his second bid for the Republican presidential nomination. Robert Cohen, AP
Fullscreen

Perry speaks at the Defending the American Dream summit hosted by Americans for Prosperity at the Greater Columbus Convention Center in Columbus, Ohio, on Aug. 22, 2015. Paul Vernon, AP
Fullscreen

Perry speaks during a visit to the Iowa State Fair on Aug. 19, 2015, in Des Moines, Iowa. Paul Sancya, AP
Fullscreen 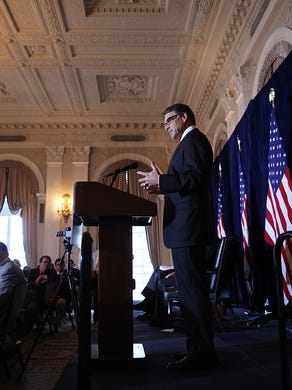 Perry speaks during a cookout and rally at Nashua Community College in Nashua, N.H., on June 7, 2015. Cheryl Senter, AP
Fullscreen

Perry speaks to supporters during the launch of his presidential campaign in Addison, Texas, on June 4, 2015. Tim Sharp, AP
Fullscreen 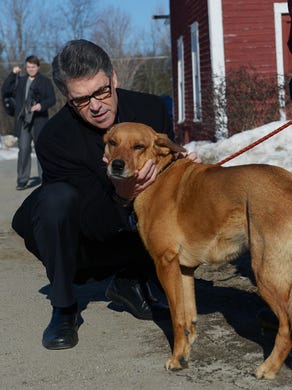 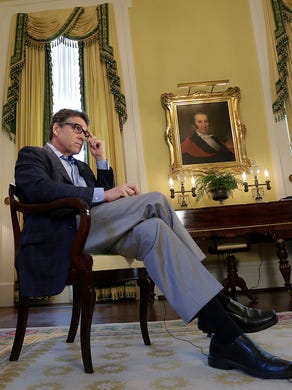 Perry observes a training session with the 36th Engineer Brigade as they practice putting on and wearing protective clothing and gloves on Oct. 9, 2014, at Fort Hood, Texas. The brigade was set to deploy to Liberia to help fight the Ebola outbreak. Kin Man Hui, San Antonio Express-News, via AP
Fullscreen 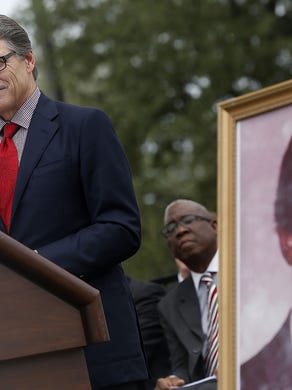 Perry speaks during a ceremony for the Timothy Cole memorial in Lubbock, Texas, on Sept. 17, 2014. Zach Long, Lubbock Avalanche-Journal, via AP
Fullscreen 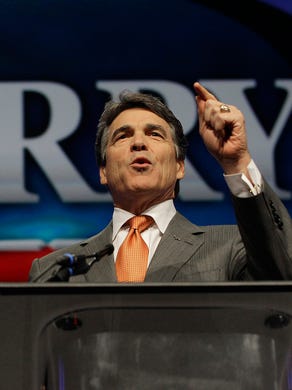 Republican pf Former Texas Gov. Rick Perry has been nominated by President-elect Donald Trump to become Secretary of Energy. He faces a confirmation hearing in the Senate on Thursday. L.M. Otero, AP
Fullscreen

Perry prepares to eat a hamburger that contains the beef product known as pink slime, or lean finely textured beef, on March 29, 2012, in South Sioux City, Neb. The governors of Iowa, Texas and Kansas and lieutenant governors of Nebraska and South Dakota toured the Beef Products Inc. plant to show their support for the company and the several thousand jobs it creates. Nati Harnik, AP
Fullscreen

Perry eats a fruit cup as he campaigns at the Faith and Freedom Coalition Prayer Breakfast in Myrtle Beach, S.C., on Jan. 15, 2012. Charles Dharapak, AP
Fullscreen 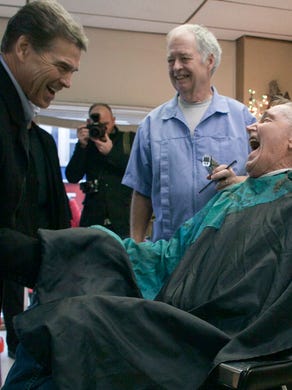 Perry is embraced by Lt. Gov. David Dewhurst after delivering his State of the State speech on Jan. 26, 2005, in Austin, Texas. Harry Cabluck, AP
Fullscreen 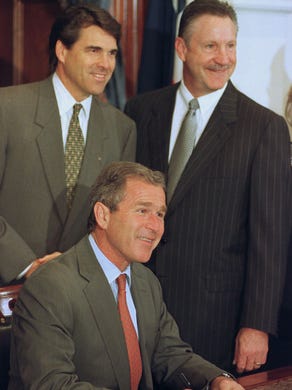 Rick Perry, then the Republican candidate for Texas agriculture commissioner, talks with reporters on Oct. 19, 1990, during a campaign stop in Waco, Texas. Perry traveled across the state in a vintage World War II B-25 bomber. Rod Aydelotte, Waco Tribune-Herald, via AP
Fullscreen

U.S. coal exports rose sharply in early 2017 amid increased demand in Asia and Europe, the Energy Department said Tuesday. Exports were up by 8 million tons through March, a 58 percent jump over the same period last year. Top destinations for U.S. coal were the Netherlands, South Korea and India.

Despite the increase, volumes remain well below what the industry anticipated when it announced plans over the past decade to build or expand coal ports in Oregon, Louisiana, Washington state and California.

On the grid study, Perry said critics on all sides were "throwing jell-o at the wall" on a report that is not yet finished. "I haven't seen it yet," he said.

A draft version leaked to news outlets indicates that renewable power and federal regulations have had little impact on reliability. The draft report cites declining demand and plunging costs of natural gas for early retirements of traditional coal and nuclear power plants.

The Energy Department has said the draft study is out of date and a new version could have different conclusions. Renewable energy advocates, including some Republicans, have expressed concern that the report could be used to undermine support for wind and solar power.

The report is expected to be made public this month, but Perry offered no firm timetable. "Like you, I'm breathlessly waiting to get my hands on it," he said.