A subsidiary of the Navajo Nation Oil and Gas Company is being recognized for its safety performance record last year.

FARMINGTON — A subsidiary of the Navajo Nation Oil and Gas Company is being recognized for its safety performance record for having no OSHA recordable incidents last year.

The award was presented during a luncheon at API's Pipeline Conference on April 25 at the Hyatt Regency Hill Country in San Antonio, Texas.

API is a national trade association representing the oil and natural gas industry.

The other winners were Crimson Pipeline LLC, CITGO Pipeline Company, Portland Pipe Line and MIPC LLC, according to an API press release.

Joseph Robertson, NNOGC director of pipeline operations, said it's been about 10 years since Running Horse Pipeline has had an OSHA reportable incident.

"I think it represents our commitment to safety and making sure everybody gets home safe," Robertson said about the award.

Running Horse Pipeline collects and transports crude oil from the Greater Aneth Field in Utah along with crude oil produced in southeastern Utah, according to a NNOGC press release.

The 16-inch pipeline is about 87.5 miles long and runs from Montezuma Creek, Utah to a pump station near Morgan Lake and ends at a crude oil station in Bisti, south of Farmington. 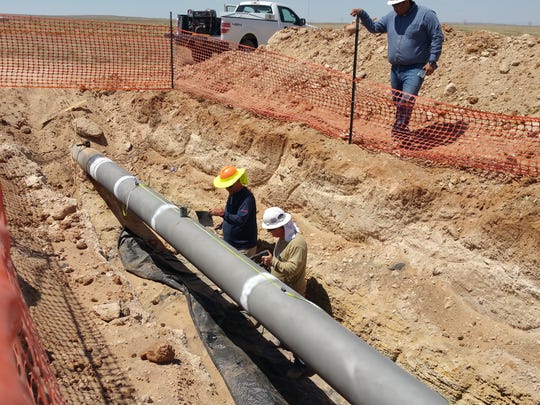 "Our primary focus is to deliver oil safely (and) economically to the markets from the gathering fields," Robertson said.

To qualify for the award, a company needs to have a zero Total Recordable Incident Rate for employee and contractor safety performance for the previous calendar year.

The Occupational Safety and Health Administration defines a recordable incident as any work-related fatality, any injury or illness that results in loss of consciousness, restrict work, cause employees to take time off from work or transfer to another job, according to the OSHA website.

Employees maintain the pipeline and collect the crude oil by driving tanks to remote wells and taking it back to tanks in Montezuma Creek, Robertson said.

As part of maintaining the pipeline, employees inspect the pipe to ensure there is no corrosion on the pipe and the welds meet specifications.

Robertson gives a lot of credit for the award to NNOGC Senior Safety/Health/Environmental and Facility Supervisor CJ Woodie and his staff.

"It's a big accomplishment for the pipeline being that it's a high-hazard occupation," Woodie said. "I'm very proud of the guys working in the field."

Some of the hazards of working on the pipeline occur when pipeline operators complete routine maintenance.

"A lot of it has to do with the potential toxic atmosphere that could pose a threat to human life," Woodie said.

For Woodie, he said he has worked hard to evolve the culture around safety performance.

Part of the effort includes weekly safety meetings, safety training and ensuring potential hazards are discussed during "tailgate" meetings engineers and operators have before starting any project.

"I think that's key to applying the safety program within the pipeline operations," Woodie said.

Pipeline Engineer Joshua Benally said the "tailgate" meetings help workers learn about possible hazards of the job they are working on.

Benally has learned to keep an eye on the type of soil around the pipeline as workers excavate the area of the pipeline they plan to repair.

"Being out there is dangerous for us," Benally said.  "We want to go home every night."