Eighth graders from various middle schools throughout the county were bused in for the purpose of learning about the science and technology surrounding oil and gas exploration and production. The two-hour sessions consisted of discussions, hands-on activities and film presentations that introduced the students to issues such as the formation of oil and gas reservoirs, how geological sedimentation occurs, the processes involved in oil and gas extraction, and why it's important to develop clean, renewable energy sources.

The topics were presented by volunteers from local oil and gas companies, as well as educators from San Juan College.

The coordinator of Energy Week, George Sharpe, said this is the 13th year the event has taken place. Previously, it was held at the Farmington Museum. Officials switched the venue to the School of Energy because the school already has the technology and large equipment available to use during the training.

“We’ve chosen eighth graders (for the program) because they’re currently taking earth science,” said Sharpe. “We’re trying to tie the material in with their science curriculum, which includes learning about things like geology and rocks. What they study in school is sort-of nebulous, so here we are hopefully showing them real-world applications like what types of jobs are available in the industry, and why the industry is important to our economy. It gives them a different perspective.”

This is the first year for the Farmington Desk & Derrick Club to co-host Energy Week.

"Some of the other companies were no longer able to be involved because of the downturn in the economy," said Philana Thompson, who serves as the Desk & Derrick Club's treasurer. Thompson also works as regulation compliance specialist for Merrion Oil & Gas. "Our club is all about supporting energy exploration and education, so this is a perfect fit for us."

Like Sharpe, Thompson believes eighth grade is a good age to expose young minds to the various aspects of energy production, and said it’s particularly important for kids to understand both sides of the industry, not just the need to develop clean energy.

“Many of these students’ parents work in the energy industry, yet they don’t understand how it works,” she said. “We want a clean environment too, but we want the students to understand how hard we (in oil and gas industries) work to reduce our carbon footprint. They need to understand that until clean energy is able to reach consumer demands, we need our existing industries.”

Desk & Derrick Club member Shacie Murray will be receiving her degree in petroleum engineering after this semester, and also works as an intern at Merrion Oil & Gas. During the introduction to Energy Week, Murray provided the students with an initial overview on petroleum exploration, and touched on the complicated issues surrounding the development of cleaner energy sources.

After the overview, students broke up into groups and visited four stations to further explore oil and gas industry issues.

Jonathan Dobbs is on the advisory committee for the Sherman Dugan Museum of Geology, housed in the atrium of the School of Energy. Dobbs showed the students some of the unique minerals and fossils on display in the museum.

“This is a good opportunity for us to introduce them to the museum and the different types of geology and minerals,” he said. “We have fossils, rocks and minerals from all over the world. Some are from the Dugan collection, and a lot are on loan. Our collection is comparable to many other rock and mineral museums in the U.S.”

John Burris, a professor of geology at San Juan College, pointed out to the students a large fossil head of a megacerops - a distant relative of the rhinoceros that lived in the late Eocene Epoch - as well as a cave bear claw and various minerals that were on display.

“There’s such a diversity of minerals here,” he told the students gathered. “Minerals play such a role in everyday life. From electricity to paint, all are made possible by minerals.”

The students were especially intrigued by the collection of fossils.

“This is really interesting,” said Tim Jones, an eighth grader from Koogler Middle School. “It’s amazing to think that these fossils (represent) animals that were alive and real at the time. And it’s so good to see the number of minerals in person. It’s something really different for us to experience.”

Koogler classmate Janna VanAuken said she was surprised at the variety of information presented.

“I even learned that there’s another name for fossilized poop: coprolite,” she said. “Although I don’t think I’ll have a career with geology, I do find it really interesting.”

At the School of Energy’s outdoor simulation area, which is designed to show students actual equipment found on an actual well site, Steve Calkins, assistant production foreman for Merrion Oil and Gas, talked to the students about the importance of well-site safety.

“If a sign says keep out, you need to keep out,” he told the students.

Calkins said this is his 10th year participating in Energy Week.

“What we’re trying to do is give them an overview of what the equipment is. They just don’t realize how dangerous equipment can be. They don’t understand you can put your hand in a piece of equipment and lose an arm. (The lack of understanding) frustrates me so much.” 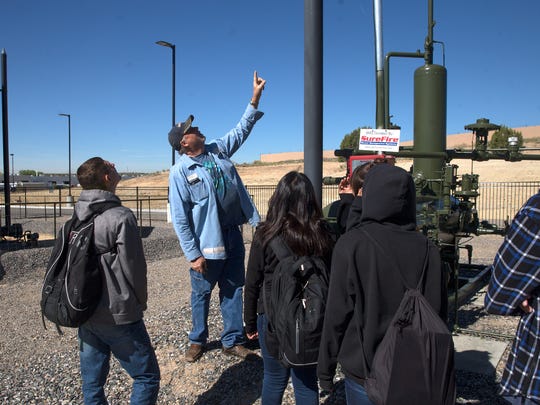 Back inside, Desk & Derrick Club member Runnel Seale told the kids that over 6,000 products used in everyday life originate from petroleum.

“From medicine to plastics, so much of what we touch in our daily lives comes from petroleum,” she said. “Did you know that even your weed eater is 60 to 70 percent plastic? And things used in transportation, of course – all of it comes from petroleum products.”