Tom Dugan reflects on more than half a century of exploration in the San Juan Basin, and talks about drilling plans for 2017

Today, the company has approximately 200,000 acres of leases and 960 operating wells, and plans to drill 15-17 new coal-bed methane wells 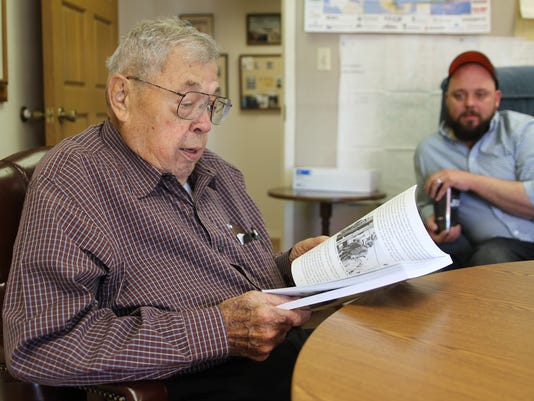 FARMINGTON — A recent report that drilling rigs are once again popping up in the San Juan Basin has many wondering if this might signal an upward trend in production, or if we're just seeing a passing surge.

All four of the current drilling rigs working in the San Juan Basin are being operated by the larger production companies — namely Encana Corp., WPX Energy and BP America —- but there's at least one smaller, local operator that plans to do some drilling in 2017.

Dugan Production's founder and president, Tom Dugan, recently sat down to discuss his company's upcoming plans to drill 15 to 17 gas wells within the Fruitland Formation, and reflected on the journey that has brought him to this point.

The ninety-one-year-old said he's seen many booms and busts in local oil and gas development in the last half century.

"I came to New Mexico in 1952, and worked with (what was then) Phillips (Petroleum Company) at a camp in Gobernador, New Mexico," said Dugan. "I was working on producing and servicing wells. There wasn't a grocery store for 50 miles, and it wasn't easy on my wife — it was a lonely place for her." In 1955, Dugan and family moved to Farmington where he worked for a geologist for a few years before quitting and establishing Dugan Production in 1959, initially working out of his home as a contractor and consultant.

As his business grew, Dugan seized on opportunities to obtain leases and drill on the fringes of the San Juan Basin, as larger companies had already snatched up most of the drilling rights within the Basin.

In 2011, he partnered with the Canadian-based production company Encana.

"They did a lot of drilling, and carried us for interest," he said.

What this means is that Encana paid 100 percent of the drilling costs for these wells, and Dugan Productions received a percentage of each well's proceeds.

Today, Dugan Production, which operates out of two buildings in Farmington, has approximately 200,000 acres of leases located on the western and southwestern portions of the Basin, and has 960 operating wells, many of which are methane gas.

Drilling into the future

Dugan and his employees are gearing up for an active year of production.

"We've got a big drilling program planned," said Dugan. "These will be shallow, vertical (coal)bed methane wells located south of Farmington. We're drilling because the leases are expiring soon."

"I think we'll end up being the second largest driller in the basin during 2017," added Kurt Fagrelius, the company's vice president, adding that the company has not yet decided who will provide well services for the drilling projects.

Fagrelius said the length of time it takes for operators to obtain a permit to drill is one of the main reasons more drilling isn't currently being done in the Basin.

"The rocks will support increased drilling, but in addition to the permitting times, we have to pay a deduct to Western (Refining)," he said. "More drilling is being done in the Permian because they can get the permits quicker, and the deduct is less."

The deduct refers to the charge Western Refining applies to have the product transported from the well site to their refinery in Gallup. Because wells being drilled in the Permian Basin, which is located in Texas and in the southeastern part of New Mexico, are closer to refineries and other infrastructure, the transportation deduct is less in that region.

Fagrelius explained that the longer wait time for Basin drilling permits is mainly because most of the land in the Basin is federal. Permitting here can often take 12 to 18 months, whereas with state or private lands, permits to drill are often issued in as little as 10 to 14 days.

Although the company drilled vertical oil wells up until the 1980's, like other smaller companies operating in the Basin, the days of drilling for oil are over, as horizontal drilling technology has taken over oil production, and the only companies that can afford this type of expensive drilling are the larger ones.

Despite this, Dugan Production has managed to carve out a niche for itself within the Basin. Even in the face of lower oil and gas rates, the company's many producing wells have allowed it to thrive.

"Coal bed methane has been our bread and butter for the past 25 years," said Fagrelius. "We acquire leases and hold on to them. Dugan excelled at putting together a large block of acreage, and the key is to hold onto that acreage."

John Alexander also serves as vice president for the company, and he agrees that a key factor for the firm's success is the decision to stick with the exploration and development of gas.

"A lot of the bigger guys are enamored with oil, but we haven't given up on natural gas," he said. "We love what we do here, we're good at it and we're proud we've been successful at it. We think natural gas has a big future."

So much so that in 2002, Dugan co-authored a book with geologist Emery Arnold entitled "Gas: Adventures into the history of one of the world's largest gas fields — the San Juan Basin of New Mexico."

Dugan, Alexander and Fagrelius agree that the company's most important asset is its people, and are happy to report that while other oil- and gas-related companies have had to reduce staff during this latest downturn, the firm has not had to lay off any of its 168 employees. 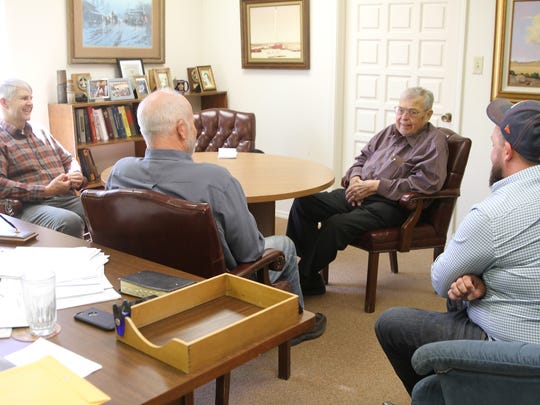 "That's pretty unusual for the San Juan Basin, and we're pretty proud of it," said Alexander. "We've got a lot of loyal people who have been here a long time, some of them 40 years or more," he said.

Dugan, who said the company recently celebrated its 58th anniversary, agreed that his employees are like a family. In fact, many members of his own family are also actively involved in the firm's operations.

"It's a very old school approach here, and we do a lot of things in-house," said Sean Dugan, Tom Dugan's grandson and executive assistant.

Tom Dugan says that he and his team will continue with the "old school approach" that has brought them much success, and will hold steady in their pursuit of gas in the Basin.

"I just really like coming down here and working with these nice people," he said.