President Donald Trump on Tuesday signed legislation striking down a rule that requires oil and gas companies to disclose payments to the U.S. or foreign governments for commercial development. (Feb. 14)

FARMINGTON — A recent increase in drilling rigs in the San Juan Basin has some wondering if the downturn in oil and gas production might be starting to turn around.

There are currently four active drilling rigs in the basin, according to a weekly rig report that tracks rigs and wells in the area. While that may not seem like a large number, when compared to reports of active rigs going back 16 months, it's significant.

The last time the report listed four or more active drilling rigs in the basin was November 2015. During subsequent months, that number gradually dwindled to just one rig, and at one point last November, there were no active rigs operating in the basin. The number of active rigs started increasing in December.

Wally Drangmeister, spokesman for the New Mexico Oil and Gas Association, said in an email that oil and gas companies in northwest New Mexico have demonstrated "incredible resilience and innovation in dealing with challenges of increased regulations and low commodity prices."

"We are very pleased to see that there are now four drilling rigs operating in the San Juan Basin," he said. "The 50 to 75 full-time jobs created by each operating drilling rig are badly needed in the region, and we hope this positive trend continues."

Two of the current active rigs belong to BP America. One belongs to Encana Corp. and the other to WPX Energy.

“We are very pleased to see that there are now four drilling rigs operating in the San Juan Basin. The 50 to 75 full-time jobs created by each operating drilling rig are badly needed in the region, and we hope this positive trend continues.”

"We're planning to invest up to $170 million locally this year to run a rig, drill about 40 wells and build new infrastructure," said WPX spokesman Kelly Swan in an emailed statement. "The uptick in activity supports a lot of local jobs." 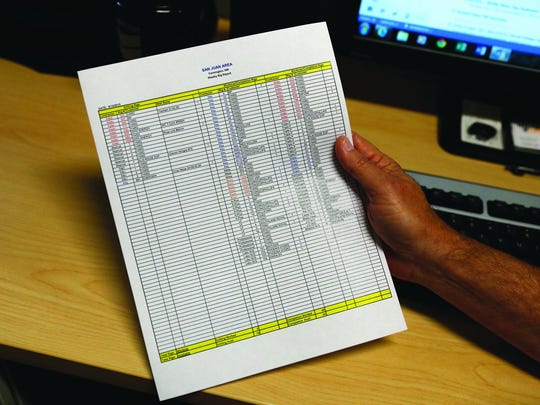 "We are drawing from our deep and long-term understanding of the area's reservoirs," said Clanton in a written statement. "Through this process, we are seeking to link innovative well-design capabilities with our subsurface expertise to enhance capital efficiency and potentially increase the number of future development opportunities across San Juan Basin."

Clanton added BP expects its 2017 activity in the basin to be greater than last year. But he said projects will depend on market conditions and the company's ability to secure timely permitting and regulatory approvals.

John Alexander is vice president and chief operating officer for Dugan Productions. He said much of the earlier decrease in drilling was the direct result of large oil and gas companies reorganizing their priorities and choosing to drill in more lucrative areas.

"The problem is that in the San Juan Basin, it takes a large amount of time to get drilling permits approved," Alexander said. "But we've heard that Encana, which has been very active in the Permian (Basin), plans to drill six wells in the San Juan Basin this year. It all depends on funding and is strictly a matter of economics."

Alexander said any increase in drilling is good news, for obvious reasons.