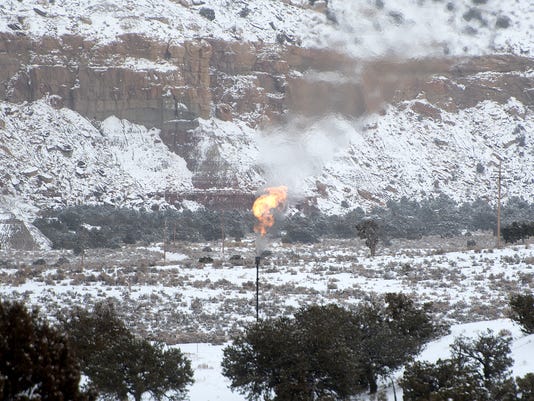 FARMINGTON – The public comment period for a proposed federal rule aimed at increasing revenues and curbing greenhouse gas emissions from the venting, flaring and leaking of natural gas from wells on federal and tribal lands has stirred considerable debate in the region.

The comment period for the rules, which drew a total of 8,349 comments online, closed Friday evening.

Seeking to catch up to oil and gas industry practices for the first time in 30 years, the U.S. Bureau of Land Management proposed the "Waste Prevention, Production Subject to Royalties, and Resource Conservation" rules in January, and published them in the Federal Register on Feb. 8.

The proposed rules seek to address the venting and flaring and leaking of methane by the industry, and ensure that greater collection of royalties from production on federal and tribal lands occurs.

The draft rules would require oil and gas operators to upgrade or enhance well facility equipment in order to reduce flaring, or the burning of natural gas. It also would require operators to periodically inspect well facility equipment for leaks, to replace or upgrade equipment that vents natural gas into the atmosphere, and to ensure venting from storage tanks is limited, and that oil and gas workers "use best practices" to limit the loss of natural gas when removing liquids from wells.

The draft regulations also aim to more accurately collect royalties from the industry from oil and gas production.

But where environmentalists and those concerned with air quality and public health see progress, the oil and gas industry — and the local and state governments that rely on revenues from oil and gas operations — see problems.

In February, a BLM hearing over the proposed rules at San Juan College drew an overflow crowd. More than 600 people largely fell into one of two positions over the draft rules — those in favor and those against.

That split appeared to be echoed in the comments in the docket at regulations.gov, where people on both sides weighed in on whether the federal government should make the oil and gas industry limit the amount of methane — a greenhouse gas about 25 times more potent than carbon dioxide — lost into the atmosphere by oil and gas operations and how the BLM might better collect royalties.

Many of the comments were general form letters written by organizations either thanking the BLM for the "common sense" rules or criticizing them, calling the rules unnecessary and devastating.

Government entities in San Juan County were uniformly united against the rules, citing the risk to city and county budgets, and increased job losses.

On Thursday, a stakeholders group of San Juan County city, county and other officials sent a joint 17-page letter, along with a collection of about 5,300 signatures of support, to the BLM and the state congressional delegation.

The letter emphasized the number of federal mineral leases that fall under the rules — about 63 percent of New Mexico’s natural gas production and 54 percent of oil production, according to the letter — as well as the potential permanent closure of 25 to 38 percent of oil and gas wells, which would cause rippling adverse impacts to the city and county in the form of job losses and fall of revenues.

"The potential loss of up to 7,500 wells represents a revenue loss of 13 percent in county oil and gas taxes on top of the 47.6 percent decline already experienced since 2009," the stakeholders' letter reads. "Furthermore, San Juan County will also incur additional losses of Gross Receipts Taxes indirectly (affected) by these regulations. These revenue losses would be further compounded by the loss of an estimated 9,000 jobs associated with the closed wells."

State Land Commissioner Aubrey Dunn said in a letter that the BLM is guilty of "overreach" by infringing on the authority of the Land Office, which collects royalties from oil and gas leases on 9 million surface acres and 13 million subsurface acres of state trust lands.

Under the proposed rules, Dunn said that the Land Office would have come up short $178 million in fiscal year 2015.

On Feb. 28, Gov. Susana Martinez wrote the BLM to request more time — 60 additional days — for the agency to receive additional comment over the rule.

"In order to obtain better information on this highly technical matter, BLM should provide an additional 60 days of comment time, for a total comment period of 120 days, to collect substantive input and ensure a truly deliberative rule-making process," Martinez wrote in her letter to BLM Director Neil Kornze.

But critics of the industry argue that petitions for more time favor the continued waste of resources and revenues.

A coalition of environmental groups, including the Western Environmental Law Center and the San Juan Citizens Alliance, said in comments that a three-month delay would lead to more waste of $82.5 million in taxpayer and tribal revenue from lost natural gas.

On March 22, the BLM gave the public two more weeks to comment over the rules.

Like many of the comments opposing the implementation of the proposed rules, Martinez emphasized the state's budget woes.

Martinez said that New Mexico — already suffering budget shortfalls from stalled production activity caused by the ongoing slump of natural gas prices and more recent precipitous fall of crude oil prices on the commodities market — would be placed at even greater risk if the rules are finalized.

"There is also the potential for significant adverse impacts on state revenues," she wrote in her letter. "Preliminary estimates indicate compliance with this rule will render as much as 10 percent of New Mexico's production uneconomic. Not only will this lead to a costly, unnecessary, and premature plugging program, my state stands to lose hundreds of millions in royalties because of premature well closures. We can ill afford the additional downward pressure this proposal will have on state revenues."

But a failure to tighten controls over oil and gas operations on federal and tribal lands to curb methane emissions will only lead to increased greenhouse gases, and waste more resources, critics and the Obama administration say.

Between 2009 and 2014, oil and gas producers on public and Indian lands vented, flared and leaked about 375 billion cubic feet of natural gas, enough to supply about 5.1 million households for a year, according to the BLM.