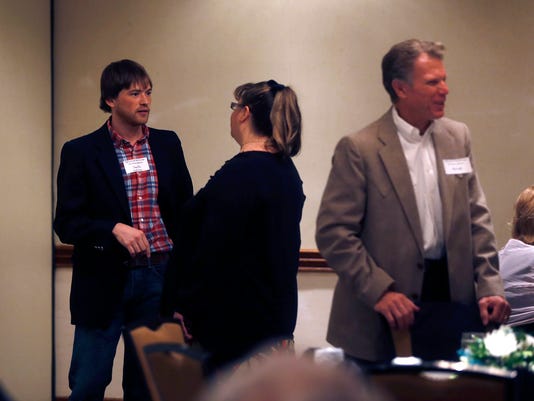 Speaker Isaac Orr, left, mingles with members of the audience Thursday before the start of the Desk and Derrick Club of Farmington's 2015 Industry Appreciation Dinner at the Courtyard by Marriott in Farmington.(Photo: Jon Austria/The Daily Times)Buy Photo

FARMINGTON — Leaders in the oil and gas industry got a crash course Thursday night in learning how to effectively talk fracking with the general public by a millennial and former stand-up comic.

Isaac Orr — now a research fellow with The Heartland Institute, a Chicago-based conservative and libertarian public policy think tank — delivered a speech on how to navigate serious issues surrounding the industry. It was a presentation that would have been right at home in a comedy club.

"I love New Mexico. I've only been through a few times, and, unfortunately, most of what I know about it is from 'Breaking Bad,'" Orr told the guests.

The forum for Orr's humor was the annual industry appreciation dinner for the Desk and Derrick Club of Farmington, now in its 64th year. The event was held at the Courtyard by Marriott. The women-led oil and gas industry group holds its annual dinner to celebrate a person who has made significant contributions to the energy industry, but the banquet dinner event this year was conducted on a smaller scale and located at a more affordable venue, according to Jo Webber, Desk and Derrick secretary.

The group, which usually holds lunch meetings and field trips each month through the year, struggled to organize a committee last year and skipped the event, Webber said. Previous appreciation dinners were held at the club room at the San Juan Country Club.

Webber said the humorous atmosphere was a welcome relief.

"There's hardly anybody drilling now," Webber said. "Everything's moving out, so it's been hard to keep people around. The economy's worse this year (because of the slump in oil prices)."

Orr, 27, from Green Bay, Wis., casually addressed the gathering of about 70 guests in the ballroom as "guys" and deployed Norman Vincent Peale-isms like "People don't care what you know until they know that you care."

He offered quick primers on body language and the use of metaphors, peer-to-peer sharing of information,and visual aids when communicating to people with "opposing or uninformed" opinions about the extractive energy industry, popularly known by the single word "fracking." 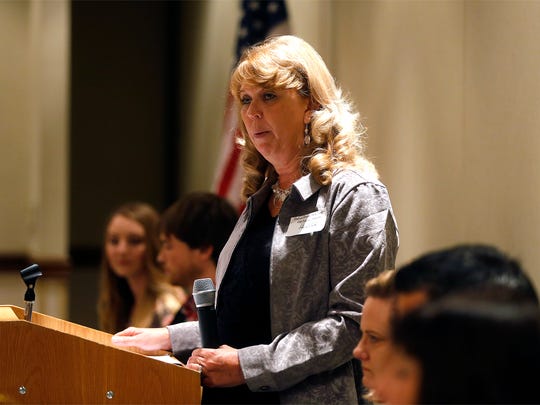 Orr cited a scene in which a man lights his tap water on fire in the 2010 anti-hydraulic fracturing documentary movie "Gasland" as an example of the power of the visual image over the truth.

"(The scene) is easily the most important, influential scene in anything that's been done on fracking to date," Orr said. "So what I like to do is explain to people why this happens. So the guy (in the film) drilled his water well through a coal bed, and that's a natural source of methane, so regardless if fracking had never been invented or not, this guy was going to have contamination."

Orr said trying to change minds over the industry is frustrating, but can also be like a game.

"Part of this is promoting how great oil and gas is, and part of this is playing whack-a-mole with every single complaint that people have when it comes to environmental impacts," he said. "So, that's kind of my job, to play whack-a-mole. It's frustrating. I kind of have tennis elbow now. But it's also really rewarding when you see people start to catch on."

"You have to appeal to the rational middle," he said. "What I like to tell people is, shale is a lot like bubble wrap. So the oil and gas is trapped in there, and you have to pop it to have fun because who doesn't love bubble wrap for that reason."

Orr's speech was titled "How to succeed in talking to normal folks about fracking without really trying."

He told guests one of his go-to ways to talk about oil and gas production amid the pressure from low oil prices and lawsuits against the industry by environmental groups is with pictures. 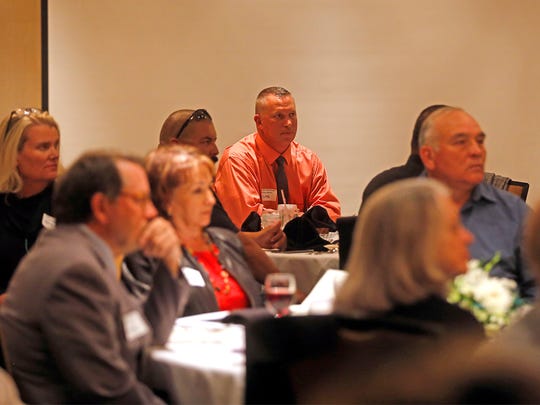 "So, one of the things I want to do at some point in the future is, I want to write a book that's almost all pictures and the title will be 'Friends Don't Let Friends Ban Fracking,'" he said to laughs and applause.

Rod Seale, a petroleum engineer who lives in Farmington, said Orr's humor made him memorable, but his ability to portray the industry in an engaging way impressed him.

"I liked his ability to communicate. The body language, the emotions versus the science," Seale said. "The topics he presented were scientific, but the way he talked about them wasn't scary."