The proposed Holtec International site would store up to 100,000 metric tons of spent nuclear fuel rods near the Eddy-Lea county line in New Mexico. 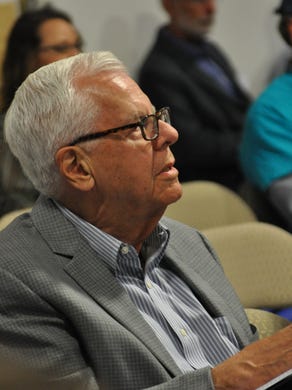 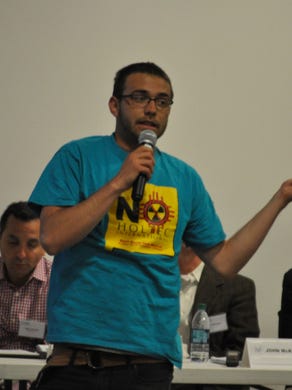 An anti-nuclear "activist" turns his back to representatives of the Nuclear Regulatory Commission May 3 during a scoping meeting on a proposed nuclear storage facility in Eddy and Lea counties. Jessica Onsurez Current-Argus
Fullscreen

Rose Gardener of Eunice who represents Alliance for Environmental Strategies holds a flag May 3 during a scoping meeting hosted by the Nuclear Regulatory Commission. Jessica Onsurez Current-Argus
Fullscreen

A representative of the Nuclear Regulatory Commission speaks May 3 to dozens who gathered to participate in a public scoping meeting in Carlsbad, N.M. Jessica Onsurez Current-Argus
Fullscreen 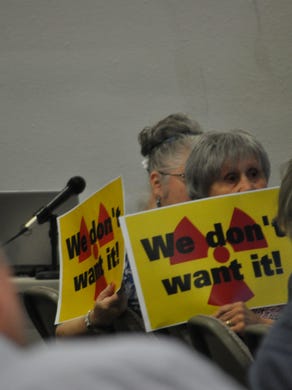 Signs stating "We don't want it" were displayed by those in opposition to a proposed spent nuclear fuel rod storage facility near Carlsbad, N.M. Jessica Onsurez Current-Argus
Fullscreen

Don Hancock asks representatives of the Nuclear Regulatory Commission to consider the repercussion of allowing the construction of a spent nuclear fuel rod interim storage facility near Carlsbad, N.M. during a scoping meeting May 3. Jessica Onsurez Current-Argus
Fullscreen 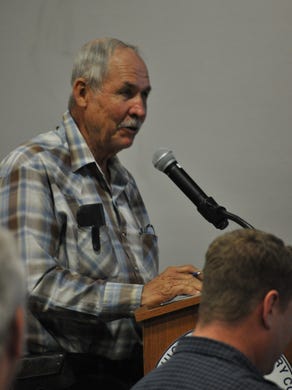 Karen Hadden, executive director of the Sustainable Energy and Economic Development Coalition speaks in opposition during a scoping meeting hosted by the Nuclear Regulatory Commission May 3 in Carlsbad, N.M. The NRC is considering an application by Holtect to construct a Consolidated Interim Storage Facility to hold spent nuclear fuel rods. Jessica Onsurez Current-Argus
Fullscreen 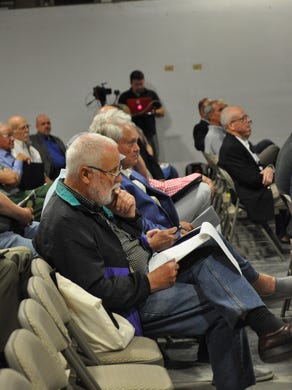 Joy Russell, Vice President of Corporate Business Development for Holtec International speaks to the public about Holtec's commitment to being a steward of the environment May 3, during a scoping meeting held by the Nuclear Regulatory Commission in Carlsbad, N.M. Jessica Onsurez Current-Argus
Fullscreen 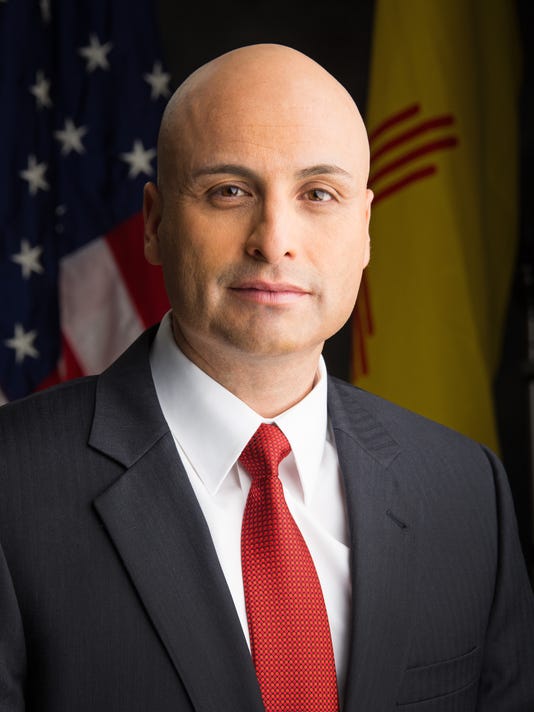 New Mexico Attorney General Hector Balderas said the State of New Mexico has limited recourse if it were to oppose federal licensure of a proposed interim storage facility for spent nuclear fuel.

The site, proposed by Holtec International, would see up to 100,000 metric tons of spent nuclear fuel rods from generator sites across the country held temporarily near the Eddy-Lea county line.

The site was expected to begin accepting shipments by 2022.

The company applied to license the facility through the federal Nuclear Regulatory Commission in 2017, and the application was accepted a year later, beginning a public scoping process that will see the NRC draft an environmental impact statement which could ultimately lead to the issuance of a federal license.

During the federal process, a bicameral group of New Mexico lawmakers formed the Radioactive and Hazardous Materials Committee.

Chair of the committee State Sen. Jeff Steinborn (D-36) submitted a list of 57 questions to various state departments last month, but most deferred to the NRC.

Six out of 57 questions answered

The federal government is the sole agency to regulate the sites “before the fact,” Balderas said, but states can “indirectly” regulate them after they go into operation.

More: Opposition rallies ahead of public hearing on Holtec site

“While it is abundantly clear that the state cannot license or otherwise directly regulate interim storage facilities, the Supreme Court has repeatedly held that state tort law can provide a remedy for injuries suffered as a result of nuclear plant operation.”

The NWPA, records show, specifically directed The Department of Energy to devise a permanent repository for nuclear waste. 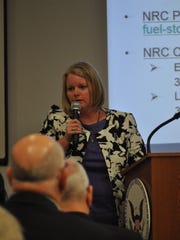 Joy Russell, Vice President of Corporate Business Development for Holtec International speaks to the public about Holtec's commitment to being a steward of the environment May 3, during a scoping meeting held by the Nuclear Regulatory Commission in Carlsbad, N.M. (Photo: Jessica Onsurez Current-Argus)

An amendment in 2008 named Yucca Mountain in Nevada as the location, and directed Congress to focus on that area for the site.

But the project stalled after opposition from Nevada state lawmakers, and budget cuts by the administration of former-President Barack Obama.

The DOE withdrew its application in 2010.

In a recent budget proposal, President Donald Trump provided funding and called for the project to be resumed.

Meanwhile, the NRC does have the right to license “privately-owned, away-from-reactor” storage facilities, to temporarily hold the waste in the absence of a permanent repository, Balderas wrote, despite opposition from host states.

In 2003, a lawsuit stemming from a similar proposed storage site in Bullcreek, Utah, affirmed the NRC’s right to issue licenses for temporary storage away from generator sites.

Utah lawmakers argued the NWPA removed the NRC’s legal authority to license such a site by calling for the Yucca Mountain project.

In its final opinion, the the Court of Appeals for the District of Columbia validated the Utah lawmakers’ environmental and safety concerns, but admitted that the federal government alone has the final say on nuclear.

Following the Bullcreek decision, the Court of Appeals in the 10th Circuit issued another opinion in Skull Valley Band of Goshute Indians v. Nielson, also addressing a state government’s rights regarding such facilities.

The case also centered around the proposed Bullcreek facility, but instead argued that Utah’s state constitution demanded any nuclear facility be regulated through Utah’s Department of Environmental Quality, and state legislation called for county-level oversight on railroad transportation and the facility itself.

This argument was also defeated in court, as the 10th Circuit determined federal law preempted the state’s.

“In holding the Utah statutes preempted, we do not denigrate the serious concerns of Utah’s citizens and lawmakers regarding spent nuclear fuel, a matter with presents complex technological, economic and political challenges to those seeking effective solutions,” read the decision.

“However, in the matter of nuclear safety, Congress has determined that it is the federal government, not the states that must address the problem.”

Balderas wrote that these decisions created legal precedence that gave the NRC authority to issue licenses for the facilities, while also precluding the states from almost any involvement.

What if something goes wrong?

The State would have some recourse, Balderas said, if NRC regulations were violated, or if the facility itself failed once in operation.

While the site is in operations, Balderas argued Holtec would be solely liable for the safety of the storage casks holding the spent fuel about 30 feet underground.

Storing the canisters beyond their lifespan is not addressed in NRC regulations or judicial precedence, he wrote, but Holtec alone is responsible for safe operation.

"It stands to reason, however, that because Holtec would be the owner of the site, it would be liable for the waste stored there and its compliance with NRC regulations,” Balderas wrote.

Those regulations also specifically call for a decommissioning plan of any interim storage site, preventing the waste from staying there permanently.

That final decommissioning plan, he wrote, must be submitted – with financial assurances – once a licensee ceases operations at the site.

Such assurances must be maintained throughout the license, with Holtec continuing to update the anticipated costs of shutting down.

“The NRC’s licensing and regulatory requirements should provide some assurance that Holtec would be unable to simply abandon the site, given the that the NRC requires financial assurances to cover the cost of decommissioning the site,” Balderas wrote.

To a question from Steinborn about the state’s recourse if a permanent repository is not created by the federal government, Balderas said there was nothing the state could do.

“The simple answer is that federal law does not appear to afford the state any legal recourse,” Balderas wrote.

And no matter how long it takes for a permanent repository to be opened, Balderas said the State of New Mexico has no legal rights to force the federal government to do so.

“The federal government does have a duty to establish a permanent repository at Yucca Mountain, but as a result of political uncertainty and a lack of real progress over the years, there is simply no telling when Yucca Mountain or some other permanent facility will be constructed,” he wrote.

“Unlike nuclear utilities, New Mexico does not itself appear to have any legal recourse in federal law to obtain damages or force the federal government to open such a facility.”