Federal documents indicate some progress is being made in the handling of backlogged onshore drilling lease permits on public lands.

Agency still unable to report how many permits are in backlog

The Farmington Field Office of the Bureau of Land Management, seen in this 2012 file photo, was home to many backlogged drilling permit applications as of January 2017. New numbers have not been released on how many are still in the pipeline.(Photo: Daily Times file photo)

FARMINGTON — Federal documents indicate some progress was made during 2017 in the handling of backlogged onshore drilling lease permits on public lands. But hard figures on how many permits are still in the backlog this year are not available yet from the source of the backup, the U.S. Bureau of Land Management.

The BLM's 2018 budget documents call for more cash to go into streamlining the permit process. The agency cites improvements in its automated processes and work with applicants to increase the quality of submitted applications as reasons things will improve.

"Within the Oil & Gas Management program, the Bureau requests an increase of $16 million to help ensure BLM has sufficient administrative and staff capacity to quickly process Applications for Permits to Drill (APDs) and Expressions of Interest (EOIs) in leasing, and to help alleviate administrative burdens in processing rights-of way (ROWs) requests for critical infrastructure needs in support of increased energy development," the BLM's Budget Justifications and Performance Information Fiscal Year 2018 document states.

"The BLM has worked with operators to improve the quality and completeness of submitted drilling permit applications," the document stated. "The new automated system, AFMSS 2, should facilitate submittal of more complete APDs, and aid in improving the BLM review process. A reduction from the current processing time of 100 days is expected after the new module is fully implemented."

That $16 million request is pending action that would have to happen when the U.S. House and Senate move to avoid a government shutdown.

That bill must pass before next Friday ends, or there will be another government shutdown. 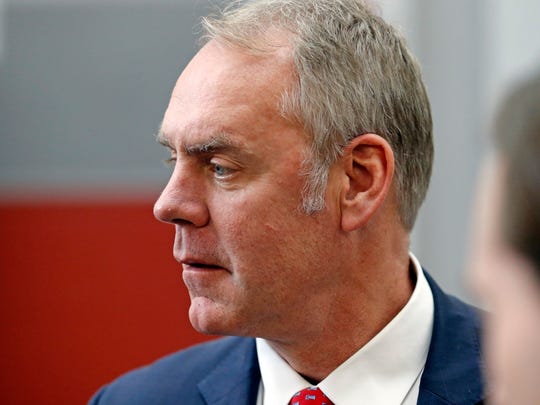 The Trump administration’s permit process reform push began with a July 2017 secretarial order by Secretary of the Interior Ryan Zinke to speed a process that could keep onshore drilling permits in limbo for hundreds of days. Zinke issued subsequent orders aimed at reforming the process.

The BLM last year beefed up hiring in its permit processing division, reducing permit processing times for drilling applications, according to a Department of the Interior document related to an October 2017 report.

In January 2017, “there were 92 vacancies in key positions related to the (BLM) permitting process. Since that time this administration has filled nearly half of those positions,” DOI stated while releasing its "Review of the Department of the Interior Actions that Potentially Burden Domestic Energy" report in October. “The BLM is also modernizing the software used to track and coordinate permitting while seeking to add regional teams that will be able to greatly streamline the permitting process. So far this year the BLM has decreased their processing time for APDs by an average of 46 days.”

New Mexico Oil and Gas Association spokesman Robert McEntyre said in early March that association members have reported a new attitude from and better experiences with personnel associated with the process, but he’s also heard BLM trot out numbers about processing speedups before when it wasn’t true.

“We still have producers who are waiting 100 days or more,” McEntyre said, but there has been recognition of attempts to improve software. He said one way to define BLM’s progress might be for NMOGA to survey its members about wait times, as the association did in the recent past.

“I don’t think there’s a silver bullet,” McEntyre said of reforming the BLM’s processes. “I don’t think it can happen overnight.”

As of January 2017, DOI records showed, there were 2,802 drilling permits pending in several BLM offices, 152 of them in the Farmington office. Although statute requires a 30-day review process, DOI in July 2017 noted that the average time to review a permit was 257 days.

More: Deficit could hit $1 trillion in 2018, and that's before the full impact of tax cuts

A chart in BLM's 2018 budget justifications shows that BLM started 2017 with 2,552 pending permits and that number grew to a total of 5,303 applications by the end of the year.

Of the 3,000 applications processed during 2017, 2,751 were approved. That left 2,303 applications pending by the end of 2017. Projections for next year indicate BLM expects more permit applications.

BLM also expects to start with more applications in the pipeline but have fewer still pending by the end of 2018 compared to 2017.

New committee on the job

The executive committee formed by order of Zinke was created to review energy-related permitting policies. It is charged with suggesting ways to expedite the process, but no official progress reports have been released.

A request to DOI by The Daily Times for information about the committee's work and its progress was unanswered by March 16.

Zinke established the executive committee on Oct. 25, 2017, via Secretarial Order 3358. That order created the Executive Committee for Expedited Permitting at Interior. It was announced also as part of the secretary’s October energy burdens report, which details Trump administration plans to increase energy independence and change the mindset and priorities of federal regulators.

The DOI stated the committee’s members include “the Deputy Secretary and Assistant Secretarial leadership from across the Department, with the charge to improve Interior’s energy permitting in service to the American public and Indian Country.”

“The long period from when acreage is first nominated to when those acres are offered at a lease sale, as well as delays between the lease sale date and when leases are awarded reduces industry certainty and hinders states from receiving their share of lease sale revenues,” the DOI stated. “These delays have rendered industry less able to plan for and execute exploration and production strategies in a timely fashion, and less able to respond effectively to changing market conditions.”

More: The shutdown clock is still ticking and that causes chaos throughout the government

The committee was one of many bullet items in a long list of moves that include opening up lands, including a controversial wildlife preserve in Alaska, to drilling, opening up vast swaths of the continental shelf to exploratory wells, and eliminating an Obama-era rule regulating the venting and flaring of methane by oil and gas rigs.

“Developing our energy resources to grow our economy and protecting the environment are not mutually exclusive,” Zinke said in October of his reforms. “However, while conducting the review outlined in the Executive Order, we found that several costly and burdensome regulations from the past threaten that balance by hampering the production or transmission of our domestic energy.”

Capitol Hill staffers wheel the budget into a room for the media in the Longworth House Office Building in Washington. JIM LO SCALZO, EPA-EFE
Fullscreen

Copies of the budget sit on a table at the House Budget Committee on Capitol Hill in Washington. SAUL LOEB, AFP/Getty Images
Fullscreen

U.S. Sen. David Perdue, R-Ga. holds a copy of the budget as Sen. Joni Ernst, R-Iowa looks on prior to a news conference on immigration at the Capitol in Washington. ALEX WONG, Getty Images
Fullscreen