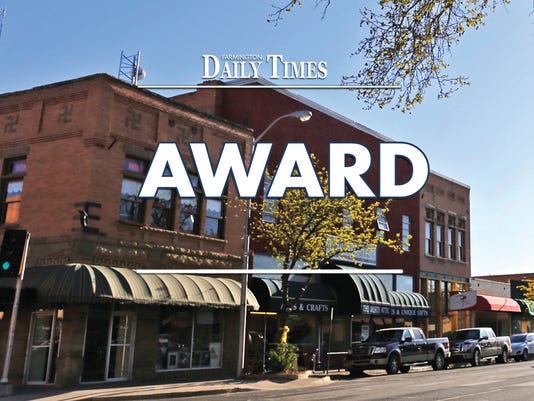 The Daily Times earned a first-place citation for breaking news coverage in the immediate aftermath of the fatal shootings Dec. 7 at Aztec High School.

“The presentation of the story reflects careful thought about the impact of the material,” the judging panel wrote. “The prominent display of the shooter's "to do list" and interviews with students at the school made for a particularly powerful story.”

The award went to the staff of The Daily Times and The Arizona Republic reporter Kaila White.

“This was not a story we thought we’d ever have to cover here,” Editor John R. Moses said. “The events of Dec. 7 directly affected many in our company and community. Our staff strove to be informative and respectful, and to release only accurate and helpful information to counter the rumors that were rampant in the first hours of the crisis.”

Moses said he hopes the paper’s continuing coverage helps to document the ongoing work being done to improve campus safety and staff and student emergency training at Aztec and other schools throughout San Juan County.

Publisher Sammy Lopez and some of his staff had rushed to assist the news team on Dec, 7, monitoring police scanner traffic and phones and helping with other duties in the first hour while the news team deployed.

“I am proud of the work our news team did after the fatal shootings,” Lopez said Wednesday. “They checked the facts and made sure our stories were accurate. They also showed compassion when dealing with the victims’ families, students and first responders.”

The Las Cruces Sun-News, a sister paper to The Daily Times, earned two first-place citations. In the public service/watchdog journalism category, Las Cruces won for its examination of how New Mexico's inadequate mental health system has failed its residents and burdened its communities.

Judges said staffers Carlos Andres Lopez and Diana Alba Soular “distilled a complex issue into a series of insightful articles that make it impossible for the reader to ignore …the reporters exposed the state's broken mental health system from multiple angles and in many voices.”

Judges said Las Cruces photographer Robin Zielinski won a first place for use of video for Zielinski's unflinching look at how the mental health services crisis in New Mexico leads to the justifiable shooting of Juan Gabriel Torres and the impact of his death on his family.

“Through bleak police body camera footage, eyewitness video and conversations with family, Zielinksi humanized a crisis and showed how New Mexico's challenge in responding to this crisis affects the public at large,” the judging panel said. “Opening with the final seconds of Torres' life rendered a complicated problem as an immediate and visceral concern.”

In the largest contest division, The Arizona Republic in Phoenix had the most citations, earning seven. Two were for first place.

The project examined the 2,000-mile U.S.-Mexico border, looking at the challenges and consequences of building such a wall.