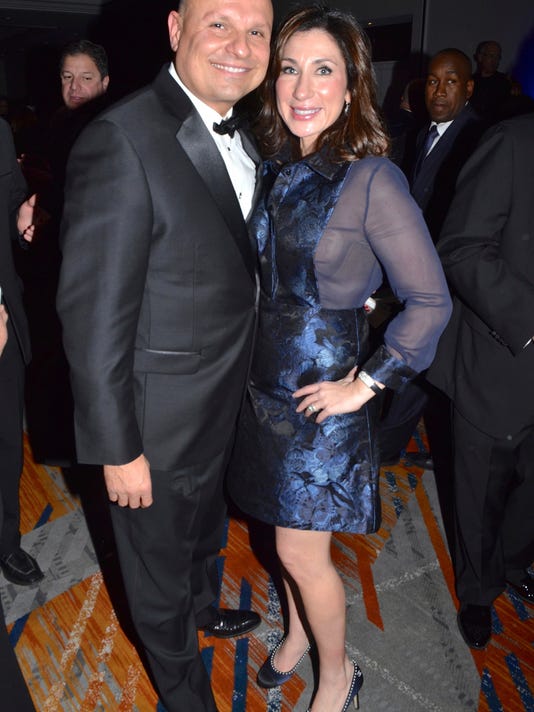 This undated photo provided by R. Couri Hay Creative Public Relation shows Marianne Bertuna, right and Arthur Aidala. Bertuna was an intern and then an associate in Aidala’s small New York law firm, starting in 1997. Aidala was attracted to her, but told himself, “This is a work person and nothing is going to happen.” The couple got married in 2016(Photo: Patrick McMullan, AP)

NEW YORK — It happens in so many workplaces — two colleagues begin a romantic relationship. But a heightened awareness about sexual harassment means small business owners can get more anxious when employees start dating.
Many owners have consulted with employment attorneys or human resources professionals since the accusations against movie executive Harvey Weinstein in November. Some owners have created or updated their policies on dating and sexual harassment, and they're making sure staffers know the rules and to speak up if they feel harassed.
Bosses who in the past just watched with interest as a relationship blossomed are being proactive, telling couples that if the romance sours, both people are expected to behave appropriately. And some owners are even asking couples to sign statements acknowledging that their relationship is consensual.
Sammy Musovic has seen many romances — and breakups — at his three Manhattan restaurants. After the reports about Weinstein and others, Musovic consulted with an attorney to understand what his legal liability could be if an employee relationship led to harassment charges. He decided against changing his policy that allows dating, but he's keeping a closer eye on interactions between employees.
"When I know staffers are dating, I speak to each of them in private and just try to understand the situation," says Musovic, who owns Sojourn, Vero Bar and Selena Rosa.
A few years ago, a manager at one of his restaurants dated a hostess, and became jealous when he saw her chatting with customers.
"I told them, 'You guys have to stop this or someone's going to have to find another job,'" Musovic recalls. The manager quit. On another occasion, Musovic fired an employee who wrote unwanted love letters to a co-worker.
Jacqueline Breslin, an executive with HR provider TriNet, is fielding more questions from businesses that want to know how to handle employees dating. The first step is often to determine whether companies have policies on dating and sexual harassment; if not, they need to be written.
Dating policies should set expectations for staffers' behavior, such as that emotions should not be displayed at work. Policies must also address issues like relationships between supervisors and subordinates. Some owners might be tempted to ban employee relationships altogether. But people attracted to one another may still date on the sly. And strict policies can backfire — talented employees may choose love over a job and leave.
Problems can also arise when employees want to date clients or vendors. Those relationships have the potential for conflicts-of-interest as well as harassment issues. Ashley Hunter's dating policy rules out relationships between her eight staffers and vendors of HM Risk Group, an insurance company based in Austin, Texas.
"If you're in a billion-dollar business, you can weather those problems, but I can't," she says.
Hunter is especially sensitive to issues around dating co-workers, having been in a romantic relationship with her chief financial officer for three years. He's worked at the company for nine months, and everyone at the company knows of their relationship.
One option for owners is to have dating staffers sign what's called a relationship contract, stating they're in a consensual relationship and that they've read and will abide by the company's written policy on sexual harassment.
Kate and Doug Hickey had two employees at Honolulu-based coffee grower Sunshower Farms — a supervisor and subordinate — who began a relationship in 2013. They had the couple sign a contract saying if the relationship ended and they couldn't work together comfortably, one would have to resign.
"We did this mainly to protect ourselves" in the event of a breakup, says Kate Hickey, who was an attorney and drafted the contract. The couple eventually married and moved away. If a similar situation arises again, Hickey says she would probably consult an attorney who has more expertise about sexual harassment and draft a "more detailed" contract.
Many bosses may not even be aware of a relationship until someone mentions it. HR professionals say an owner should approach the couple, discuss the situation, and if the company requires a relationship contract, have them sign it. More complicated is when an owner suspects there's an attraction or budding relationship — when's the right time to step in? There's no one answer, but a boss should certainly talk to the employees when it's clear there's a romantic connection.
A greater concern is what to do if the romance ends. As long as there's no sign of a problem, the boss should respect everyone's privacy. But if one person keeps pursuing another, an owner needs to be on alert.
"The person who's repeatedly asking for an unwanted date needs to be told, 'This is against company policy and we don't tolerate this kind of harassment,'" says Michael Schmidt, an employment attorney with Cozen O'Connor in New York.
Even if unwanted contacts take place off the company's premises or on social media, a boss needs to intervene, Schmidt says. Businesses can be liable if they don't address potential harassment because employees might feel they're in a hostile working environment, Schmidt says.
Even business owners who have been part of workplace romances say they're warier now.
Marianne Bertuna was an intern and then an associate in Arthur Aidala's small New York law firm, starting in 1997. Aidala was attracted to her, but told himself, "This is a work person and nothing is going to happen." He married someone else.
Meanwhile, two attorneys who were dating joined the firm and eventually married. But now, Aidala says that if any employees start a relationship, he would tell them, "You need to proceed with caution because there are a lot of lives on the line here."
And Aidala himself? He got divorced, and he and Bertuna became a couple. In 2016, they got married.
Follow Joyce Rosenberg at www.twitter.com/JoyceMRosenberg.