The bullish momentum for global clean energy investment, which rose 3 percent to $333.5 billion in 2017, will continue this year. 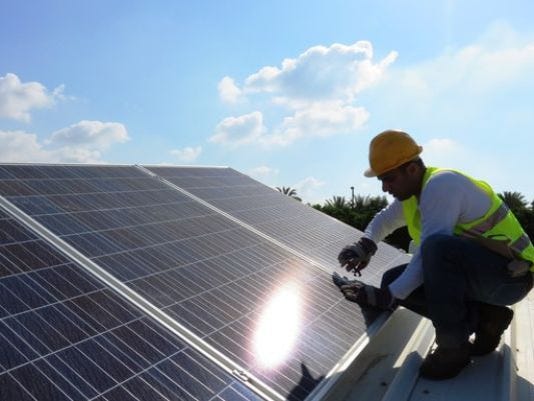 A worker installs solar system on a roof in this undated photo.(Photo: Getty Images)

The bullish momentum for global clean energy investment, which rose 3 percent to $333.5 billion in 2017, will continue this year.
There was significant progress in the transition to cleaner energy in 2017, and 2018 should see more of the same. New solar installations will top 100 GW this year, with China likely to make up about half of that total, according to a new report from Bloomberg New Energy Finance (BNEF), which lays out some key predictions for 2018.
However, beginning this year, BNEF says that new countries will become relevant in the race for clean energy, including sizable solar installations slated for Latin America, Southeast Asia, the Middle East and Africa.
Falling costs and proliferating installations of wind and solar are underpinning the sector’s growth. At the same time, cheaper inputs mean that developers can get more gigawatts of clean energy per dollar invested, which explains why the headline investment figure appears to not be growing by all that much.
There were some eye-popping figures and notable progress for new renewable energy projects in 2017. For instance, the tariffs for some onshore wind projects in Mexico dropped to a whopping $18.60 per MWh, a price that “would have been unthinkable only two or three years ago,” Angus McCrone, Chief Editor at Bloomberg New Energy Finance, wrote in the report.
Meanwhile, the cost of lithium-ion batteries plunged by an additional 24% last year, which raises the odds that by the mid-to-late 2020s, EVs could beat out conventional gasoline and diesel-powered vehicles not just on the lifetime cost, but even on upfront cost.
Battery costs will continue to decline this year, but at a slower rate than in the past. Soaring prices for cobalt and lithium carbonate will offset some of the declines in cost, to be sure, but BNEF still sees the average cost of battery packs falling by an additional 10 percent to 15 percent. Economies of scale, larger average battery pack size, and an additional 5 percent to 7 percent improvement in energy density will continue to boost the economics of batteries, BNEF argues.
EV sales will hit 1.5 million units in 2018, and again, China will lead the way with more than half of that total.
The recent rally in oil prices (and somewhat for gas) will aid in the transition to cleaner energy, making wind, solar and EVs more competitive.
It isn’t all clear skies for clean energy, however, as there are some pitfalls on the horizon. Geopolitical surprises could run headlong into the aggressive bull rally in global stock markets, leading to a selloff. BNEF says that a war in the Middle East, or on the Korean peninsula, or even political turmoil in the U.S., could upset financial markets, which would spell trouble for clean energy.
On top of that, the ongoing withdrawal of monetary stimulus from the U.S., Europe and Japan could raise interest rates, raising the cost of capital and hurting the economics for clean energy, which is an industry characterized by low operating costs, but high capital costs.