On Titan, the largest of Saturn’s 62 moons, hydrocarbons rain down from the skies and collect in the form of vast lakes and dunes. 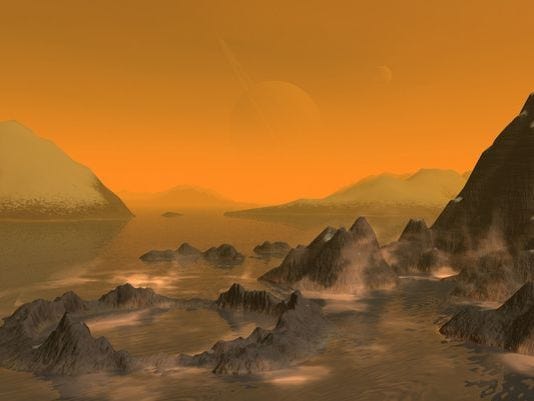 In this artist's rendering of Titan, methane vapors are seen around an ancient crater and nearby rocky cliffs. In the distance, mountains of rock and ice rise from a sea of ethanol. Barely visible through the thick orange atmosphere are Saturn and another of her moons, Rhea.(Photo: Stan Richard, NASA/JPL)

Imagine a place with hundreds of times more natural gases and other liquid hydrocarbons than all of the known oil and gas reserves on our bountiful planet. As it turns out, that place is a comparatively small, smoggy and perpetually drizzly moon in our very own solar system, happily orbiting around Saturn.

On Titan, the largest of Saturn’s 62 moons, hydrocarbons naturally rain down from the skies in a “dreary drizzle” and collect in the form of vast lakes and dunes. This has long been known or at least surmised, but now we have proof and quantitative data thanks to NASA’s Cassini spacecraft.

Whereas the majority of the earth’s surface is covered in water, the greater part of Titan is covered in lakes, seas, and flooded river valleys full of liquid methane and ethane, while the dunes are made up of not sand, but likely of tholins, a category of organic materials formed by carbon-containing compounds (CO2, methane, ethane, and more) and solar ultraviolet irradiation or other cosmic rays. These materials do not form naturally on earth, but they’re carbon-rich treasure troves of carbon-based organic matter that can explode into prebiotic life in the presence of water. In fact, tholins likely played a role in the origin of life on Earth.

Scientists can surmise the depth and volume of Titan’s lakes based on their pitch-black appearance on radar and by comparing with depth averages exported from our own planets statistics. These observations are based on findings in the northern polar regions of Saturn’s largest moon.

Cassini has only viewed the southern reaches of Titan once with their radar technology, but few lakes were immediately visible.
NASA’s Cassini spacecraft disintegrated in the skies above Saturn in a final, fateful blaze of cosmic glory, following a remarkable journey of 20 years — but not before a hilarious opera send-off by Robert Picardo.

NASA’s Cassini craft has used radar to map about 20 percent of Titan’s carbon-rich surface. Just within this fraction of the moon’s surface, NASA has been able to observe hundreds of lakes and seas, several dozen of which are estimated to contain more liquid hydrocarbons than all of Earth's oil and gas reserves combined in each lake in and of itself. And those tholin-filled dunes? Those likely contain enough carbon-based organics to amount to hundreds of times the quantity of the Earth’s dwindling coal reserves.

These numbers are pretty astounding, especially when you consider that Earth’s natural gas reserves, dwarfed by Titan’s, are not too shabby either. On our humble planet there are proven reserves totally 130 billion tons, enough to provide 300 times the amount of energy the entire United States uses annually for residential heating, cooling and lighting. But this is nothing compared to what we’re seeing on Titan — dozens of Titans’ hundreds if not thousands of lakes each individually contain at least this much energy potential, all pooled, cooled, and ready in the form of liquid ethane and methane.
What Titan lacks in oxygen it makes up for in a swirling orange chemical haze surmised to be just one element (that would be sulfur) short of crude oil. So now the question is —​ ​​​​​​is all that potential energy something that we’ll be able to harness before our own supplies begin to run dry? Is it worth battling the freakishly cold temperatures of Titan’s unprecedented polar vortex, thick clouds of noxious chemicals and, well, getting all the way to Saturn?

Only time will tell. But in the meantime, scientists will be looking closely at all the readings coming out of the Cassini spacecraft, as it continues to provide surprising revelations about our own carbon-based existence, not the least of which is the moon’s very own model of climate change. Methane is one of the Earth’s most potent greenhouse gases, and watching the impacts of such a methane-heavy atmosphere on Titan could teach us a whole lot about living in a world with changing temperatures and a growing dependence on natural gases.