Four Corners business and industry leaders are gathered today to discuss the future of the region during a two-day “Four Corners Future Forum."

Keynote speakers, local leaders say plans need to include everybody

FARMINGTON — Four Corners business and industry leaders heard today from a pair of Minnesota business leaders who have been tasked with helping to revive the economy in an economically depressed region of that state during a business forum at San Juan College.

The presentation by keynote speakers Cheryal Lee Hills and Arlene Jones was part of the two-day Four Corners Future Forum at the college. More than 130 people attended the event presented by the Four Corners Regional Economic Consortium.

The event, which began today, focuses on specific themes, including agriculture, art and culture, energy, health, infrastructure, manufacturing, technology and tourism. It features a number of presenters and forums on those topics in the hopes of creating a plan for the region’s economy that is less dependent on fossil fuels.

Hills and Jones discussed the successes they’ve seen as part of the Region 5 Development Commission in Minnesota. The commission was established to enhance the vitality and quality of life in five counties in that state after major changes took place in the region’s economy as a result of the 2008 recession, including a large migration out of the region and the opioid crises, Hills said.

Though their work so far has largely focused on community agricultural programs, the process of creating an economically resilient region will be similar for the Four Corners, Hills said. The most important component is people — not only the need to recruit committed “champions” for different themes, but also to include diverse voices when it comes to “who’s at the table and who carries the load,” she said.

“We gave real consideration in how we live up to our dreams of inclusion. Remember when I said quality of life for all people?” Hills said, referring to a priority she mentioned earlier in today's keynote speech. “Well, we ... meant that. That meant poor, that meant communities of color, that meant rich people — it meant everybody.”

The social component of the Region 5 Development Commission is the glue that held its efforts together and serves as an important factor in measuring its success, Jones said. 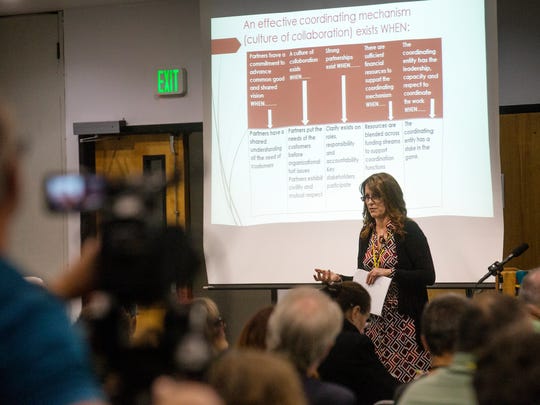 “The importance of measuring impact and outcomes and success in your efforts has to be greater than the financial impact, how many pounds of food you’re moving and other normal, everyday measurements,” Jones said. “We want to measure our social cohesion. We want to measure how we’re getting our young folks on board in our communities, how we’re getting our young millennials engaged in political action throughout our region.”

Local participants also emphasized the importance of working together as the region starts the effort to redefine its economy, including Jeff Kiely, executive director of Northwest New Mexico Council of Governments, who helped organize the event.

“Welcome to the first day of the rest of our lives in this beautiful place we call Four Corners,” Kiely said during today's opening remarks. “I say that because we’re in the midst of some tough and uncertain economic times, and because we’re all in this together, and because we’re banding together to envision a new and prosperous future for this region. We’re here because together we’re smarter, we’re stronger and we’re more competitive — not against each other, but in the global marketplace — if we band together.”

“Remember when I said quality of life for all people? ...That meant poor, that meant communities of color, that meant rich people — it meant everybody.”

Several speakers at the event also noted the importance of being proactive and prepared to respond to worst-case scenarios, as well as the need for businesses and governments to work across county, state and tribal lines for the benefit of the regional economy.

The 138 participants in this week’s conference broke into small group brainstorming sessions, and participated in forums and facilitated discussions with the goal of identifying key players and potential projects to begin planning.

Warren Unsicker, executive director of Four Corners Economic Development, said the consortium has two more events tentatively planned for the coming months. One is designed to include federal agencies in the region's plans and identifying sources of federal funding. The second event is designed to solicit public feedback and input on potential projects.

Arlene Jones of the Region 5 Development Commission in Minnesota makes a point during her presentation at the Four Corners Future Forum Wednesday at San Juan College in Farmington. (Photo: Jon Austria/The Daily Times)