Greg Forse, owner of Forse Beard Co., poses for a portrait, on Wednesday at his home in Bloomfield.(Photo: Jon Austria/The Daily Times)Buy Photo

FARMINGTON — Heavily bearded oilfield worker Greg Forse believes men who prize long, bushy facial hair should be able to pursue their "beard journey" — even if they live on a tight budget.

Despite the prolonged slump in oil and gas prices, he and his wife, Nicole Forse, said they decided to go pro late last year. The result is Forse Beard Co., the Bloomfield couple's family business dedicated to helping the hirsute with the daily upkeep of facial hair.

“Nowadays, barber shops are coming back to life. Men are now allowed to take care of themselves. In the '50s they were, too, but it was largely a clean-cut look. ... It's history repeating itself. Look at the 1880s, there were a bunch of bearded men walking around.”

After turning part of their home into a small manufacturing lab last year — walling it off with a battery of screen doors to protect their two small children — the couple are now busy most nights testing and creating small batches of beard oils and butters, mustache wax and "outlaw" pomade. The Forses recently introduced "beard whiskey," a two-in-one shampoo and conditioner just for beards.

Their products come in a variety of scents for the bearded "outlaw" who may ride a Harley, but who doesn't want to be taken for the grimy Lone Biker of the Apocalypse in the Coen brother's film "Raising Arizona."

The Forses are natural entrepreneurs, they said, because they don't want to work for anyone else and they both enjoy creating products and exploring their potential. And their business plans aren't limited to hair care products.

Just before the couple launched their beard company, Nicole Forse rolled out her cake and bakery business, Niki's Sweet Treats, in October. 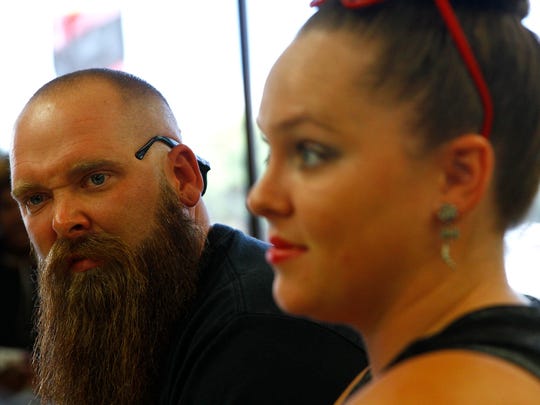 They said launching multiple businesses during a downturn was less of a gamble and more of an adventure.

Greg Forse said the cultural pendulum has swung back in favor of grooming products dedicated to daily beard upkeep.

"Nowadays, barber shops are coming back to life," he said. "Men are now allowed to take care of themselves. In the '50s they were, too, but it was largely a clean-cut look. ... It's history repeating itself. Look at the 1880s, there were a bunch of bearded men walking around."

"Beards are in," Nicole Forse added. 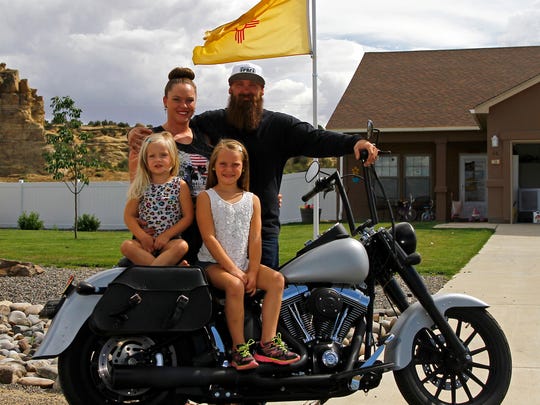 Forse Beard Co. owners Nicole and Greg Forse pose for a portrait with their daughters Klhoe and Kyla Forse on Wednesday at their home in Bloomfield. (Photo: Jon Austria/The Daily Times)

The business has a solid customer base with one group, he said. While a number of oilfield workers — even some energy company executives — sport bushy beards, it's bikers, he said, who tend to consistently wear them, decade after decade.

So far, beard products are selling well at a few barber shops in San Juan County, he said.

One of those is the Main Barber Shop II in Hillside Plaza across from Walgreens where barber Jesse Rogers cuts hair — and trims beards.

Rogers was a casualty of the oilfield "bust" last year, which prompted his career change.

Rogers, who sports a plentiful beard like Forse — both also are bikers — said the number of men with beards is growing.

The Main Street barber shop carries the Forses' products in a treasure chest display by the front counter. Rogers said that thanks to the Forses' beard oils and balms, he has begun to achieve a beard condition and quality he wasn't sure was possible on his tight budget. His customers are noticing and embracing the well kept beard lifestyle, he said. 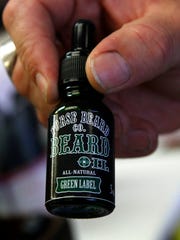 "I use (Forse's products) daily since he started making them," Rogers said. "Early on, in the morning, my beard was facing four directions and my face was itchy. I didn't know what I was doing. Now it's got a shine to it and it's clean. The whole scuzzy beard of the 1970s is out of the window."

FBC Outlaw Pomade comes in two scents — one with a "classic barber shop scent" and one that exudes a piney scent, Rogers said.

Greg Forse said the company plans to expand slowly, as the couple creates new products or scents for existing ones. He said that he plans to produce and star in beard-care how-to videos for customers.

Overall, Forse said the biggest challenge beard enthusiasts struggle to overcome is to grow it out and fight the urge to shave it off.

“Time, a family and a beard will teach you patience.”

He said that living with attention deficit disorder has actually been a plus to his work ethic and productivity.

"ADD, it's a real thing. I'm all over the place, but that's what's got me into the beard business," he said. "With our balm and butter and Nicole's cakes and what I do in the oil and gas industry, it's definitely a blessing. A lot of a successful business owners have it. It gives me the ability to basically be all over the place. ... It just takes patience. It took years. Time, a family and a beard will teach you patience." 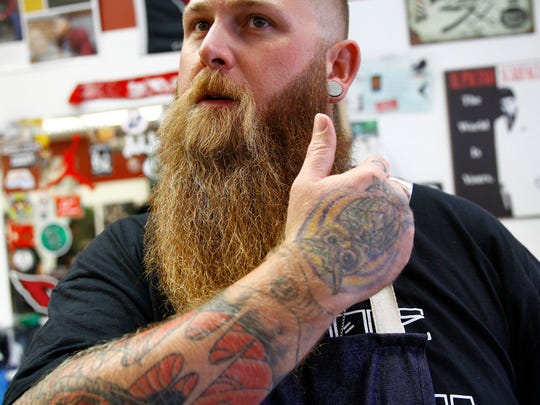 Where: FBC beard products are available at Main Barber Shop in Farmington