Economy added booming 266,000 jobs in November and the unemployment rate fell to 3.5%

Economy added booming 266,000 jobs in November and the unemployment rate fell to 3.5%

Resume and cover letters are a stressful part of an application. Because every word and detail matter, there are a few cliche phrases you should avoid. Buzz60

Hiring picked up in November as employers added a booming 266,000 jobs, underscoring a healthy U.S. economy that has withstood trade jitters and sluggish global growth.

The gains, which eased recession fears, far outpaced the 184,000 expected even after accounting for the return of striking General Motors workers. And the strong job totals could help President Trump as the 2020 election draws closer.

The unemployment rate fell from 3.6% to 3.5%, matching a 50-year low, the Labor Department said Friday.

The robust showing highlights that consumer spending and the service sector largely remain insulated from the manufacturing industry's troubles, which are linked to the U.S. trade war with China and a weak global economy. The report also affirms the Federal Reserve's decision to stay on hold after cutting interest rates three times this year because of the recession risk generated by the trade and manufacturing woes. Fed policymakers are set to meet next week but no action is expected.

"Despite uncertainty on the trade front and softer global growth, the labor market has been remarkably resilient," says economist Leslie Preston of TD Economics.  "With reports like this, the (Fed) can sit comfortably on the sidelines."

A six-week GM strike held down employment by 46,000 in October and that dampening effect was expected to reverse last month since the factory workers were back on the job.

Other forces also may have skewed the numbers in November. Widespread worker shortages could have prompted employers to pull forward hiring or minimize layoffs -- a strategy that often occurs in November during tight labor markets, Goldman Sachs said.

At the same time, Midwest snowstorms likely reduced payroll growth by about 10,000, Goldman said. And the late Thanksgiving may have curtailed job gains in retail, the research firm said. Retailers added just 2,000 jobs after adding 22,000 in October. Since Labor’s survey is conducted mid-month, it may have missed holiday workers added shortly before Black Friday. 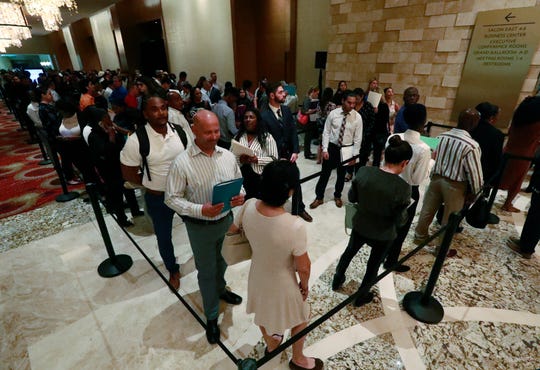 More generally, average monthly job growth has downshifted to a still-solid 180,000 this year from 223,000 in 2018, though the latter figure has tentatively been revised down. Many economists expect gains of only about 100,000 next year because of both a slowing economy and a low jobless rate that’s making it harder for businesses to find qualified workers.

Consumer spending, which accounts for about 70% of economic activity, has remained on solid footing. But business investment and manufacturing have pulled back amid a sluggish global economy and uncertainty generated by Trump’s trade war with China.

As the 2020 election draws near, job creation under Trump is likely to be scrutinized more closely. The federal tax cuts and spending increases he spearheaded spurred more hiring but his trade fights and immigration crackdown likely have offset much of the gains, leading economists say.

Trump and jobs: Has Trump fulfilled his pledge to turbocharge job growth, revive manufacturing? Many say no.

Holiday savings: Target's gift card sale is coming back. Here's what you need to know and how to save 10%

Yearly pay increases shot past 3% last year as employers jostled for a limited supply of workers but they’ve slowed this year. That has curbed income gains for American households but helped keep a lid on inflation, allowing the Fed to cut interest rates without worrying the moves would rev up the economy and lead to a spike in consumer prices.

Industries that are hiring

Health care led the job gains with 60,000 while manufacturing added 54,000, the largest monthly advance for the industry since 1998 but a tally that was inflated by the return of the GM workers. Motor vehicle and parts production added 41,000 jobs.

The share of Americans working or looking for jobs fell to 63.2% from a six-year high of 63.3%. That’s a small change but if the rate continues to trend down it could mean the supply of disabled people, those with less education and others on the sidelines of the labor market is starting to run thin.

Over time, that trend could limit the number of available workers, further push down the unemployment rate and push wages and inflation higher.

Until the improving labor market began drawing in idle workers the past few years, the labor force participation rate had been falling as baby boomers retire.

This was a blockbuster report that showed the struggling manufacturing industry hasn’t yet significantly affected American consumers and the generally healthy services sector, allaying worries that a recession may be looming. It solidifies the Fed’s decision to stay on hold after three rate cuts since late July.

As the United States celebrates equal pay day, a new study finds that there are a few occupations that still lag behind in gender wage equality. Veuer's Natasha Abellard has the story. Buzz60