The twin 'Property Brothers' are stars of HGTV

Fans expect a lot from the home-renovating team, and Drew and Jonathan Scott deliver.

The twin 'Property Brothers' are stars of HGTV 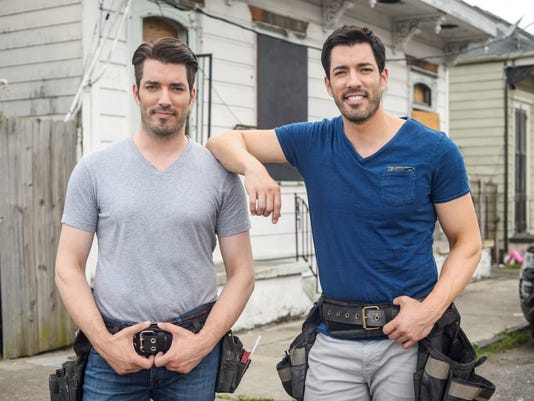 If you watch HGTV, you know the identical-twin Scott brothers.

Drew and Jonathan Scott are a cottage industry on the cable lifestyle and home network, where they first appeared in April 2011. With four regular series — Property Brothers, Property Brothers: Buying and Selling, Brother vs. Brother and Property Brothers at Home — they're adding a fifth, Brothers Take New Orleans (Wednesday, 9 ET/PT).

“The Scott brothers are synonymous with HGTV,” says Allison Page, programming chief at Scripps Networks Interactive, which includes HGTV, Food Network and Travel Channel.  “We have a (new episode) with them almost every week of the year, which is a really startling amount. … It's close to 50 premieres a year. They're in a whole other league.”

With the four-episode New Orleans show, the Canadian-born brothers, 38, are bringing their affability and talent  to the Big Easy and giving back to the community.  Page says that marks a perfect opportunity as the network mapped how to "do something that had a little of a holiday bent” with the brothers.

What makes the Canadian-born siblings a good fit for HGTV? "They're relatable," says Page. They have a good-natured competitive spirit."

“The competition is always fun,” Jonathan says, adding that this project was special because “we knew that the big thing was we're giving this home back to the community. We were always looking at the big picture and the person we were helping.”

With the St. Bernard Project, a New Orleans-based non-profit organization whose mission is to reduce the time span between disaster and recovery, the Scotts work on competing renovation projects in a double shotgun house. Each brother takes one residential unit to renovate and design. Among the celebrities stopping by to check on the renovations and judge weekly challenges: NCIS New Orleans star Scott Bakula and NBC’s Today show host Hoda Kotb. 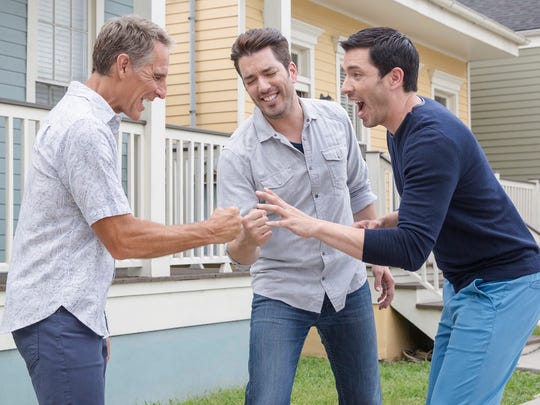 As with their other shows, this series doesn’t just focus on the work. The brothers, who previously were fans of the city, visit an alligator farm on a side trip, “one of my favorites,” says Drew. “Jonathan didn't want to do it because he figured we were too busy. But I was like, ‘We're in New Orleans. You have to enjoy.”

As if a side trip isn't enough, there are brotherly hijinks. While working on his house project, “I hear this rustling in my tool room in the closet," Jonathan says, "and I look over and there's a gator in the house where I'm working. It's like this 4 or 5-foot gator. I thought either Drew's trying to kill me, or he's taking pranks to a whole new level.”

It's not just a family affair. The brothers recruited celebrity pals to pick whose room design was best in weekly challenges.    “We love to have our friends come in and judge us and judge the space," Drew says. "If today they feel like a Team Jonathan person or if they like the color purple more than green, they can judge us literally on anything they want, and I think that's one of the things that our fans love about the competition shows that we do. We don't prep it. We don't plan it. We let them pick whatever they want.”

Spontaneity in front of the camera comes easy for the guys. "The difficult thing for us is the time," says Drew. "We shoot 60 episodes a year. It's a lot on the go and that doesn't include all the renovations we have on properties outside the shows." He notes that their Scott Brothers Entertainment creates other projects. . The twins also have a best-selling book (Dream Home: The Property Brothers’ Ultimate Guide to Finding & Fixing Your Perfect House) and a home furnishings line, Scott Living, sold at places such as  Lowe's and on QVC.

The brothers also are masters of social media.  "We have a very strong connection to our fans," Jonathan says, with more than half a million messages sent to them each week. "We have a team that filters through those, and they send us suggestions."

And when fans identify things "that they love and that they'd love to see more of, we take that feedback from social and the next day we'll implement that in the shows, because we shoot year-round," Drew says. "We don't wait until the end of a season to change something. We adjust things right away."