FARMINGTON —The newly hired superintendent for Aztec Ruins National Monument and Chaco Culture National Historical Park has two keys for living a healthy life: walk a lot and have pets.

He stressed the importance of taking at least 5,000 steps each day.

"That’s what we need to help everyone to do," said the 54-year-old. 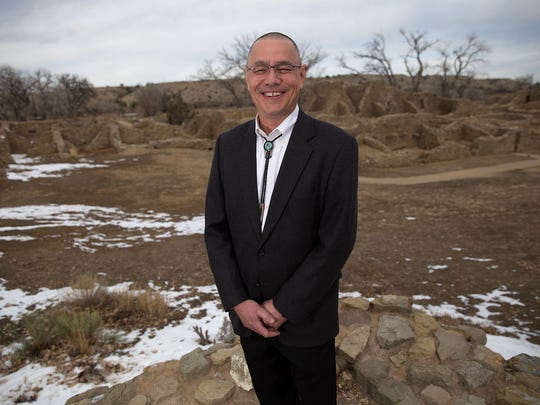 Quijano-West has worked for the National Park Service for more than 30 years. He got his start in the summer of 1984 when, as a college student, he worked for the park service as a translator — he speaks Swiss and studied cultural anthropology and foreign language at the University of Texas at El Paso — at the Olympic Village in Los Angeles.

“I started as the lowest level of being a park ranger and I made it all the way to be a superintendent.”

Quijano-West said he worked at several other NPS recreation areas — including at one point Petroglyph National Monument in Albuquerque — before landing his first position as a superintendent at Springfield Armory National Historic Site in Massachusetts.

"I started as the lowest level of being a park ranger and I made it all the way to be a superintendent," he said.

"Then I got the bug to come back home," he said.

Quijano-West is an El Paso native and has family in New Mexico. He spent his childhood hiking and camping in New Mexico, so he said moving to Aztec was like returning home.

Now, he hopes to continue the work started by his predecessor to, in conjunction with the city of Aztec, connect Aztec Ruins with downtown Aztec through a trail system.

He already has a vision for the two parks he oversees. Quijano-West said trails and open spaces will become more important as Aztec grows, and that can help the economy by attracting tourists who want to see the landscape and Native American culture.

"We have all the ingredients right here," he said.

The key to promoting sustainable tourism, according to Quijano-West, is promoting and expanding the river trail. He said if it could be extended to Durango, Colo., the trail system would provide tourists days of outdoor activities ranging from walking to rafting.

The Bureau of Land Management is offering free passes to fourth-graders to encourage them to tour the nation's national parks and monuments. In this 2015 file photo, fourth-grade students and chaperones from Park Avenue Elementary School walk past the Great Kiva at Aztec Ruins National Monument. (Photo: Daily Times file photo)

Quijano-West said he plans to work with local communities and tribes to find ways to promote not only National Park Service areas but also state, tribal parks and community parks.

He also has plans to reach out to the younger generation, including meeting with student councils and asking them how to make parks more inviting. Ultimately, he said he would like to start a program to train "the next generation of stewards for our national parks."

Quijano-West said national parks, which belong to the public, can be a meeting ground for people fromall walks of life.