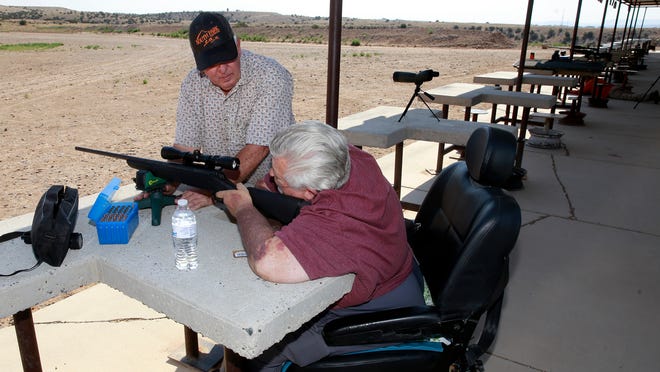 Bloomfield resident Craig Hunter got the idea to start the program after volunteering for six years with Outdoor Buddies, a Colorado-based organization that helps disabled individuals participate in activities such as hunting and fishing.

Through that program, Hunter mentored students with mobility disabilities in the hunting program. He said he wanted to bring a similar concept to Farmington.

"I think it would be a good thing for them," Hunter said. "I think it serves a purpose."

Hunter presented his idea to the San Juan Wildlife Federation board on June 7, and members approved implementing it, said Steve White, a board member and a security officer at the shooting range.

"We didn’t really have anyone that had experience helping those that are disabled when Craig volunteered to take that over," White said. "It gives them a sense of confidence."

The program, which meets on the third Thursday of each month, has had a slow start. On its first day June 21, 70-year-old Carey "Kirt" Stidman was the only person who attended. The Bloomfield man is Hunter's brother-in-law.

Hunter spent most of the session adjusting the scope of Stidman’s rifle, which had never been fired.

Stidman said he purchased a Remington 770 bolt-action rifle last year because he wanted to start shooting again. Before June 21, the last time he fired a gun was in 2013.

“It’s great,” Stidman said, describing the program. “(Shooting) used to be one of my favorite things to do."

Stidman said he uses a wheelchair due to his extremely arthritic knees. He also carries an oxygen machine to help him breath.

When Stidman was in an induced coma at age 25, he said the ventilator was turned up too high and the pressure of the oxygen sheared his heart and lungs.

He was diagnosed with chronic obstructive pulmonary disease, which makes it difficult to breath. Stidman said he was also diagnosed with atrial fibrillation on the right side of his heart that causes an irregular and rapid heartbeat.

At age 21, he lost most of his right hand in an accident a a saw mill.

During the session last month, Stidman approached his rifle, which Hunter set up on a stand at a table at the range. He braced the rifle’s barrel with his right arm and placed his left hand on the trigger as he looked down the scope.

After firing the first bullet, Stidman recoiled from the kickback, shouting a surprised expletive.

"It makes me feel a little more free about what I can do," Stidman said later about the experience. He fired the rifle twice during the session.

Stidman said he hopes to add a muzzle brake to the rifle to counter the recoil. He also plans on making other modifications to better brace the rifle on account for his right hand.

Hunter hopes to recruit more people for the program in the future, adding that he has several volunteers ready to assist him.

What: Shooting program for disabled individuals
When: 9 a.m. on the third Tuesday of each month
Where: San Juan Wildlife Federation gun range, 5652 U.S. Highway 64 in Farmington
More info: For more information, call 303-514-7810 or email craigdellhunter@gmail.com