Sean Keil, of Farmington, has been practicing parkour since he was a teenager. He practices the activity here on April 23 at Brookside Park in Farmington.(Photo: Virginia A. Jones/Special to The Daily Times)

FARMINGTON — Parkour can often be misunderstood by those on the outside.

While the activity has gained acceptance in urban areas, such as Salt Lake City and Denver, there are also practitioners, called traceurs, in Farmington.

"Lots of people think of parkour as 'stunt' work, and some groups like that," said Sean Keil, a Farmington resident who has been involved in the activity since he was a teenager.

But for him and his wife, Natalie, parkour is not about stunts. Rather, it is a way to challenge themselves and build mental and physical strength in the outdoors. 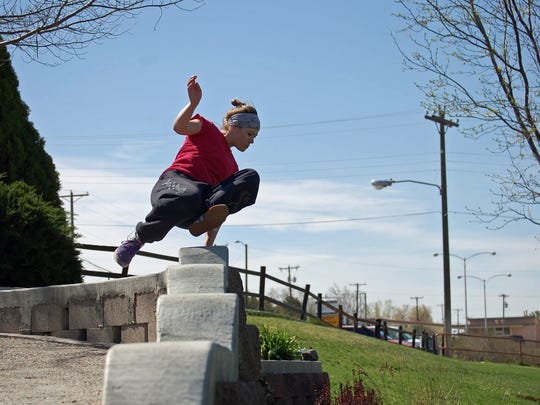 Natalie Keil vaults a wall while practicing parkour April 23 at Brookside Park in Farmington. (Photo: Virginia A. Jones/Special to The Daily Times)

“It’s safer than you’d assume, especially if you are diligent in warming up, checking the area, checking your own stability.”

"It’s safer than you’d assume, especially if you are diligent in warming up, checking the area, checking your own stability," Natalie Keil said.

The couple follows a European style of parkour, which relies on heavy conditioning to warm up.

"Strength, control, coordination, stamina — all using your own body weight is the workout system based on the French Natural Method," Sean Keil said.

He explained that training is focused on progressing through basic moves that include running, jumping, climbing, crawling, vaulting and hanging.

The goal is to move through an area riddled with obstacles seamlessly, in a flowing series of movements. 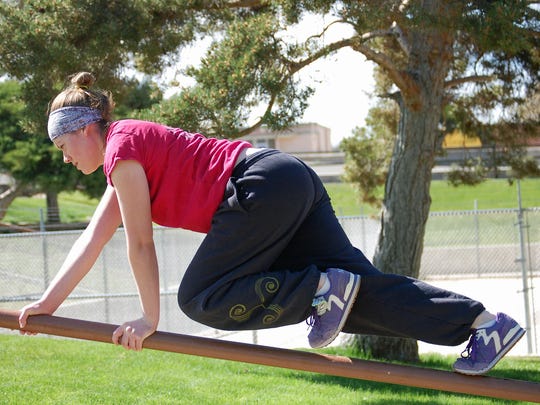 Natalie Kreil crawls along a rail on April 23 while practicing parkour at Brookside Park in Farmington. (Photo: Virginia A. Jones/Special to The Daily Times)

The French Natural Method originated as a way to train the military, according to the parkour organization, Parkour Generations. It later was used to train firefighters and emergency personnel. In the late 1980s, it was adapted by Raymond Belle and his son, David, who named it parkour.

Sean Keil, who grew up in Japan, trained in dance and climbing before he discovered parkour after watching a video in 2003.

“You push past your comfort zone and flirt with fear every day. It’s a mental game — you’re fighting yourself, your own mental block. Repetition is key, and the progress is slow, in order to work safely.”

He has since met several of the sports’ founders, called the “Yamakasi,” and he and his wife sponsored workshops with them in Salt Lake City and Houston.

Natalie Keil was introduced to the sport while the couple was dating. Unimpressed at first, she has since become an enthusiast.

"You push past your comfort zone and flirt with fear every day," she said. "It’s a mental game — you’re fighting yourself, your own mental block. Repetition is key, and the progress is slow, in order to work safely."

The couple hopes to educate the public about the sport. A major barrier to training, they said, is people’s misunderstanding of the activity. And that can make it difficult to train without interference.

While the Keils prefer to practice outside, parkour can also be learned in a gym, and that’s what another Farmington practitioner is doing.

Taylor Winer teaches parkour classes at the Farmington Gymnastics Academy. He said he was intrigued by parkour when he saw it in action movies. So he taught himself the sport through popular YouTube videos.

Winer’s classes begin with stretches and warm-up exercises and progress to fundamental movements.

One key approach is completing movements, such as vaults, handstands, summersaults, flips and hands, safely.

Once students master basic moves in the gym with spotters and mats, they move outside.

"Parkour is being able to move from point A to point B as quickly, efficiently and with maximum style as possible," Winer said. 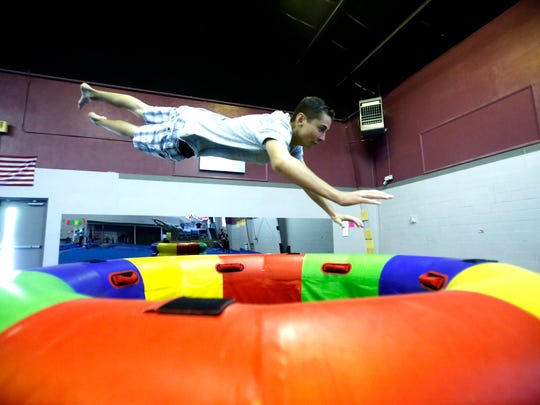 Mark Yerkey dives over an obstacle during parkour practice on May 7 at Farmington Gymnastics Academy. (Photo: Jon Austria/The Daily Times)

There are now international parkour competitions, and Winer said he would like to enter those in the future.

Many areas also have free-form groups that workout together, much like autonomous, loosely-knit clubs.

"It’s more fun when you have friends with you; they see the routes differently," Winer said. "That adds creativity, almost like choreography."

Virginia A. Jones covers the outdoors for The Daily Times.

Learn more about parkour classes by contacting the Farmington Gymnastics Academy at 505-258-4417. Sean and Natalie Keil can be reached at smichael.keil@gmail.com.

Generation Yamakasi: This video follows several parkour founders around Paris, showing movements in action. It contains interviews with the founders, as well as the history of early parkour and the establishment of the Yamakasi.

Parkour Pilgrimage: This YouTube video explains the purpose of parkour movements, as well as how much conditioning and effort go in to the practice.

"Cine Parkour": This book and DVD combination is Julie Angel’s doctorate thesis on parkour. The DVD is a series of smaller films that reflect the essence of parkour — function and efficiency, aesthetic and style, mentality and purpose — through  interviews with practitioners.